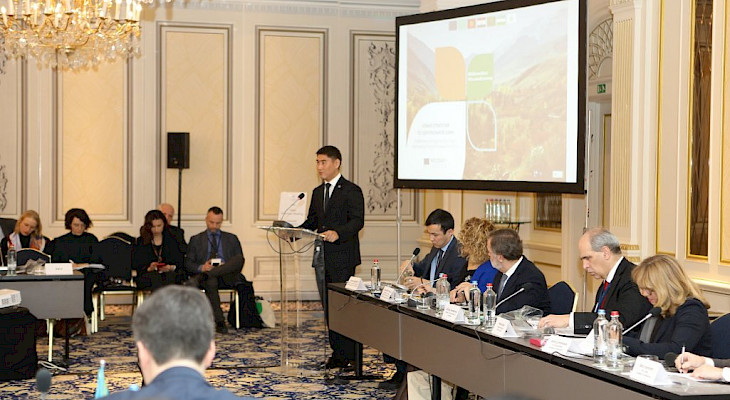 As part of the working visit to EU institutions, Minister of Foreign Affairs of Kyrgyzstan Chingiz Aidarbekov, as an honorary guest addressed the opening of the 9th meeting of the European Union-Central Asia Working Group on Environment and Climate Change (WGECC) in Brussels.

Kyrgyzstan’s Foreign Minister delivered speech at the invitation of the European side, the press service of the Kyrgyz Foreign Ministry said on Friday

In his speech Aidarbekov informed the meeting participants about the negative effects of climate change, observed in Kyrgyzstan and Central Asia as a whole, as well as measures taken by the country to adapt to climate change, including a special place of the development of green economy in the Kyrgyz Republic.

Chingiz Aidarbekov stressed cooperation in the field of climate and ecology is one of the priorities of Kyrgyzstan's foreign policy, and noted the country has increased efforts on environmental diplomacy to practically address the problems associated with climate change and its impact, in particular, the melting of glaciers, rehabilitation of uranium tailings.

He reaffirmed Kyrgyzstan's commitment to the UN Sustainable Development Goals and the Paris Agreement, and called on the countries to implement them.

At the same time, the Kyrgyz FM stressed the importance of consolidating the efforts of states, international and non-governmental organizations, the civil sector and business communities in combating climate change and adapting to its consequences at all levels of interaction

He said the first Economic Forum entitled “EU-CA Partnership for Action on Green Economy" will be held in Bishkek in summer 2020 as part of the implementation of the EU-CA Cooperation Concept.

Foreign Minister of Kyrgyzstan Chingiz Aidarbekov invited all interested parties to take part in the Forum.

More than 100 participants including representatives of EU institutions, government officials and national experts from Central Asia, EU Member States, international financial institutions, as well as international and regional partners and civil society representatives gathered at the 9th meeting of the EU–Central Asia Working Group on Environment and Climate Change (WGECC) on February 12-13 in Brussels, The Times of Central Asia reported.

The parties had a constructive dialogue on circular economy, the European Green Deal, as well as other issues related to water, environment and climate change, the Delegations of the European Union to Central Asia countries reported on their websites.