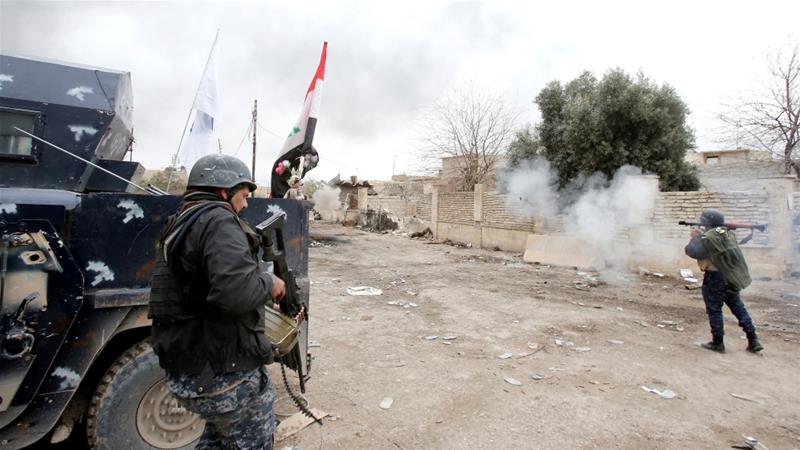 Aljazeera (23 March 2017)
Scores of civilians - including many women and children - have reportedly been killed in west Mosul over the past few days as Iraqi forces push through narrow streets and closer to the Old City, ISIL's last stronghold in the country.

The city's mayor, Hussein Ali Khajem, said on Thursday more than 150 people have been killed in clashes and air strikes since Monday.

It was not immediatly clear if the bodies of fighters from the Islamic State of Iraq and the Levant (ISIL, also known as ISIS) were among the dead.
The Kurdish news agency Rudaw put the death toll at 200 and said at least 130 people were killed by strikes on one residential building in the New Mosul neighbourhood.

The Iraqi Civil Defence claimed they pulled 136 bodies from the rubble in the New Mosul district of the city.

Al Jazeera's Stefanie Dekker, reporting from Erbil in northern Iraq, said fighting in the area had intensified in the last few days.

"For more than a week there was a stalemate as Iraqi forces struggled to advance on the Old City, but in the last few days the fighting has intensified.

"There are air strikes and ISIL is also using civilians homes with civilians in them. People have been caught in crossfire and targeted by ISIL... The shelling is indiscriminate," said Dekker.

"There is no safe passage out of the city. Civilians are literally everywhere."
Supported by the US-led coalition bombing ISIL in Iraq and Syria, Iraqi forces began their push against west Mosul on February 19.

Airwars, a London-based organisation that monitors international air strikes in against ISIL, said in a tweet earlier this week as many as 440 civilians had been killed by coalition raids in both Iraq and Syria over the past week.
The latest gains have brought government troops and police closer to Mosul's densely populated Old City, where hundreds of thousands of civilians are trapped under ISIL rule.

The Iraqi government says 65,000 people have left Mosul in an attempt to escape the fighting, while the Switzerland-based International Organisation for Migration says the number is 51,000.

However, the number who have fled is still just a fraction of the 750,000 people believed to have stayed on in west Mosul under ISIL rule.

ISIL seized large swathes of land in Syria and Iraq in 2014, and declared a cross-border "caliphate" with Raqqa as its capital.

But Iraqi forces, including tens of thousands of Iran-backed Shia fighters, have since regained most of the territory they lost.

The eastern side of the city was recaptured in a three-month offensive that ended in January, but the west, with its densely populated maze of narrow streets, is thought to pose a greater challenge.

Surrounded by a diverse array of forces, the remaining ISIL fighters are digging in for a fight to the end, using car bombs, snipers and grenade-laden drones to slow the troops' advance.