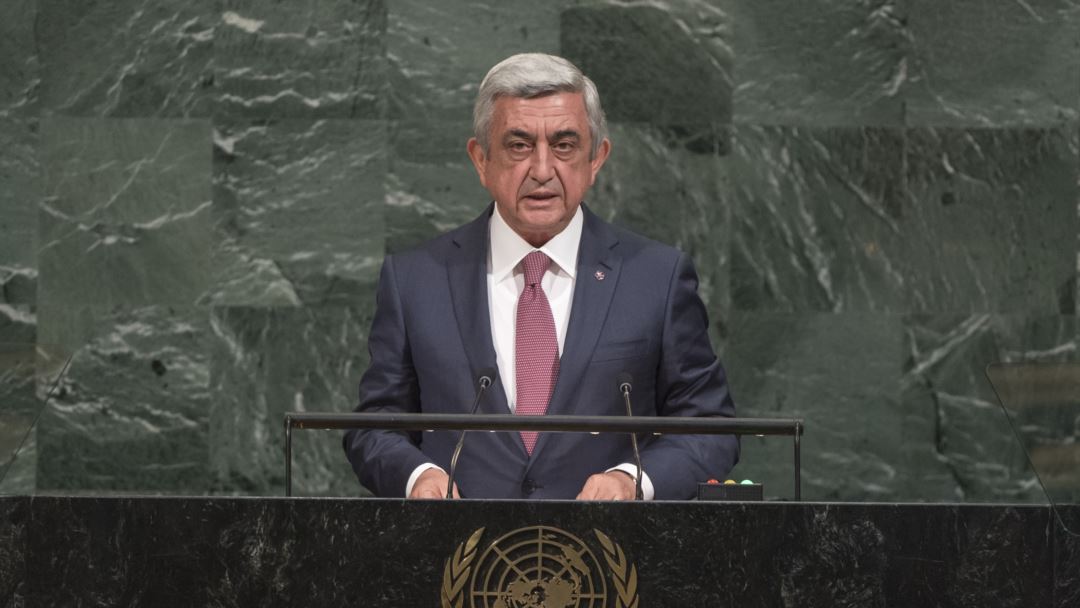 On the 72nd session of the United Nations General Assembly (UNGA), the Armenian President Serzh Sargsyan has taken the floor. The focus of Sarkisian's speech was again Turkey.

Sarkisyan stated in his speech that the Protocols signed on October 10, 2009, regarding the establishment and normalization of diplomatic relations between Turkey and Armenia, would be declared null and void if Turkey does not take a step. Sarkisyan also said that Turkey uses the protocols just as it would for the benefit of Turkey[1]. Sarkisyans words is distorting the facts. It is known that Armenia has signed the Protocols under pressure. After signing the Protocols, Armenia is also the one way that interpret the protocols one-sidedly and instigate Turkey.

The protocols have not been approved by Turkey nor Armenia until this day. In Turkey, it is on parliamentary agenda, and no negative explanation has been made on how the process would proceed. Armenia proclaimed that they froze the withdrawal of the Protocols long before Sarkisyan spoke at the UN. However, Sarkisyan said that these protocols, which were officially shelved and already put on the back burner by Sarkisyan after the signing. Sarkisyan repeatedly underlined the fact that the Mount Ararat was the  symbol of Armenia, contrary to the spirit of this accord and international conventions, and went further and gave advice to the youth:

"Taking Ağrı depends on your generation. For instance, my generation have successfully fulfilled their duty. In the 90's we saved the part of our country, Artsah (Karabakh region), from the enemy. Every generation has a mission. It is up to you and your unity that you will fulfill your duty in the future like we did. We, the Armenian nation, have always been able to rise from the ashes of the phoenix.[2]"

Immediately after the signing of the Protocols, the decision of the RA Constitutional Court dated 12 January 2010 does not serve any purpose other than provoking Turkey. It has been observed that certain articles of the decision of the protocol are restricted and some prerequisites are introduced[3]:

The definition of "Western Armenia", which is mentioned on Article 11[5] of the Armenian Declaration of Independence, today marks the borders of the Republic of Turkey. The Ministry of Foreign Affairs of the Republic of Turkey also stated that this attitude cannot be accepted. It is emphasized that Turkey, in line with its accustomed allegiance to its international commitments, maintains its adherence to the primary provisions of these Protocols[6].

Sarkisyan called on the Azerbaijani government to recognize and respect the right of the illegitimate regime in Azerbaijani territories occupied by Armenia and the right of people to self-determination of that region. This approach is contradictory to the principles of the UNGA. Despite, Sarkisyan was able to demonstrate these expressions to the UNGA and to take a position far from common sense.