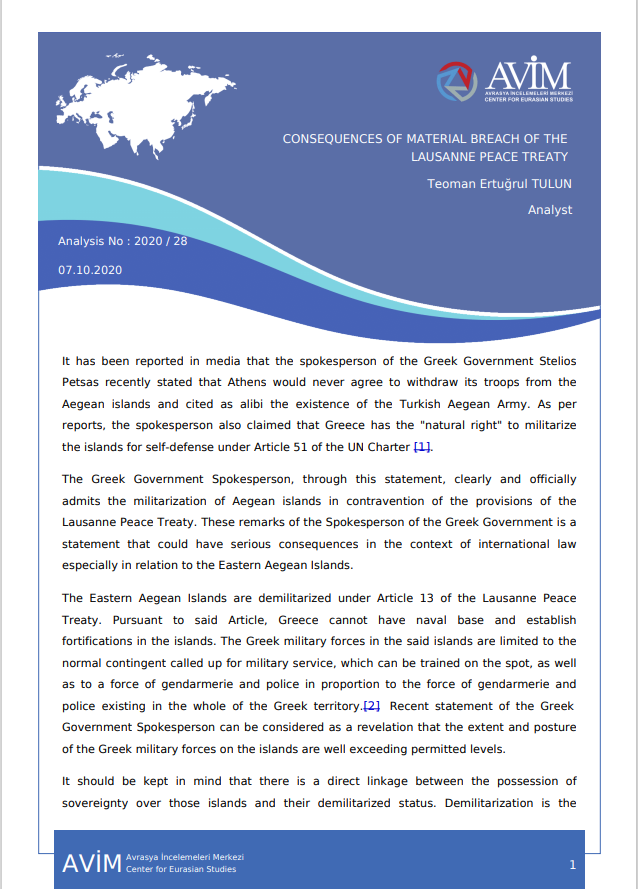 It has been reported in media that the spokesperson of the Greek Government Stelios Petsas recently stated that Athens would never agree to withdraw its troops from the Aegean islands and cited as alibi the existence of the Turkish Aegean Army. As per reports, the spokesperson also claimed that Greece has the "natural right" to militarize the islands for self-defense under Article 51 of the UN Charter. The Greek Government Spokesperson, through this statement, clearly and officially admits the militarization of Aegean islands in contravention of the provisions of the Lausanne Peace Treaty. The Eastern Aegean Islands are demilitarized under Article 13 of the Lausanne Peace Treaty. For the Eastern Mediterranean Islands, "material breach" of the Treaty provisions relating to "demilitarization" can be considered within the context of the Article 60 of the 1969 Vienna Convention on the Law of Treaties which enables the suspension of the certain provision as a consequence of its breach. It should be mentioned in this context that no international document has even implicitly given Greece the right to militarize the islands in question. Besides that except for the circumstances stated in the United Nations Charter, the principle of self-defense cannot be arbitrarily evoked. As for the Aegean Army of Turkey, it should be underlined that contrary to the status of the Eastern Aegean Islands, the Turkish territories of the Aegean region are not under any demilitarized status. As noted above, the demilitarization provisions are essential to the accomplishment of the purpose of the 1923 Lausanne Peace Treaty. In this context, it is worthwhile to remember how İsmet Pasha as head of the Turkish Delegation explained the Turkish views on 25 November 1922 in the Territorial and Military Commission of the Lausanne Conference regarding the sovereignty and demilitarization of the said islands. He said in this respect that "The Aegean islands, which depended geographically on Asia Minor, were of great importance for the peace and security of Anatolia." As per the assessments of academic sources, the demilitarized zones in Thrace were abandoned by the Thessaloniki Agreement signed on 31 July 1938 between the Balkan Entente countries (Greece, Romania, Turkey and Yugoslavia) and Bulgaria. It should be stated that the militarization of the Dodecanese Islands is another alarming development that should be emphasized regarding the demilitarized status of islands. These islands, together with the Samothrace and Lemnos islands which were placed under demilitarized status in the Lausanne Convention Relating to the Regime of the Straits, are part of the political and strategic balance created in the general framework of the Lausanne Peace Treaty. Lemnos and Samothrace placed under a strict demilitarized regime due to their vital importance to the security of Turkey by virtue of their close proximity to the Turkish Straits. It should be mentioned that the Dodecanese Islands were ceded to Greece with Article 14(2) of the 1947 Paris Treaty of Peace between the Allied Powers and Italy on the explicit condition that they must remain demilitarized. Greece was militarized also these islands, including the Meis (Castellorizzo) which only a Nautical Mile away of Turkey's southern coast, in contravention of the clear demilitarization provision of the 1947 Paris Treaty. In fact, the Thessaloniki agreement sets an example of how the demilitarization provisions of a multilateral treaty can be lifted through mutual agreement. It should be kept in mind that the "material breach" of one of the basic articles of the any peace treaty might end up with an outcome that makes sovereignty over the islands mentioned in the corresponding article of the treaties which their provisions materially breached, questionable. In the light of the foregoing, it is to be emphasized that demilitarization clauses are sine quo non for the Aegean status quo.