THE 66TH ISSUE OF ERMENİ ARAŞTIRMALARI JOURNAL HAS BEEN PUBLISHED
Share : 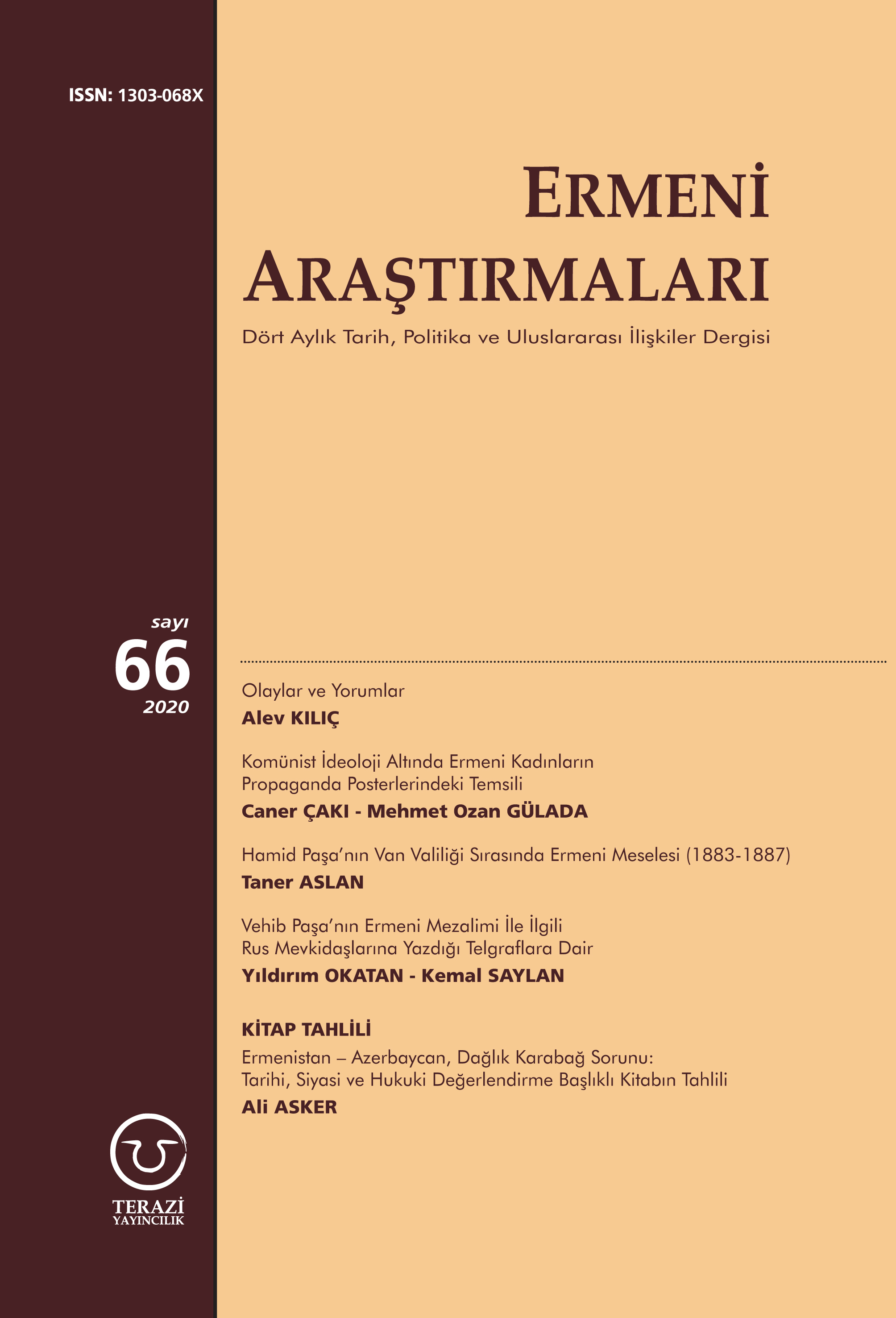 The 66th issue of Ermeni Araştırmaları journal has been published.

The 66th issue contains 5 articles in total, including three research articles, one editorial, and one book review. As always, the editorial titled “Olaylar ve Yorumlar” (Facts and Comments) written by Alev Kılıç, covers the relations between Turkey and Armenia, and also the domestic and international developments of Armenia. In this respect, the developments from the end of April to August 2020 are considered. Skirmishes started in July between Azerbaijan and Armenia reveals Armenia’s aggression once again. These developments, following closely by Turkey, are evaluated thoroughly in the article titled “Olaylar ve Yorumlar”.

The first research article in 66th issue is an article titled “Komünizm İdeolojisi Altında Ermeni Kadınların Propaganda Posterlerindeki Temsili” (The Representation of the Armenian Women in Propaganda Posters under Communist Ideology) written by Caner Çakı and Mehmet Ozan Gülada. Çakı and Gülada, studied the propaganda posters prepared under the communist ideology in Armenian Soviet Socialist Republic. The role of Armenian women in the society is analyzed through these posters in the scope of semiotics.

The second article is “Hamid Paşa’nın Van Valiliği Sırasında Ermeni Meselesi (1883-1887)” (The Armenian Question During Hamid Pasha's Governorship of Van (1883-1887)) by Taner Aslan. Aslan, examined the policies implemented by Hamid Pasha who was appointed as a governor of Van which was accepted as an important city by Armenian nationalists and missioners. In this context, the reports sent to the capital and the measures taken by Hamid Pasha are evaluated.

The third article in this issue titled “Vehib Paşa’nın Ermeni Mezalimi İle İlgili Rus Mevkidaşlarına Yazdığı Telgraflara Dair” (About Vehip Pashaʼs Telegrams to His Russian Counterparts on the Armenian Atrocities) is written by Yıldırım Okatan and Kemal Saylan. This study by Okatan and Saylan is a revised version of a conference paper which was presented at the I. International Social Science Congress in Mersin held between 14 and 16 March 2019. Okatan and Saylan evaluated the telegrams between the Ottoman and Russian commanders in the light of a document in the Georgian State Archive. It is an important archive study in terms of containing mutual correspondences about the activities of Armenian committees and revealing the actions of Armenian nationalists in Anatolia from a source other than Ottoman sources.