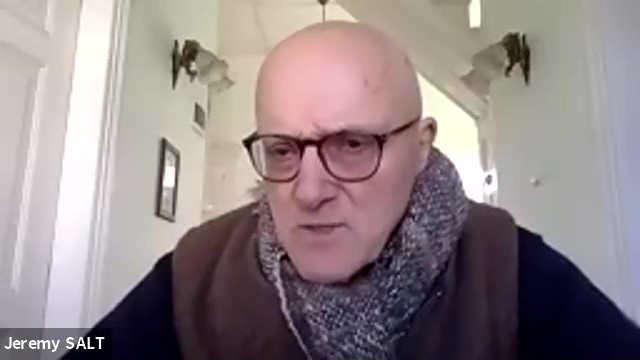 On 26 November 2020, the lecture titled "The Last Ottoman Wars: The Human Cost, 1877-1923", at which the main speaker was Professor Jeremy Salt (a retired academic who taught courses at  Melbourne, Boğaziçi, and Bilkent Universities),  was held online.

In his presentation based on his latest book titled The Last Ottoman Wars: The Human Cost, 1877-1923 (University of Utah Press, 2019), Professor Jeremy Salt firstly mentioned his curiosity concerning the suffering of the Ottoman Empire's civilians between 1877-1923 and how this curiosity pushed him to write this book. The existence of very few studies on how successive uprisings and the wars affected the Ottoman civilian (especially Muslim) population was one of the main factors that drove Professor Salt into deciding to focus on this subject. He thoroughly expressed why he chose to investigate the period covered by the book and his opinions considering the developments in this period. He mentioned that he needed to look at the background created by previous wars to understand what happened in the First World War. In this regard, Professor Salt wanted to understand the Ottoman Empire’s dire financial situation and how this affected the chain of events that led to its demise. His questions directed to the audience during the presentation such as "How does a government carry out crucial reforms without an adequate supply of money?" arguably let participants (re)think on the subject matter. In brief, Professor Salt emphasized that the war costs were also paid not only by soldiers or politicians but also by the Ottoman civilian population. He also demonstrated that all ethno-religious groups were guilty of violent acts. Finally, a general overview, taking in the Balkans, Anatolia, and the Arab provinces (as covered in the book as well), was presented in detail.

The lecture, having targeted both the Turkish and the Western audience concluded with a lively Q&A session.