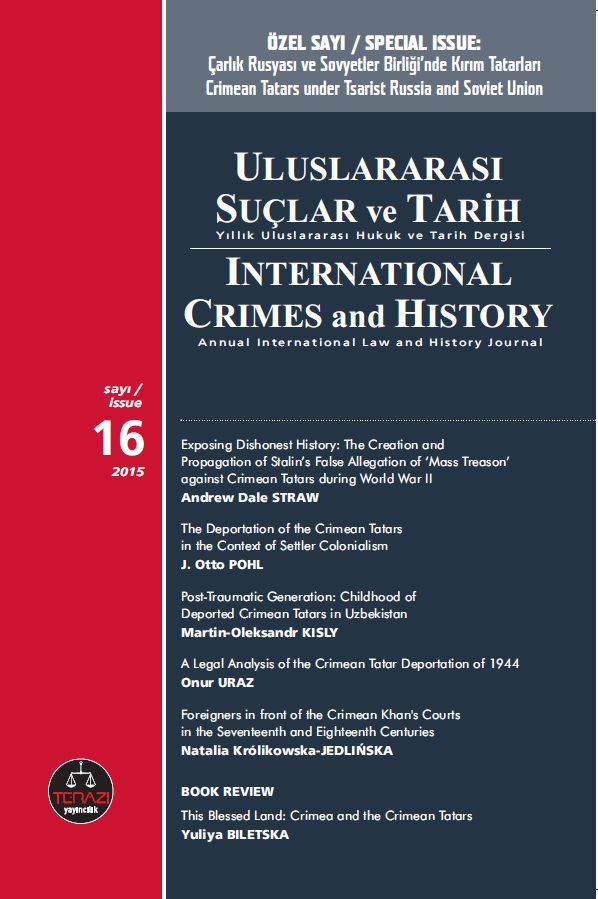 File: Population Movements in the Balkans and the Making of Borders, States, and Identities

International Crimes and History / Uluslararası Suçlar ve Tarih (ICH) is an annual bilingual (English and Turkish) peer-reviewed journal dedicated to the study of inter-communal, inter-ethnic, inter-religious, and international conflicts and crimes that took place in the past. For nine years of its publication, the ICH has been a platform for the scholarly investigation of conflicts and crimes that have occurred in the Balkans, the Caucasus, the Eurasia region, and the Middle East. The ICH is indexed in the Scientific and Technological Research Council of Turkey-Turkish Academic Network and Information Center (TUBİTAK-ULAKBİM) and EBSCO Host.

For more information visit the website of the ICH at:

The 17th Issue of the ICH: Population Movements in the Balkans and the Making of Borders, States, and Identities

The Balkans has been at the intersection of various migration routes throughout history; different peoples have left their footmarks on the Balkan soil throughout their journeys. These peoples uprooted, swallowed, or mixed with other groups, or they were assimilated by them in a process that eventually led to the emergence of new ethno-national and ethno-religious identities over time. Meanwhile, some of these peoples stayed in the Balkans and engaged in various types of interactions with indigenous peoples of the peninsula. As a result of these intense, centuries long, continuous, contingent, and casual interactions, the Balkans became one of the most ethnically diverse geographies in the world.

Population movements and interactions do not occur in a vacuum. They both affect and are affected by the socio-political context. Between the 15th and 19th centuries, population movements and interactions took place within the context of the imperial rules, particularly the rule of the Ottoman Empire. By the beginning of the 19th century, empires began to collapse, giving way to nation-states as new and novel political formations. Within a hundred years or so, the social, economic, and political landscape of the Balkans transformed dramatically. During this period, conflicts and clashes led to voluntary or forced migrations in various forms, which significantly transformed the ethno-demographic structure of the peninsula. During World War II and the following Cold War era, population movements were also witnessed albeit in smaller scales. The end of the Cold War was followed by merciless ethnic clashes that also resulted in changes in the ethno-demographic structure of the peninsula as a consequence of massacres, and voluntary or forced migrations. Today, the Balkans is a transit route of a huge migration wave from the Middle East (particularly from Syria), which renders it a stage for tragic scenes.

International Crimes and History (ICH) will dedicate its 17th issue to the topics related to population movements in the form of violent expulsions, flights, treaty-regulated migrations, population exchanges, and voluntary migrations in and through the Balkans in relation to changing socio-political contexts.

The following is an incomprehensive list of related historical episodes that are expected to be covered in this upcoming issue:

The ICH invites the contributors to focus on the below listed and other related questions while investigating the above mentioned historical episodes:

Contributions on the population movements in the Eurasian region and reviews of recently published books on the subject are also welcome.

Manuscripts submitted for publication are subject to peer review. The ICH accepts academic research that has not been previously submitted to another journal for publication. Submissions must be written in accordance with the standards put forward by the journal, and with a clear and concise language.

The ICH welcomes the submission of manuscripts as Main Articles and Book Reviews.

The editorial office will make every effort to deal with manuscript submissions as quickly as possible. All papers will be acknowledged on receipt by email