68TH ISSUE OF ERMENİ ARASTIRMALARI JOURNAL HAS BEEN PUBLISHED
Share : 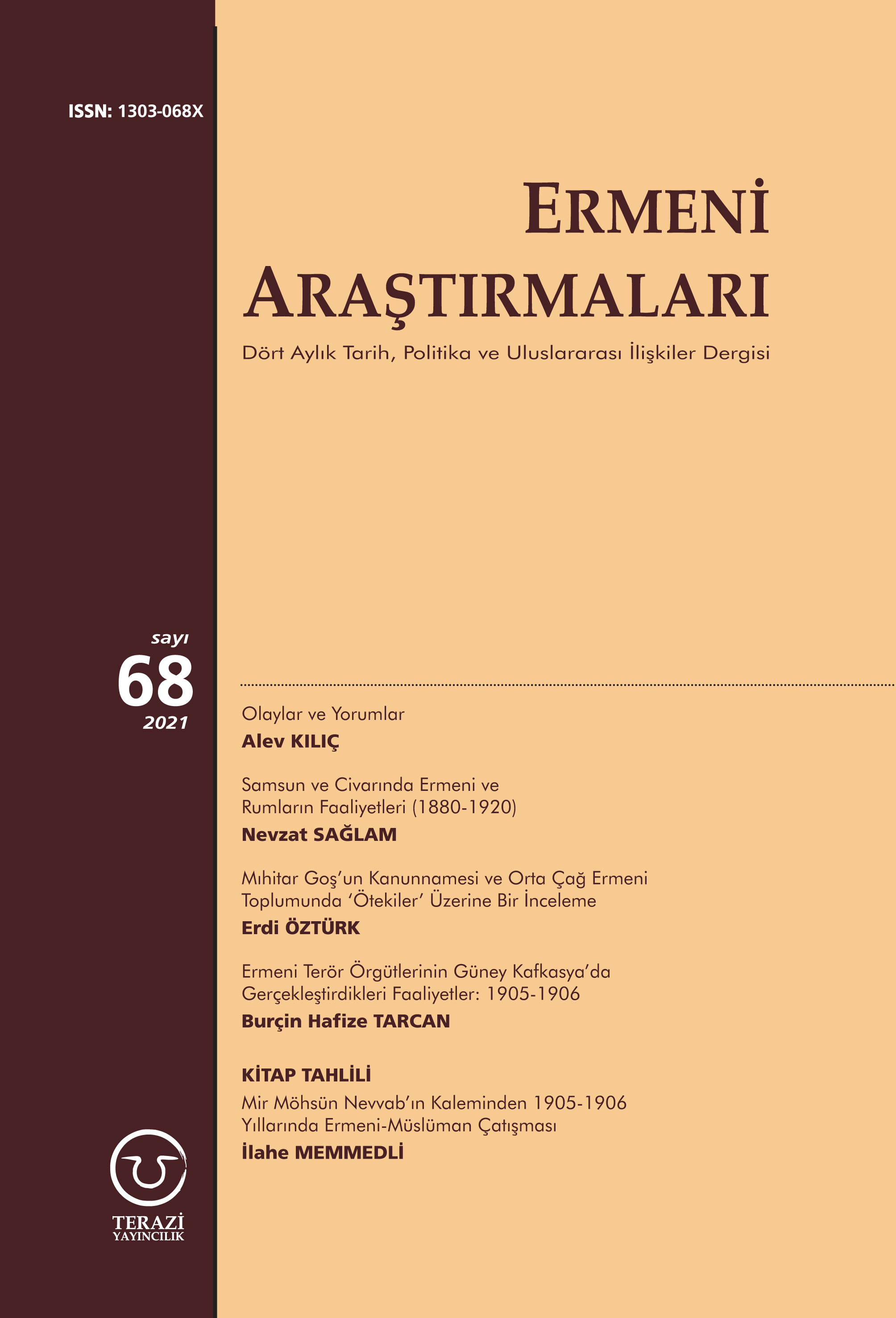 Our first issue in 2021, 68th issue has been published. This issue contains 1 editorial 3 research articles and 1 book review.

As always, the editorial written by Alev Kılıç titled “Olaylar ve Yorumlar” (Facts and Comments) covers Turkey-Armenia relations as well as domestic and international developments of Armenia in the period of December 2020 to April 2021. Kılıç highlights that the period under review has already been registered in the historical annals as one where the second independent Republic of Armenia (third according to Armenian sources, which also count the Soviet era republic), has waged a war, endured defeat and gone through serious internal havoc and instability. During these uncertain times, Armenia’s government has vacillated between adopting a realist and peaceful policy based on regional cooperation and a surrealist and revanchist one encouraged by the Diaspora, the Apostolic Church and Western Armenophiles. The defeat in the Karabakh War against Azerbaijan and its consequences have further increased its dependence on Russia, narrowing Armenia’s margin of double play between Russia and the West. Although the war and the following cease-fire agreement testified to the fact that Karabagh is part of the territory of Azerbaijan and that the question of status is confined solely to the question of what rights are be accorded to the Armenian minority living in Karabagh, Armenia has nevertheless continued in its contacts with the West to plea for sovereignty over Karabagh. The strategic dilemma and vacillation have kept on as well with regards relations with Turkey, as on the one hand, Turkey is seen as an enemy, while on the other hand, the search for regional cooperation and neighborly relations has gained prominence in the agenda.

The first article in 68th issue written by Nevzat Sağlam is titled “Samsun ve Civarında Ermeni ve Rumların Faaliyetleri (1880-1920)” (The Activities of Armenians and Greeks In and Around Samsun (1880-1920)). Sağlam evaluates the activities of Armenian bandits in and around Samsun province in the light of archive documents. Looking at the information Sağlam has revealed, it can be understood more easily in what frame the Ottoman State took the decision of the Relocation and Resettlement Law.

The second article in this issue written by Erdi Öztürk is titled “Mıhitar Goş’un Kanunnamesi Ve Orta Çağ Ermeni Toplumunda ‘Ötekiler’ Üzerine Bir İnceleme” (The Law Code by Mkhitar Gosh and Analysis on the “Others” in the Medieval Armenian Community). Öztürk sheds light on the life of the Armenian community in the medieval period based on the Law of Mkhitar Gosh, which has not been studied much in the literature.

The third research article titled Ermeni Terör Örgütlerinin Güney Kafkasyaʼda Gerçekleştirdikleri Faaliyetler: 1905 1906 (The Activities of Armenian Terrorist Organizations in the South Caucasus: 1905-1906) was written by Burçin Hafize Tarcan. Tarcan has tried to draw a general framework to the events that took place in the Caucasus between 1905-1906, with a comparative analysis, by giving place to the views of both Azerbaijani and Armenian writers in his work.