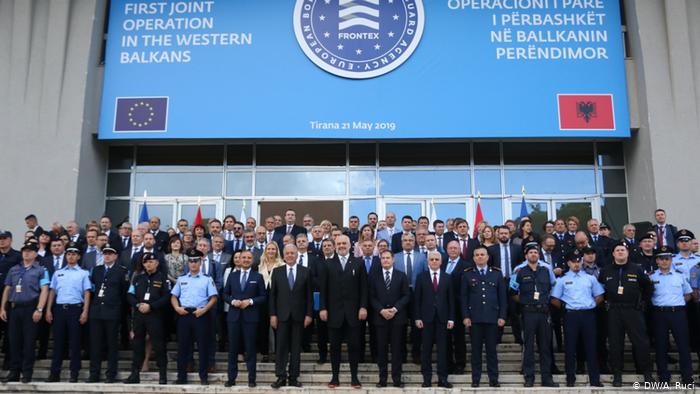 Albanian police will patrol "shoulder to shoulder" with border guards from across the EU on the country's frontier with Greece, Frontex Executive Director Fabrice Leggeri said on Tuesday.

The Albania deployment marks the first-ever joint operation on the territory of a neighboring non-European Union country for Frontex, which is the EU agency in charge of border protection and immigration. Led by an Albanian team leader, Frontex agents will work to halt illegal immigrants heading to western Europe across the Balkans.

"This is a real game changer and a truly historical step, bringing this region closer to the EU," he said at the event, which was hosted by Albanian Prime Minister Edi Rama.

Albania is eager to improve its ties with Brussels as it hopes to open EU membership talks next month. In turn, EU officials are interested in portraying a clear message on migration ahead of the EU elections. The migration crisis which peaked in 2015 and that year saw hundreds of thousands of people travel through the Balkans to seek asylum in western Europe boosted populist and anti-immigration parties across the bloc.

Frontex is sending 50 officers from 12 EU countries to Albania, together with 16 patrol cars and one van equipped with night vision equipment. The EU officers will also be empowered to fight human and drug trafficking and car theft.

There is no time limit on this mission, according to Leggeri.

The EU Commission has prepared similar accords with Bosnia, North Macedonia, Montenegro, and Serbia, which are set to go into effect soon. All of the countries are outside the EU and located on the so-called Balkan route used by migrants from Africa, Asia and the Middle East.

Frontex's deployment to Albania "strengthen the agency's ability to act in the EU's immediate neighborhood, while bringing that neighborhood closer to the EU," the EU Commission said in a statement.