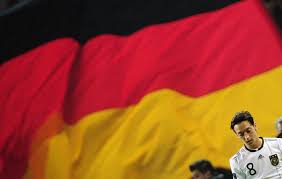 The statement, written in English, spell out his reasoning for quitting the German national team with plain intelligible language. Apart from the much-discussed subjects like his photograph with Turkish President Recep Tayyip Erdoğan, which Özil sincerely and dauntlessly explains based on his feelings and thoughts on his ancestral country Turkey, he very bravely hits the nail right on the head regarding the raising racism and racial-based discrimination in contemporary Germany. At this point, it should be underlined that his below words, in my opinion, eloquently explain the feelings of the vast majority of the Turkish-origin people who grew up in Germany and/or currently live in Germany as German citizens:

“Like many people, my ancestry traces back to more than one country. Whilst I grew up in Germany, my family background has its roots ﬁrmly based in Turkey. I have two hearts, one German and one Turkish. During my childhood, my mother taught me to always be respectful and to never forget where I came from, and these are still values that I think about to this day… my mother has never let me lose sight of my ancestry, heritage and family traditions.”[2]

Mesut Özil, while responding to criticisms directed against him, is stating that “They didn‘t criticize my performances. They didn’t criticize the team’s performances, they just criticized my Turkish ancestry and respect for my upbringing.” He draws attention to the double standards of German media and stresses that “Lothar Matthaus (an honorary German national team captain) met with another world leader a few days back, and received almost no media criticism. Despite his role with the DFB (German national team), they have not asked him to publicly explain his actions and he continues to represent the players of Germany without any reprimand.”[3] Özil then asks the following valid question: “Does my Turkish heritage make me a more worthy target?”[4]

His criticism against German Football Federation (DFB) focuses on “mistreatment.” His most quoted words, “I am German when we win, but I am an immigrant when we lose,” are followed by the following striking words which openly reveal the discriminatory treatment in the German society:

“…despite paying taxes in Germany, donating facilities to German schools and winning the World Cup with Germany in 2014, I am still not accepted into society. I am treated as being 'different'. I received the 'Bambi Award' in 2010 as an example of successful integration to German society, I received a 'Silver Laurel Leaf' in 2014 from the Federal Republic of Germany, and I was a ’German Football Ambassador’ in 2015. But clearly, I am not German... Are there criteria for being fully German that I do not ﬁt? My friend Lukas Podolski and Miroslav Klose are never referred to as German-Polish, so why am I German-Turkish? Is it because it is Turkey? Is it because I'm a Muslim? I think here lays an important issue. By being referred to as German-Turkish, it is already distinguishing people who have family from more than one country. I was born and educated in Germany, so why don't people accept that I am German?”[5]

Özil complains that discrimination is used as political propaganda and accuses those people who used his photograph with President Erdoğan against him with nurturing “previously hidden racist tendencies.” He ends his long statement with the maxim that “Racism should never, ever be accepted.”

These statements bring to light in a sensational way the phenomenon of latent racism and extreme xenophobia in Germany. It further reflects on today’s Western Europe. It is possible to assert that there is nothing new here and “racism in football is as old as the hills.”[6] For example, similar complaints of racism were voiced by another prominent international football player Zlatan Ibrahimovic concerning his treatment in Swedish media at the beginning of 2018. He was reported as saying that “Undercover racism exists, I am 100 percent sure. Because I am not Andersson or Svensson. If I would be that, trust me, they would defend me even if I would rob a bank. But they're not defending me in the way that they should."[7] He attributed this discriminatory treatment to his Bosnian and Croatian roots. We could duplicate these examples.

Both Germany and Sweden are countries with many past experiences of painful racist practices. Activities of white supremacist movements and eugenics practices, including sterilization, of Sweden in the not so distant past are still fresh in people’s minds.[8] As for Germany, the world still remembers with horror the Holocaust, nowadays augmented with its bloody colonial past in Namibia. As it was reminded by some scholars, “Based on the empirical evidence, the German masses seem to be no more - and no less - xenophobic than the French or the British. But, there was rampant anti-Semitism all over Europe in the 1920s and 1930s, and only the Germans opted for a 'final solution'. Given recent history, the Germans will have to endure closer scrutiny, they have to live with the fact that right-wing extremism there will always be more upsetting than elsewhere.”[9] This warning, from my perspective, is still valid today.

In this respect, it would be opportune to refer to the high-profile speech made by former US President Barrack Obama in South Africa during the 2018 Nelson Mandela Annual Lecture organized by the Nelson Mandela Foundation. The 2018 Lecture’s theme was “Renewing the Mandela Legacy and Promoting Active Citizenship in a Changing World.”

As it was stated in my article published recently in the Hürriyet Daily News, “Obama’s speech involved strong references to racial discrimination, colonialism, and white supremacism.” He stated that;

“most of Africa… was under colonial rule. The dominant European powers… viewed this continent and its people primarily as spoils in a contest for territory and abundant natural resources and cheap labor. And the inferiority of the black race, an indifference towards black culture and interests and aspirations, was a given… certain races, certain nations, certain groups were inherently superior, and that violence and coercion is the primary basis for governance…whatever laws may have existed on the books, whatever wonderful pronouncements existed in constitutions, whatever nice words were spoken during these last several decades at international conferences or in the halls of the United Nations, the previous structures of privilege and power and injustice and exploitation never completely went away… plain fact that racial discrimination still exists in both the United States and South Africa.”[10]

In my same article, it was also pointed out that;

“In astonishingly remarkable coincidence, at the very same date of the Obama’s speech, the international press reported the following statement by the Minister of Foreign Affairs of the Netherlands Stef Blok during a private meeting with Dutch people who work for international organizations; ‘give me an example of a multi-ethnic or multicultural society where the original population still lives (...) and where there is a peaceful society. I don't know of one’."

According to Minister Blok, every society has boundaries when it comes to taking in immigrants. He called it "very nice" to have a Turkish baker around the corner, but added that there can be some “side effects.” He also reportedly said that it is “genetically” determined that different groups of people cannot get along with each other. He was quoted as saying; "It's probably somewhere deep in our genes that we want to have a well-organized group to hunt with or to maintain a village with. And that we are not able to connect with people unknown to us." These words, as I underlined in the said article, are “a chilling reminder that racism is alive and thriving in the world.”

It should be mentioned that Mesut Özil’s statement, Obama’s speech, and the unfortunate remarks of Dutch Foreign Minister came into the agenda in a short span of time. They all reminded us that racism and racial discrimination in the world have not disappeared. They are still alive and kicking either in a latent form or by metamorphosing into a new formats like extreme xenophobia. Mesut Özil’s exclamation should be a wakeup call for Germany and beyond. It is not possible to cure social diseases such as racism by escaping from the realities of today or by sweeping the facts under the carpet. It is high time for Germany and Western Europe to face the obtrusive realities.