THE ARMENIAN NARRATIVE ABOUT THE RECENT ESCALATION IN THE SOUTH CAUCASUS AND THE NEW TACTIC FOR THE OLD STRATEGY
Commentary No : 2020 / 35
Turgut Kerem TUNCEL
14.10.2020
11 min read 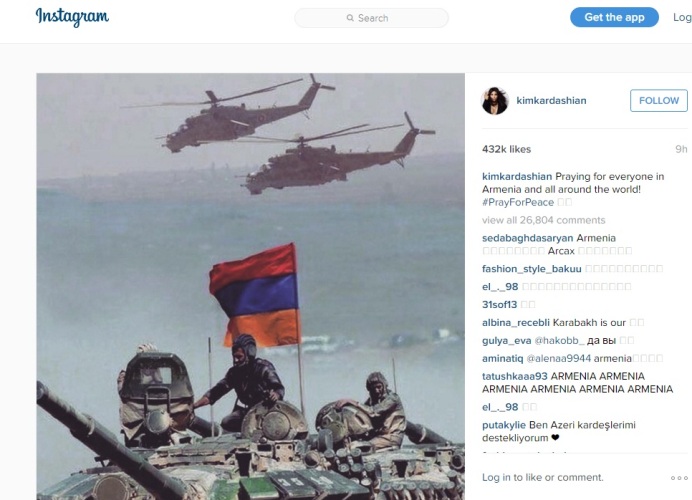 Fourteen days after the outbreak of large-scale clashes between Armenia and Azerbaijan over the occupied territories of the latter composed of Nagorno-Karabakh and the adjacent regions, a ceasefire was signed in Moscow in the night connecting 9 October to 10 October. Although the ceasefire was to take effect by noon of 10 October, both during the ceasefire negotiations, which lasted for more than ten hours, and after the signing of the agreement, clashes and shelling of cities and towns continued. In the night of 10 October, the Armenian side shelled Azerbaijan’s second largest city of Ganja causing huge damage and loss of civilian lives.  It is reported that clashes all along the contact line continue. As such, the ceasefire did not really result in the cessation of the military operations. For now, tranquility in the region is not in sight.

While military operations continue in different intensities, the two sides simultaneously keep producing new propaganda discourses. As a matter of fact, the battles continue not only at the military front but also at the propaganda sphere. The Armenian side seems to be more active and creative in that domain. It could be seen that in an interval as short as about eighteen days, the Armenian side has produced several propaganda discourses addressing particularly the Western audience. Examining these discourses, it can be seen that they have been fashioned in a way to construct a specific narrative about the recent clashes. This narrative hints at the prospective tactics and activities of the Armenian side in the political-diplomatic sphere.

The Making of the Armenian Narrative about the Recent Clashes

The Armenian narrative has been constructed by adding on successive claims. From the very beginning of the clashes, Armenia began propagating that it was not Azerbaijan, but Turkey that initiated the hostilities. In fact, from the beginning, Armenia has tried to portray the escalation as a military aggression of Turkey on Armenia and the Armenians. As such, the Armenian side seeks to portray Azerbaijan as the junior partner of Turkey.

Framing the onset of clashes as such serves several purposes. First, it helps to portray the Armenian side as the target of the aggression of a much stronger adversary. This helps Armenia to represent itself a as a victim. Second, this portrayal is used to liken the current situation of Armenia with that of the biblical figure of David standing against Goliath, attributing Armenia the traits of courage, humility, faith, and other virtues. Third, emphasis on the ‘Turkish factor’ helps to represent the recent clashes as an illegitimate and unnecessary attack on ‘peaceful Armenia.’ As such, Armenia portrays itself as merely a defensive actor harassed by a bigger outside force. This representation is serviceable to mask the responsibilities of Armenia in the perpetuation of the Karabakh conflict and the outbreak of the clashes. Fourth, emphasizing the ‘Turkish factor’ sets the grounds for the allegation of the ‘genocidal intentions’ of the adversary, an allegation that was put into circulation shortly afterwards. All these elements are expected to bring sympathy to the Armenian side.

An important element of the claim of the ‘Turkish factor’ is the alleged deployment of the foreign jihadists to Azerbaijan by Turkey just before and after the outbreak of the clashes. This allegation is used as a proof of the ‘Turkish factor’ in the recent escalation. Yet, the same allegation has another function, as well. It is also used to implicitly portray the hostilities as a clash between Islam and Christianity. Within this framework, it is noteworthy that the Armenian media and social media have been animated by the partial destruction of the Ghazanchetsots Cathedral in Shusha, the city that is regarded as the cultural capital of Azerbaijan that remains under the Armenian occupation since May 1992, as a result of the alleged Azerbaijani air raid in Karabakh on 8 October.

As stated earlier, shortly after the outbreak of the clashes, the ‘genocide discourse’ was brought forward. For example, the Armenian President Armen Sarkissian in a speech on 28 September stated the following:

For every Armenian living worldwide that’s sort of a return of the ghost. Why I say ghost, because that’s the ghost of the Ottoman Empire, that 105 years ago masterminded the Armenian Genocide. There’s no way that we can allow that this genocide happen again.”[1]

Sarkissian’s speech was indeed a signal flare. Following this statement, ‘genocidal intentions’ of the Azerbaijanis and the Turks got more and more accentuated and became one of the main themes of the Armenian media and social media. This even led to hyperbolic claims asserting that the objective of the Azerbaijani/Turkish side is neither ‘land grab’ nor Karabakh but ‘finishing off’ the Armenians. One of the statements of the Armenian Prime Minister Nikol Pashinyan on 3 October was probably the vertex of this absurdity. That day, he stated the following:

Although absurd, this fiction serves several functions. By this way, the Armenian side adds a historical dimension to the Karabakh conflict, in general, and the recent clashes, in specific. Besides, and probably more importantly, this claim is used to distort the historical facts about the emergence of the Karabakh conflict in order to distract the attention of the international community from the real causes and the fair and lawful solution of the conflict by attributing it an entirely different character. Thirdly, by utilizing the discourse of genocide, Armenian side hopes to gain moral superiority, and the sympathy and support of the international public opinion. In addition, this subterfuge helps to hide away the fact that the occupation of the Azerbaijani territories between 1991 and 1994 was accompanied by the ethnic cleansing of the Azerbaijanis from these lands. As such, it provides the Armenian side with the possibility of overshadowing the Azerbaijani arguments about the humanitarian consequences of the occupation, which is, anyways, often neglected by the international community.

It was probably not a coincidence that on 1 October, the ‘National Assembly’ of the de facto Armenian entity in Karabakh issued an appeal titled “Appeal of the Artsakh [Nagorno Karabakh] National Assembly to ethnic minorities of Azerbaijan.” Besides other things, this appeal alleged that one of the state policies of Azerbaijan was the cultural and physical elimination of its ‘ethnic minorities.’ Simultaneously, Armenian media and social media began circulating similar allegations.[3]

In the meantime, #StopAliyev and #StopErdogan hashtags have popped up in the Armenian social media. Under these hashtags, posts portraying the conflict as a clash between democracy and human rights represented by the Armenian side and autocracy and dictatorship represented by the Azerbaijani/Turkish side were begun to be dispersed. It can be seen that, by this way, the Armenian side aims to identify itself as the guardian of the ‘Western/European values’ as opposed to the ‘barbaric Turk’ assaulting all that the West/Europe represents.

Strikingly, Pashinyan once again took the lead of hyperbolism. During an interview with France 24 on 2 October Pashinyan did not shy away from making the following outlandish claim:

On 3 October, Pashinyan, this time to German daily Bild, referring to the first and the second battles/sieges of Vienna of the Ottomans in 1529 and 1683 stated “…Nagorno-Karabakh and Armenia are at the forefront of civilization today. If the international community fails to consider the situation accurately, Europe will have to see Turkey in Vienna.”[5]

It is clear that what the propagandists at the Armenian side are trying to do is to capitalize on the thorny relations between Ankara and some Western capitals, as well as the Turcophobic sentiments empowered by Islamophobia in Europe. Besides that, it can also be seen that they also try to frame the conflict within the framework of the construct of ‘clash of civilizations.’ In both ways, Armenian demagogues address mainly the right-wing, conservative, xenophobic Western public by employing an essentially racist framework.

As said, a ceasefire took effect by noon of 10 October, though it did not hold. From that day onwards, Azerbaijan’s ‘unilateral violations’ of the ‘humanitarian ceasefire’ became a trendy topic in the Armenian media and social media. This was coupled with the discourse of the ‘war crimes of Azerbaijan.’

Overall, the Armenian narrative on the recent clashes constructed through allegations and statements of the Armenian officials, de facto authorities, media and social media, narrates the military insult of the ‘terrible, genocidal, Muslim Azerbaijanis/Turks’ on the ‘peaceful, Western, Christian Armenians’ to finish the unfinished business of 1915. It also puts forth that the Armenians are not only defending themselves but also the ‘Western civilization’ against the Azerbaijani/Turkish barbarity, tyranny and all that stands against Western/European values.

In fact, this narrative, which is still in the making, is by no means original, let alone unanticipated. It is the habitual Armenian narrative adjusted to the new context. Yet, this narrative deserves attention because there are noticeable signs as to for what purpose this narrative has been constructed.

As a matter of fact, it would not be surprising if this narrative and the push for the recognition find some positive reception in Western public opinion, particularly among the reactionary, racist/nationalist, xenophobic sections and political forces. In fact, such reactionary, racist/nationalist, xenophobic intellectual and political climate prevalent in the West has been one of the hindrances against the lawful resolution of the Karabakh conflict as it diverts the West from taking an impartial stance vis-à-vis the Karabakh conflict in line with the basic principles of the international law. Needless to say, refusing impartial and rational thinking and avoiding international law is one of the reasons why today we are talking about the demise of the liberal international order that the West had struggled for so long and so much to establish.

[3] For an assesment of  this appeal see, Turgut Kerem Tuncel, “The Insight into the Appeal of the de facto Authorities in Karabakh to the ‘Ethnic Minorities’ of Azerbaijan,” AVİM,  October 05, 2020, access October 14, 2020, https://avim.org.tr/en/Yorum/THE-INSIGHT-INTO-THE-APPEAL-OF-THE-DE-FACTO-AUTHORITIES-IN-KARABAKH-TO-THE-ETHNIC-MINORITIES-OF-AZERBAIJAN-1.

[5] “’If the international community fails to consider the situation accurately, Europe will have to see Turkey in to Vienna’-PM's interview to BILD,” The Prime Minister of the Republic of Armenia, October 04, 2020, access October 14, 2020, https://www.primeminister.am/en/interviews-and-press-conferences/item/2020/10/04/Nikol-Pashinyan-interview-Bild/.