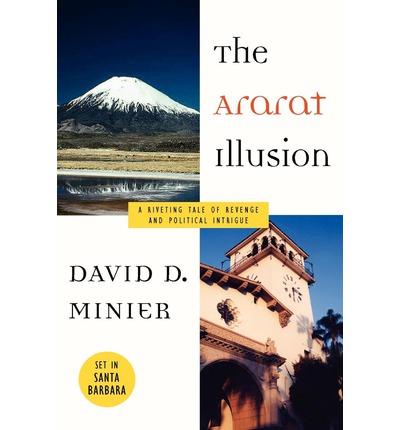 The attacks carried out during the third wave of Armenian terrorism[1] has inflicted great harm and suffering to Turkish diplomacy. These terrorism activities were shocking not only for Turkey and the Turks, but also for the world’s public opinion. So much so that, foreigners who have been affected by the attacks against Turkish diplomats felt necessity to write books to share their observations. One of these books is The Ararat Illusion, a book authored by David D. Minier and published by Signo Editions in 2011. David D. Minier is the prosecutor of the Gourgen Yanikian case, involving Yanikian’s murder of two Turkish diplomats. In the first pages of the novel, the trap set in in 1973 against Turkish diplomats in Santa Barbara, Los Angeles is described in detail. The author begins his novel by explaining that this attack, which left traumatic effects on him. This novel, based on historical research and document, is noteworthy for its gripping narrative.

The murder plot of the two Turkish diplomats in the novel has been detailed in attention-grabbing manner. As the second part starts, the time-frame shifts to 1986. The novel has been written by using historical information. In the novel, there is an emphasis on “the recurring history" and it is indicated that the Armenians who organized terrorist activities in history followed in the footsteps of Andranik. Minier also emphasizes that people with such a mindset would never allow their extreme causes to be forgotten. Minier describes this obsession as "the Ararat Illusion".[2] Following the serial murders perpetrated by the "Andranik Pasha" organization, which adopted Andranik’s name and the idea of resuming  violence from where there racist Armenian terrorist had left off, the novel’s protagonist Detective Michael Page reveals that the terrorist organization carries out its violence to influence American authorities. The Andranik Organization declares that they would kill an American official each week until the United States accept its requests, which are;[3]“We demand the United States immediately do the following:

“We demand the United States immediately do the following:

In addition to the above-mentioned demands of Armenian terrorists, who were inspired by the historical developments, it was noted that the purpose of the Harbord Report, ordered to be prepared to establish an independent Armenian state in the east of Anatolia by the request of the United States President Woodrow Wilson at the end of the WWI, was to provide accurate and sufficient information for the US President. Likewise, as expressed in the novel, the borders of Armenia as foreseen by the US President Wilson were aimed to be used against both Russia and the Ottoman Empire. This points to the aim of an American mandate within the borders of the Ottoman Empire, covering the provinces which Armenians are living in. In other words, it seems that an American mandate covering all Ottoman territories was not targeted. This issue has also been studied in an academic work.[4]

In the rest of the novel, the scale of the serial killings of terrorist Kalik, who founded the Andranik Organization with the enthusiasm derived from the racist Armenian terrorist Andranik, gradually increses and results with an attack against the US President Ronald Reagan. Later on, it turs out that the Andranik Organization was formed by KGB agents. Fortunately, these planned assassinations are prevented. In the novel, it is explained that one of the main purposes of Andranik Organization organized by Russia via its KGB agents was to damage US and Turkey relations and to ensure Turkey’s withdrawal from NATO.

This novel offers the reader the first instance of the third wave Armenian terrorism against Turkey in a gripping manner. Racist and extremist-minded Armenian groups have always aimed to impose their so-called genocide rhetoric against Turkey by affecting influential third-party countries. This novel is remarkable that it shows how the above-mentioned obsessive mindset can influence the way people behave. It is clear in this book that Armenian groups with racist and extremist views attempt to impose their own obsessions on others by resorting terrorism.

Another interesting point about this book is that it is almost no longer possible to buy this book. The probable cause of this is that Armenians have used various means to prevent the sale of this book. This is a method that is constantly used by Armenian groups who have turned the genocide allegations into an obsession. The Ararat Illusion is one of the novels classified as “denialist” by the Armenians and stands against the Armenian allegations.

Meanwhile, Gourgen Yanikian, the murderer of the two Turkish diplomats who was tried in the case where the author David D. Minier served as the prosecutor, passed away in a home for the elderly in 1984. Yanikyan was released with the consent of the Governor of California at that time. In the novel, it is indicated that the governor who approved his release was the Armenian-origin George Deukmejian.[5] Prosecutor Minier had underlined this information in the newspaper Armenian Action in February 1985.[6] Prosecutor Minier's article begins with the words by Gourgen Yanikian, who stated as he was confessing to  the crime; "I will be the first one as an example to many more to follow.”[7]

The name of Tehlirian,[8] one of the members of the Andranik Organization[9] like Yanikian,[10] was given to a square in Marseilles in 2017. Tehlirian’s membership in the Andranik Organization was mentioned in the news articles concerning the naming of the square in Marseilles. The continued heroization of racist and obsessive terrorists as is an unfortunate indication of how public opinion has become blinded by the so-called heroic sagas of Armenian terrorist groups.