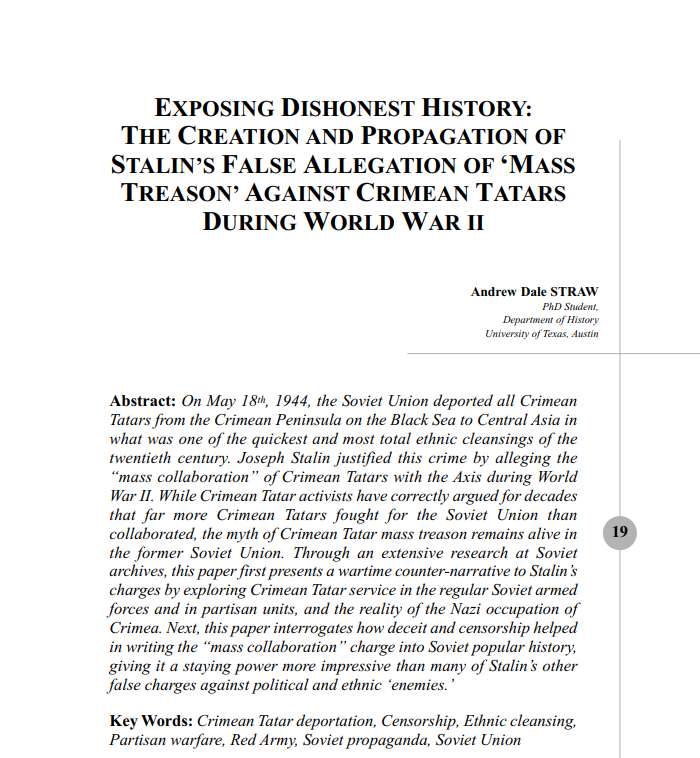 On May 18th, 1944, the Soviet Union deported all Crimean Tatars from the Crimean Peninsula on the Black Sea to Central Asia in what was one of the quickest and most total ethnic cleansings of the twentieth century. Joseph Stalin justified this crime by alleging the “mass collaboration” of Crimean Tatars with the Axis during World War II. While Crimean Tatar activists have correctly argued for decades that far more Crimean Tatars fought for the Soviet Union than collaborated, the myth of Crimean Tatar mass treason remains alive in the former Soviet Union. Through an extensive research at Soviet archives, this paper first presents a wartime counter-narrative to Stalin’s charges by exploring Crimean Tatar service in the regular Soviet armed forces and in partisan units, and the reality of the Nazi occupation of Crimea. Next, this paper interrogates how deceit and censorship helped in writing the “mass collaboration” charge into Soviet popular history, giving it a staying power more impressive than many of Stalin’s other false charges against political and ethnic ‘enemies.’