ARTICLE TITLED: “THE CHALLENGES TO FRENCH COLONIAL RULE IN TUNISIA: REALPOLITIK IN THE MEDITERRANEAN"
Share : 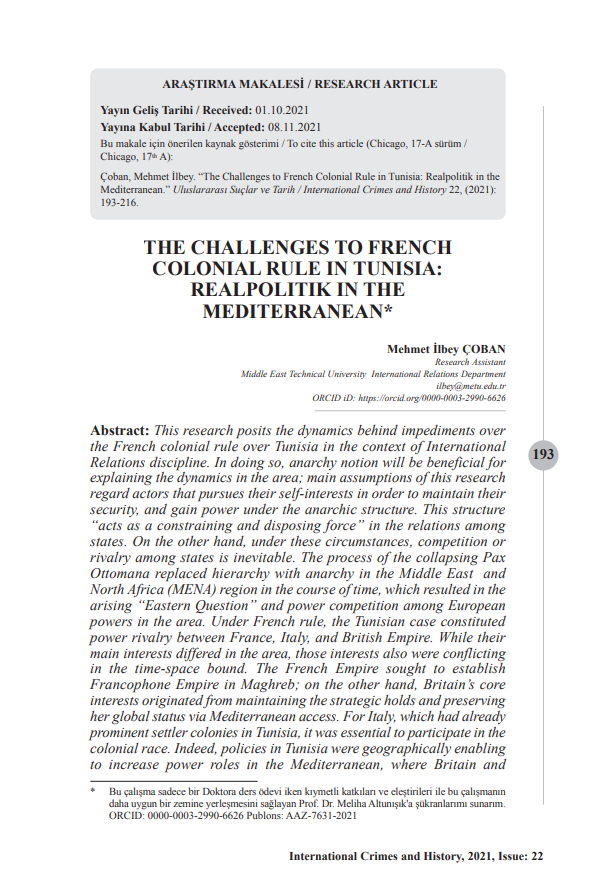 This research posits the dynamics behind impediments over the French colonial rule over Tunisia in the context of International Relations discipline. In doing so, anarchy notion will be beneficial for explaining the dynamics in the area; main assumptions of this research regard actors that pursues their self-interests in order to maintain their security, and gain power under the anarchic structure. This structure “acts as a constraining and disposing force” in the relations among states. On the other hand, under these circumstances, competition or rivalry among states is inevitable. The process of the collapsing Pax Ottomana replaced hierarchy with anarchy in the Middle East and North Africa (MENA) region in the course of time, which resulted in the arising “Eastern Question” and power competition among European powers in the area. Under French rule, the Tunisian case constituted power rivalry between France, Italy, and British Empire. While their main interests differed in the area, those interests also were conflicting in the time-space bound. The French Empire sought to establish Francophone Empire in Maghreb; on the other hand, Britain’s core interests originated from maintaining the strategic holds and preserving her global status via Mediterranean access. For Italy, which had already prominent settler colonies in Tunisia, it was essential to participate in the colonial race. Indeed, policies in Tunisia were geographically enabling to increase power roles in the Mediterranean, where Britain and especially Italy prevented France from gaining dominant power in the area by benefiting from their subjects there. Especially prominent existence of the Italian settlers and acknowledgment of their national identity by France in 1896 brought forth more challenges to French rule in which was soon troubled by Tunisian nationalism as well.