THE INTERNATIONAL CONFERENCE TITLED “THE CENTENNIAL OF THE INDEPENDENCE OF THE THREE SOUTH CAUCASUS STATES: HISTORICAL BACKGROUND, CONTEMPORARY DEVELOPMENTS AND PROSPECTS OF PEACE AND PROSPERITY” WAS HELD ON 9 NOVEMBER 2018 IN ANKARA
Share : 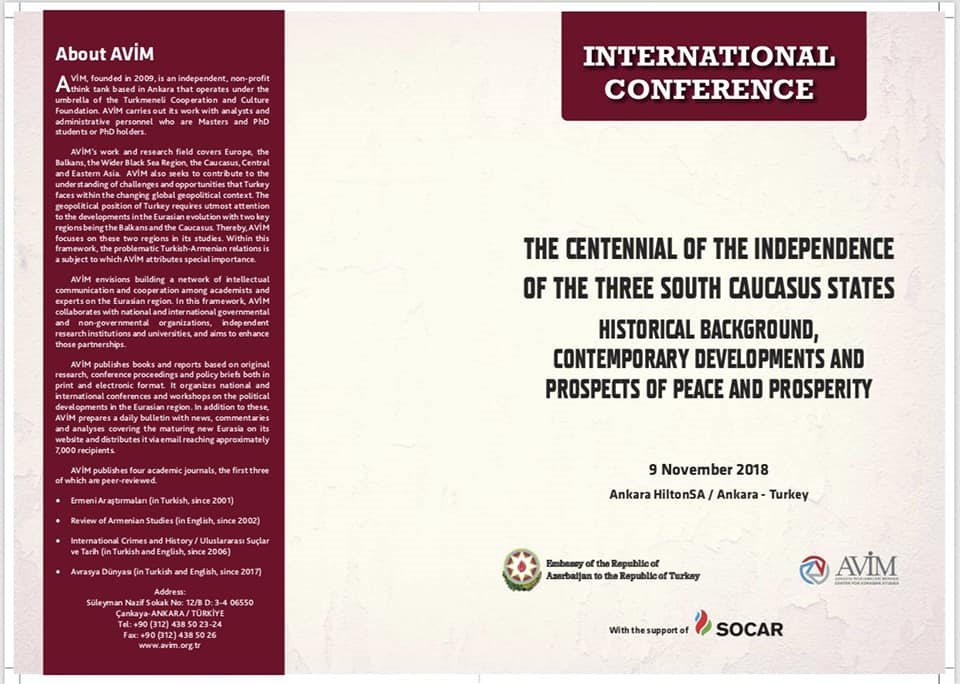 The international conference titled “The Centennial of the Independence of the Three South Caucasus States: Historical Background, Contemporary Developments and Prospects of Peace and Prosperity” jointly organized by AVİM and the Embassy of the Republic of Azerbaijan with the support of SOCAR was held on 9 November 2018 in Ankara.

The conference participated by researchers and former diplomats from Turkey, Azerbaijan, US, Russia, Britain was composed of three panels. Following the opening remarks made by the Ambassador of Republic of Azerbaijan to Turkey, H.E. Hazar İbrahim and the AVİM Director Ambassador (R) Alev Kılıç, in the first panel titled “South Caucasus from the early 20th Century up to the Present” the panelists dealt with the historical background of the coming into existence and the loss of the first independence of the three South Caucasus states during the First World War era. The focus of the second panel titled “Perspectives on the Conflicts in the South Caucasus” was the views of the US, EU, Russia and Turkey on the conflicts and their resolutions. Panelists from the US, Britain, Russia and Turkey discussed the approaches of these four actors to the South Caucasus and the protracted conflicts in the region. In the third panel titled “Contemporary Political, Humanitarian and Legal Scenery in the South Caucasus and Conflict Resolution Initiatives” the panelists from Turkey, US and Azerbaijan reflected on the humanitarian and legal aspects of the conflicts in the region and shared their views with respect to the resolution of them.

The conference was concluded with by the closing remarks of AVİM Advisor Ambassador (R) Yiğit Alpogan.