THE 40TH ISSUE OF THE REVIEW OF ARMENIAN STUDIES JOURNAL HAS BEEN PUBLISHED
Share : 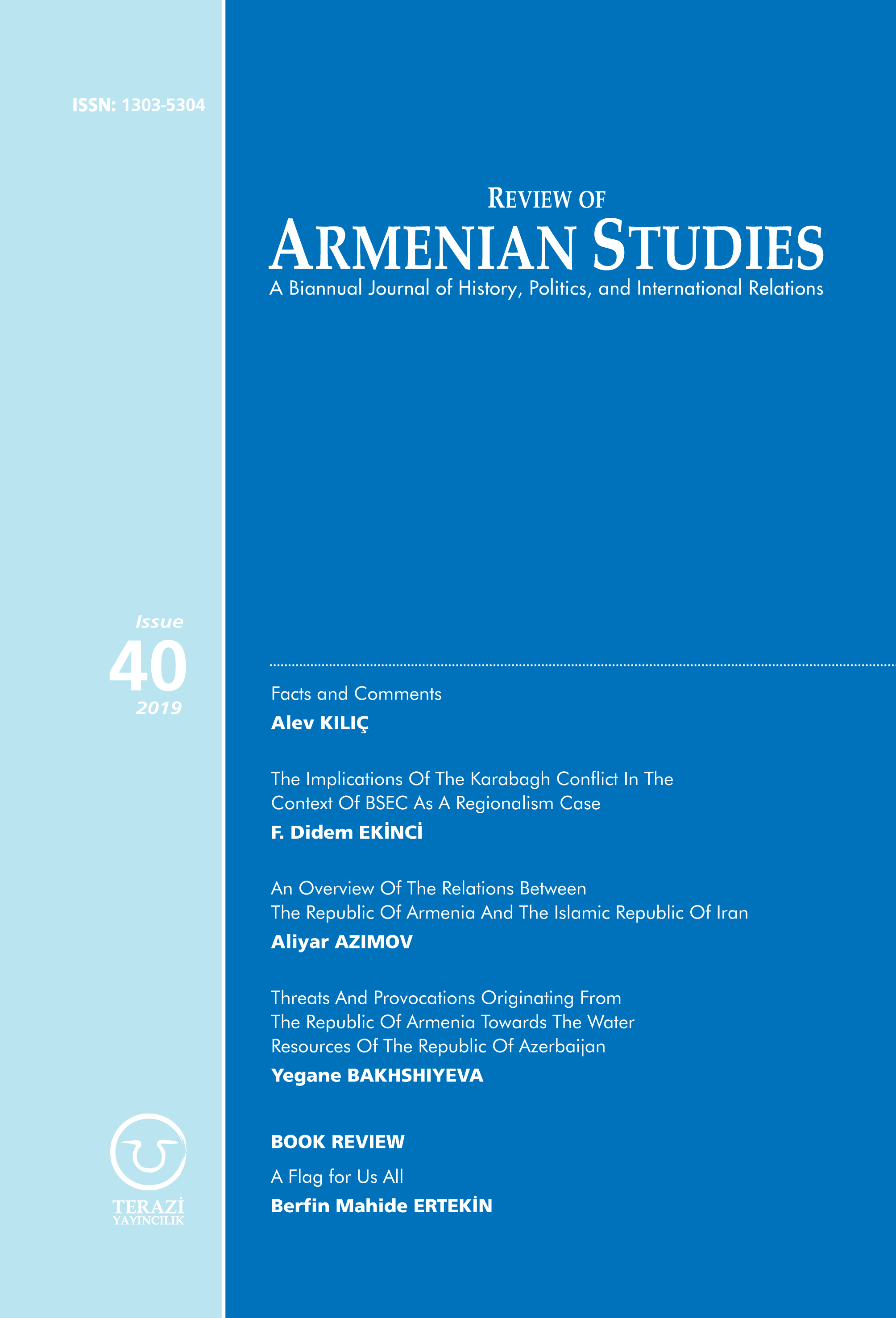 The first article in the 40th issue, titled “Facts and Comments” and authored by Alev Kılıç, covers Turkey-Armenia relations as well as the domestic and international developments of Armenia in the period of August to December 2019. During this period, internal problems of the government increased significantly, and domestic opposition assumed a stronger and more organized character. The Armenian government’s indecisive and conflicting statements have further strengthened the international opinion that Armenia is the obstacle to a peaceful resolution. These developments have led the government under Prime Minister Nikol Pashinyan to open Armenia to international contacts and to introduce foreign relations as evidence of Armenia’s success. At the same time, the Government has undertaken a mission to gather all the Armenians around the World within a concept of Pan-Armenianism. Lastly, the ever-present negative attitude and accusations against Turkey have further sharpened under these circumstances.

In her article titled “The Implications Of The Karabagh Conflict In The Context Of BSEC As A Regionalism Case”, F. Didem Ekinci inquires the impact and the implications of the Karabagh conflict in the Black Sea Economic Cooperation (BSEC) context through the conceptualization of regionalism. To lay the groundwork for her article, she provides an account on the concepts of region and regionalism and information on the birth, the evolution, and the stagnation of the BSEC. Ekinci argues that the Karabagh conflict stands as a major reason for why BSEC has failed to progress as a regional cooperation and stability project as originally envisioned.

In his article titled “An Overview Of The Relations Between The Republic Of Armenia And The Islamic Republic Of Iran”, Aliyar Azimov analyzes the parameters of the relations between Armenia and Iran and what motivates both parties in their approach towards each other. Azimov indicates that the geopolitical scene of the South Caucasus changed by the dissolution of the USSR, and new opportunities and challenges emerged for both Armenia and Iran. He argues that, to become a regional power, Iran has been interested in cooperation with Armenia to strengthen its position in the South Caucasus. Armenia, meanwhile, has tried to get the support of Iran along with Russia to maintain its political presence in the region and maintain access to the outside world.

In her article titled “Threats And Provocations Originating From The Republic Of Armenia Towards The Water Resources Of The Republic Of Azerbaijan”, Yegane Bakhshiyeva seeks to assess the magnitude of the damage caused to Azerbaijan’s water resources by the activities of Armenia both within its borders and the occupied territories of Azerbaijan that Armenia exercise direct control over. Bakhshiyeva argues that due to gross negligence, incompetence, lack of inspection, or their combination, Armenia is engaged in grave ecological irresponsibility that is constantly victimizing Azerbaijan. This means that Azerbaijan’s rivers, which form the sources of drinking water for the country, are being constantly polluted by various wastes that is having serious impact on the ecology of Azerbaijan. Furthermore, the ongoing occupation of Karabakh and adjacent rayons means that Azerbaijan is unable to inspect, repair, and utilize some of its important water-related facilities that would normally supply it with irrigation waters, electricity, and tourism money.

Lastly, Berfin Mahide Ertekin analyzes the book titled Hepimize Bir Bayrak (A Flag For Us All) by Torkom Istepanyan. Ertekin highlights the importance of the book by drawing attention to the fact that it constitutes a heartfelt effort by a Turkish Armenian to draw attention to the past and present brotherly relations between the Turkish-Muslim and non-Muslim Armenian, Greek and Jewish citizens of Turkey and their will work together for the betterment of the country. The book is also of critical value in that it contains Istepanyan’s positive memoirs and recollections about the events that transpired during the enactment of the Relocation and Resettlement Law of 1915.