THE 39TH ISSUE OF THE REVIEW OF ARMENIAN STUDIES JOURNAL HAS BEEN PUBLISHED
Share : 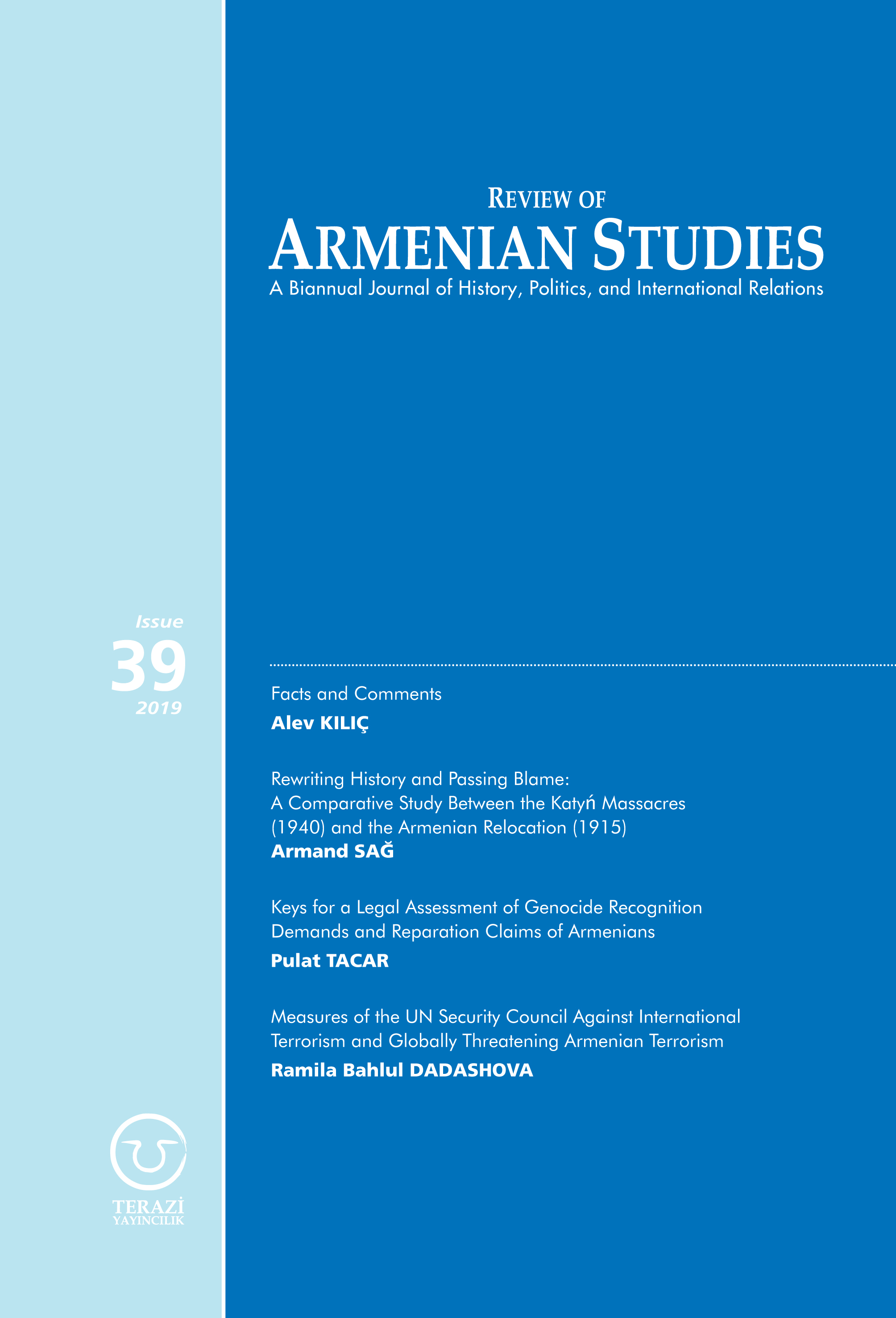 The first article in the 38th issue, titled “Facts and Comments” and authored by Alev Kılıç, covers Turkey-Armenia relations as well as domestic and international developments concerning Armenia between January-July 2019. During this period, Nikol Pashinyan secured his position as the Prime Minister of Armenia following a solid electoral victory. Following his victory, he appointed his cabinet and reduced the number of ministries. His push to have the Ministry of Diaspora abolished and its functions to be absorbed by the Prime Ministry received considerable criticism from the Diaspora. However, he nevertheless went through with the decision. The arrest and trial of the former President Robert Kocharian developed into a power struggle between Pashinyan and Kocharian and their supporters. In foreign relations, Armenia attempted to walk a tight rope between Russia and its Western partners. The Armenian government, despite its overall reformist agenda, has placed the blame on Turkey for the lack of bilateral relations based on cliché arguments and has claimed it has no preconditions. As such, on the issue of Turkey-Armenia relations, the Pashinyan government has so far behaved very similarly to previous Armenian governments.

In his article titled “Rewriting History And Passing Blame: A Comparative Study Between The Katyń Massacres (1940) And The Armenian Relocation (1915)”, Armand Sağ makes a comparative case study between the Katyń massacres (1940) in Poland and the Armenian relocation (1915) in the Ottoman Empire. Sağ determines similarities between the way the Soviet Union used the Katyń massacres and militant nationalist Armenians use the events surrounding the Armenian relocation to carry out a nation-building process that covers up their misdeeds and atrocities and pass blame to their designated enemies. In this way, both the Soviet Union and militant nationalist Armenians engaged in a rewriting of history by coming up with “alternative” versions of past events that suited their interests. Sağ indicates that while the Soviet Union collapsed and thus its systemic cover-up of Katyń came to an end, militant nationalist Armenian groups and Armenia continue to distort the facts surrounding the Armenian relocation to carry out their bellicose nation-building process that designates Turks as enemies.

In his article titled “Keys For A Legal Assessment Of Genocide Recognition Demands And Reparation Claims of Armenians”, Pulat Tacar makes a comprehensive assessment of the legal ramifications of the Armenian genocide claims and the related compensation demands. The author indicates that genocide claims are based on confusing arguments that use current legal concepts and rules to qualify century-old events as genocide and ignore the legal criteria on how genocide should be determined. Simply put, the genocide claims simply do not hold up to the standards of the 1948 UN Genocide Convention. Tacar indicates that, to remedy this legal weakness, groups who maintain the claims of genocide seek to use alternative methods, such as pointing to non-binding law instruments or draft treaties which, in the end, end up failing to service their goals. Similarly, the author highlights that compensation demands related to the claims of genocide rest on weak legal grounds. Despite the Turkish side having the clear upper hand in the legal aspects of genocide issue, Tacar warns that the Turkish government, academia, and NGOs should make the effort to more effectively explain to third parties why they reject the Armenian genocide claims and associated compensation demands.

In her article titled “Measures Of The UN Security Council Against International Terrorism And Globally Threatening Armenian Terrorism”, Ramila Bahlul Dadashova lists several conventions, decisions, and resolutions adopted at the level of the United Nations to draw up a general framework for how the international community approaches terrorism. The author also uses the writings of several authors to give the reader a general understanding of what “terrorism” means. As known, there is no international consensus on the meaning of terrorism, which complicates international efforts to combat it. Using the international and definitional framework of the concept of terrorism, Dadashova argues that Armenia and militant groups associated with Armenia have resorted to actions that can be classified as terrorism. The author indicates that Armenia has so far not been reprimanded by the international community for employing terrorism as a state policy, which has had tragic consequences for Turkey and Azerbaijani Turks throughout modern history.

Aware of the progress of the digital age and in an attempt to be able to adapt to the new advance brought by this new age, the Center for Eurasian Studies (AVİM) has decided to publish all AVİM publications online for open access with the aim of reaching out to a broader audience.

In this context, AVİM’s peer-reviewed journal Review of Armenian Studies, which is indexed in several databases including TR Dizin and EBSCO Host, will be available for open access through AVİM’s website and DergiPark.

For the archives of AVİM journals and other publications accessible online, please visit: www.avim.org.tr

If you wish to subscribe to the journal or buy the new issue, please contact: http://[email protected]