THE 38TH ISSUE OF THE REVIEW OF ARMENIAN STUDIES JOURNAL HAS BEEN PUBLISHED
Share : 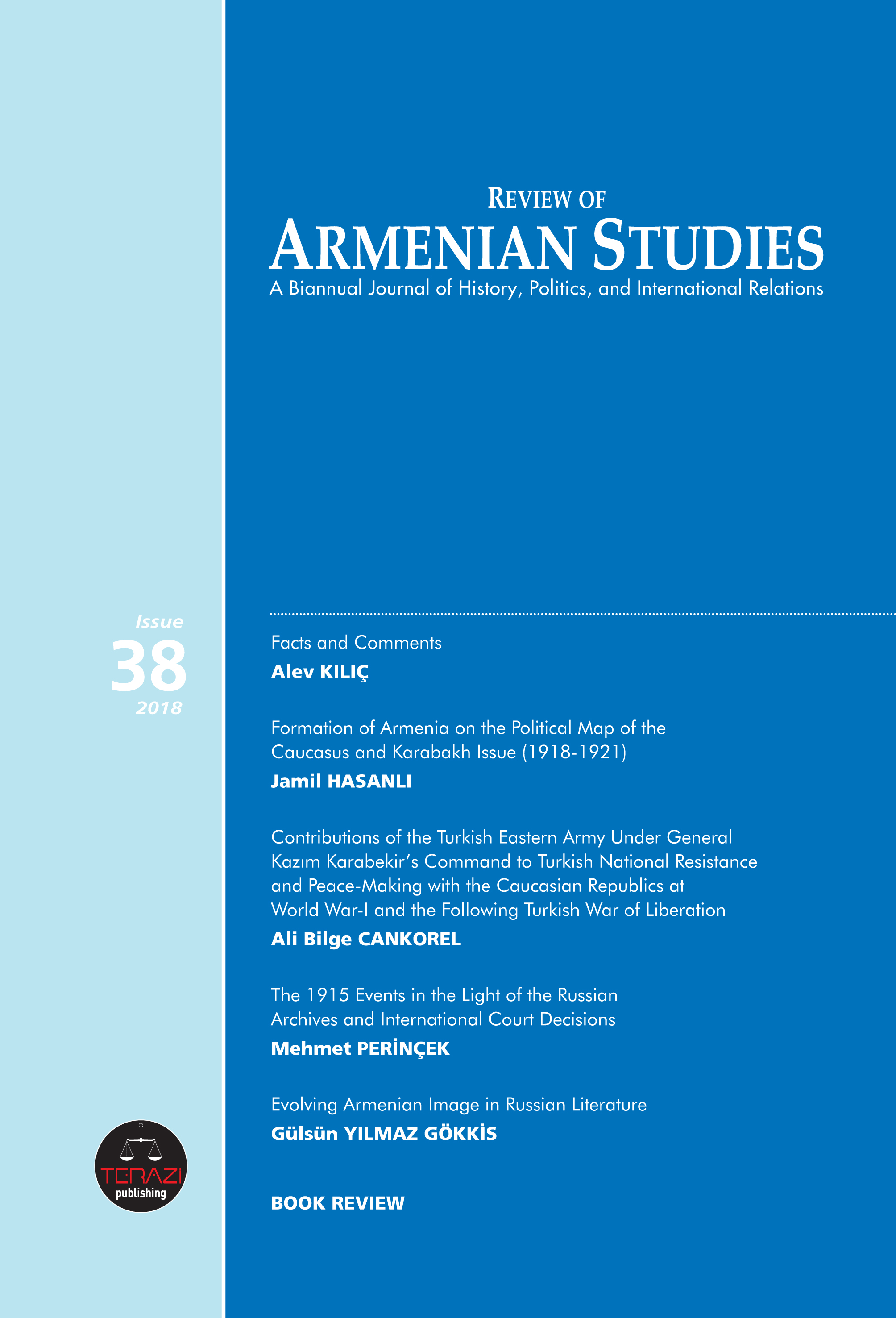 The first article in the 38th issue, titled “Facts and Comments” and authored by Alev Kılıç, covers Turkey-Armenia relations as well as domestic and international developments concerning Armenia between July-December 2018. Deriving strength from street protests and the masses who gathered there, and the resounding electoral victories, Armenia’s new Prime Minister Nikol Pashinyan put into action his campaign promise to fight wide spread corruption and to reckon with the legacy of the previous two administrations. In terms of foreign relations, Pashinyan has attempted to establish balance in Armenia’s relations with Russia and Western countries. Meanwhile, relations with Turkey has also been on the agenda, which has raised expectations in some circles that Turkey-Armenia relations could perhaps enter a new phase.

In his article titled “Formation of Armenia on the Political Map of the Caucasus And Karabakh Issue (1918-1921)”, Jamil Hasanli seeks to narrate the developments proceeding the 1917 revolutions that shaped the formation of Armenia in the political map of the Caucasus region, especially in terms of its implications for Azerbaijan and its Nagorno-Karabakh region. The interactions between various Soviet and local officials reveal that conflicting agendas were constantly at play concerning the future of Azerbaijan, Armenia, and Georgia, and the Soviet authorities sought to bolster Armenia and raise barriers between Azerbaijan and Turkey while attempting to avoid antagonizing Azerbaijanis and the other Muslims of the region. At the end, according to Hasanli, all these conflicting agendas during those times set the stage for the future Nagorno-Karabakh tragedy.

In his article titled “Contributions of the Turkish Eastern Army Under General Kazim Karabekir’s Command to Turkish National Resistance and Peace-Making with the Caucasian Republics at World War-I and the Following Turkish War of Liberation”, Ali Bilge Cankorel focuses on the military operations and correspondences of Turkish General Kazım Karabekir and the operations of the military units under his command at the Eastern Front during and after the First World War. Cankorel emphasizes that Karabekir and his troops played an indispensable role in retaking lost Turkish territories, establishing Turkish control in the east of Turkey and mitigating the violence that was being perpetrated against the Muslims of the region. Karabekir’s accomplishments in the field and the protection he and his troops provided were among the key elements that helped Mustafa Kemal Atatürk push through with the Turkish National Resistance against foreign occupation and in the shaping of Turkey’s borders with the Caucasus republics.

In his article titled “The 1915 Events in the Light of the Russian Archives and International Court Decisions”, Mehmet Perinçek uses archival documents of Russia’s Tsarist period to provide evidence and context to better understand the historical process that lead to the Ottoman Empire’s decision to relocate its Armenian subjects during the First World War. Using archival documents, Perinçek highlights the fact that large sections of the Ottoman Armenians led by the Dashnaktsutyun pursuing chauvinist policies collaborated with Russia that was in an all-out war with the Ottoman Empire, that the Dashnaktsutyun had resorted to massive violence against the Muslim population to change the demographic balance in the region according to its own chauvinist interest. Additionally, Perinçek goes over a number of key international and national court decisions to highlight the problematic nature of the genocide discourse concerning the Armenian relocation and resettlement.

In her articled titled “Evolving Armenian Image in Russian Literature”, Gülsün Yılmaz Gökkis analyses several important works of Russian literature from the A.S. Pushkin, A.S. Griboyedov, A.P. Chekhov, N.A. Teffi, O.E. Mandelshtam, and A.G. Bitov to demonstrate how the portrayal of Armenians transformed during the years between 1821-1969. Yılmaz Gökkis demonstrates that prior to the Sovietization of the Caucasus region and its peoples, the Armenians were being portrayed negatively to the point of being denigrated. In the Soviet era, however, a noticeable change occurs. As Yılmaz Gökkis points out, Armenians began to be portrayed much more positively to the point of being admired.

Lastly, Pulat Tacar, in his book review titled “Some Notes on Hans-Lukas Kieserʼs Biography on Talaat Pasha and Dr. Yücel Güçlüʼs Criticisms on the Book”, shares his comments and thoughts on Hans-Lukas Kieserʼs book titled Talaat Pasha: Father of Modern Turkey, Architect of Genocide and the review of the book authored by Yücel Güçlü published in the Journal of Muslim Minority Affairs. Tacar highlights the problematic nature of academically dubious works concerning the Turkish-Armenian controversy being published by prestigious Western publishing houses. Additionally, using his own as well as Güçlü’s analysis, Tacar demonstrates that Kieser’s biography concerning Talat Pasha reflects Kieser’s personal bias against Talat Pasha and contains substantial errors regarding Talat Pasha’s character and deeds.

If you wish to subscribe to the journal or buy the new issue, please contact: http://[email protected]