THE 35TH ISSUE OF THE REVIEW OF ARMENIAN STUDIES JOURNAL HAS BEEN PUBLISHED
Share : 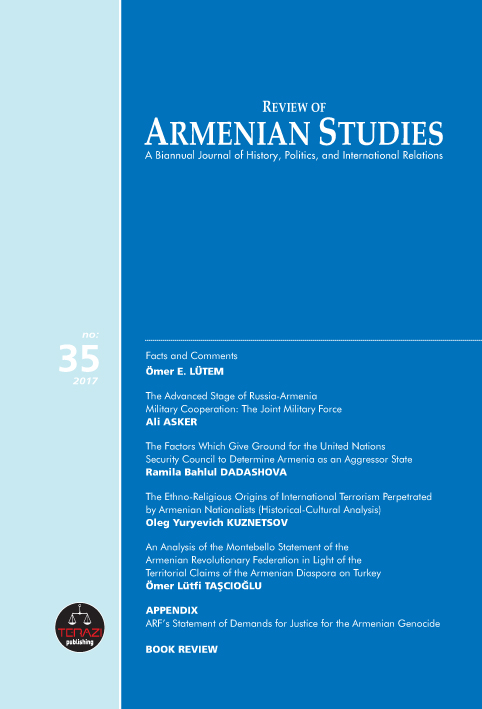 The first article in the 35th issue of the journal, penned by Ömer Engin Lütem, is “Facts and Comments”. This article examines Turkey-Armenia relations during the first half of 2017, in which no significant development took place within the said period. The article additionally looks at President of Turkey Recep Tayyip Erdoğan’s message to Turkey’s Armenians, April 24 commemorations in Turkey and elsewhere, and developments concerning the Armenia Question in certain countries such as the US and France.

In the article titled “The Advanced Stage of Russia-Armenia Military Cooperation: The Joint Military Force,” Ali Asker analyzes the nature and content of the close military cooperation between Russia and Armenia ever since the latter’s independence after the dissolution of the Soviet Union. The author also analyzes the most recent culmination of this close cooperation; the Joint Military Force of Armenia and Russia. Asker points out that Russia has transferred substantial amounts of armaments throughout the years to Armenia through this cooperation, which Armenia sees vital due to its sense of vulnerability against Azerbaijan and Turkey. The author points out that through this cooperation, Russia has been slowly but surely strengthening its influence on Armenia, threatening Armenia’s sovereignty and projecting power into the region.

Ramila Bahlul Dadashova’s article titled “The Factors Which Give Ground for the United Nations Security Council to Determine Armenia as an Aggressor State” argues that Armenia has fulfilled the necessary factors for it be designated as an ‘aggressor state’ by the United Nations Security Council, but that despite this, it has to this day not been designated as such. In her article, Dadashova exemplifies her argument by outlining the actions carried out by Armenia in the context of the Nagorno-Karabakh conflict that fit into the category of actions that an aggressor state might carry out. The author argues that the failure to designate Armenia as an aggressor state is the main factor for the continued nature of the Nagorno-Karabakh conflict.

Oleg Yuriyevich Kuznetsov, in his article titled “The Ethno-Religious Origins of International Terrorism Perpetrated by Armenian Nationalists (Historical-Cultural Analysis),” seeks to understand the theoretical and cognitive aspects of the Nagorno-Karabakh conflict. For this endeavor, Kuznetsov examines the identity-based and motivational factors that induced Armenian nationalist formations to carry out aggression against Azerbaijan in the events that constitute the Nagorno-Karabakh conflict. He argues that Nagorno-Karabakh conflict was not truly about a yearning for autonomy or independence, but rather an attempt to enable the Armenian diaspora, taken as a whole, to expand itself both politically and militarily in other countries, as well as in the Republic of Armenia itself.

The first book review by Hazel Çağan Elbir examines Legislating Reality And Politicizing History: Contextualizing Armenian Claims Of Genocide authored by Brendon J. Cannon. Elbir emphasizes that the aim of the book is to relay to the reader how the Armenian campaign to have the 1915 events recognized as genocide changed throughout time and the content of the accusations leveled against Turkey in regard to this campaign. Elbir points out that Cannon highlights identity formation as a driving force behind Armenians’ campaign to have the 1915 events labelled as genocide, and how the legally defined term ‘genocide’ has come to be used differently in public discourse.

The second book review, prepared by Sean Patrick Smyth, is regarding Talin Suciyan's book titled The Armenians in Modern Turkey: Post-Genocide Society, Politics and History. Smyth's review, while also mentioning the positive aspects of the work, emphasizes some glaring deficiencies that must be taken into consideration. These include the seemingly innocuous attempts by Suciyan to deny the role of the Armenian Revolutionary Federation's collaboration with Nazi Germany.