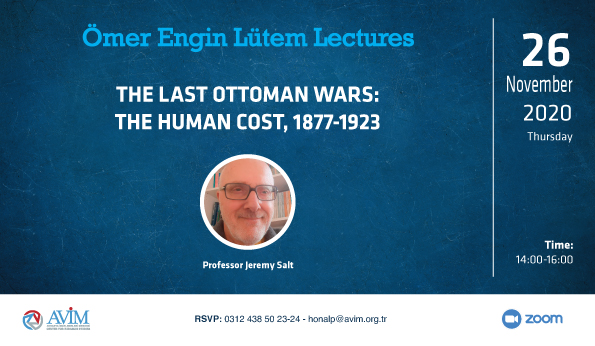 We are pleased to invite you to an online lecture by Professor Jeremy Salt, a retired academic who taught courses at University of Melbourne, Bogazici University, and Bilkent University, titled “The Last Ottoman Wars: The Human Cost, 1877-1923” that will be held on 26 November 2020.

In this lecture that is being organized in online format within the scope of Ömer Engin Lütem Lectures, Jeremy Salt will talk about his latest book titled The Last Ottoman Wars: The Human Cost, 1877-1923 (University of Utah Press, 2019). Salt will delve into why he decided to write it, why he chose this to examine the period covered by the book, and how he understands the developments within this period. Salt decided to focus on the cost to civilian life because, while there are numerous studies of battlefield campaigns and biographies of military commanders in bookshop, until recently, very little was written on how uprisings and war affected the civilian population. The book is intended as a general overview, taking in the Ottoman Empire’s lands in the Balkans and the Arab provinces as well as Anatolia, as a detailed history of the subject would require extensive research in the archives and one monograph after another, dealing with every aspect of civilian life.

While Salt hopes there will be much of interest for the book by Turkish readers, the target audience is ‘western’ readers whose understanding of the events covered in the book, insofar as they are interested or know anything about Ottoman history, has been shaped by an unbalanced narrative. Therefore, in his lecture, Salt will finally raise some questions regarding the shaping of the narrative in the western cultural mainstream, and how it affects Turks and Turkey. He will be hoping that participants will be raising many questions of their own as well.

The conference will be in English. There will be no translation service.