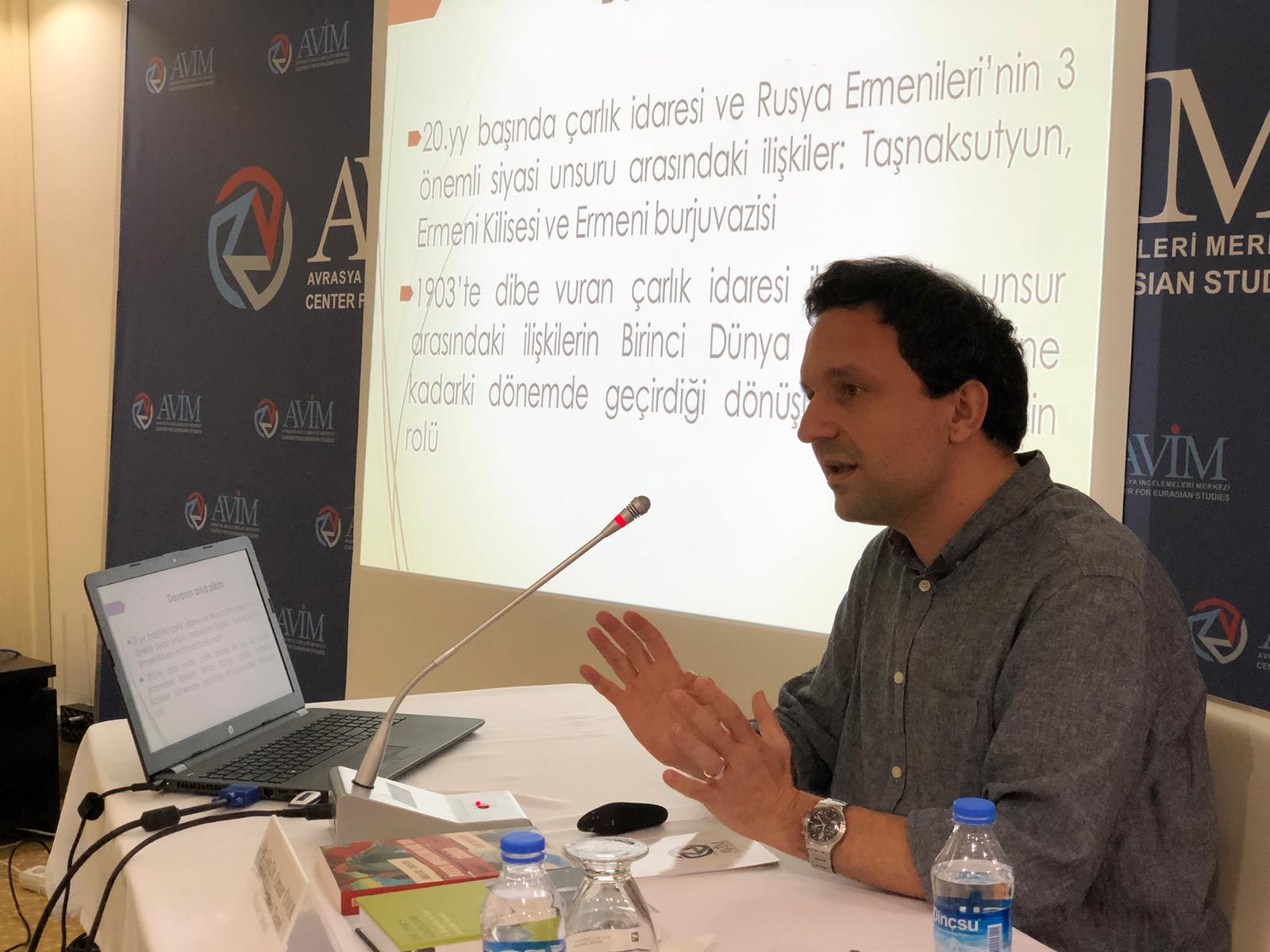 Dr. Önol’s presentation can be summarized as follows:

“One of the critical turning points in the process of the reestablishment of relations between the tsarist administration and Russian Armenians, which fell to the bottom with the decision of the tsarist government to confiscate the property of the Armenian Church in 1903, was the case of Dashnaksutyun (1908-12). When the tremor caused by the 1905 Revolution passed in the Russian Empire, the tsarist regime gradually cultivated its relations with the two other politically powerful elements, Armenian Church and the Armenian bourgeoisie. As the third element, the danger posed by the Dashnaksutyun and put the relations of the tsarist regime and the Armenian people in a difficult position, was not limited to the South Caucasus. According to the reports received by tsar Nicholas II and Prime Minister Pyotr Stolypin, it was emphasized that something needs to be done about this party, which actively supported the constitutionalist movements in the Ottoman Empire and Iran, neighbors of Tsarist Russia, and joined the Socialist International in Europe.

The trial lasting four years, began with the insistence of Stolypin, who thought that the moderate policies of the helm of the Viceroyalty of the Caucasus, Illarion Vorontsov-Dashkov, encouraged the parties like Dashnaksutyun. In addition to the investigation reports relating to the trial, considering the correspondences St. Petersburg and Tbilisi, the most essential side of this case in terms of the tsarist government was not latent in the penalties given in the final session of the trial. Some part of the party members went to jail or had to flee from Russia while the unit of the Dashnaksutyun in the South Caucasus was collapsing with the legal and police measures taken during the trial process. As of 1912, while the tsarist administration was subduing the only element, which it could not control, the administration set things right with Armenian Church and Armenian bourgeoisie, would have taken the advantage of these cultivated relations both in domestic and foreign policy from 1912 onwards. The Dashnaks, whose unit in Russia had highly damaged, would have to be reevaluated their party strategies.”

In the meeting held within the scope of Ömer Engin Lütem Conferences in 2019, Dr. Önol shared the story of this interesting case with the audiences as well as he put emphasis on how Russian Armenians were reconnected to the tsarist regime again on the eve of the First World War and its consequences.

The conference concluded with a lively question and answer session.