50TH ANNIVERSARY OF THE FOUNDING OF THE ASSOCIATION OF SOUTHEAST ASIAN NATIONS (ASEAN) COMMERATED IN ANKARA
Share : 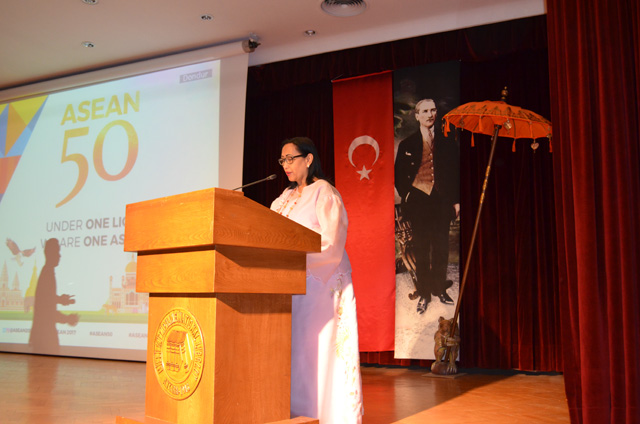 The 50th anniversary celebrations of the founding of the Association of Southeast Asian Nations (ASEAN) were held in Ankara on 13 September 2017 with the participation of the Ambassadors from AESAN countries. Ambassador of the Philippines Marina Rowena Mendoza Sanches hosted the event which was held on the grounds of the National Library. In her speech Sanches emphasized the role of Turkey in the ASEAN.

Turkey has made great strides in strengthening institutional bonds with ASEAN, which has developed into an indispensable platform for political and economic cooperation. Resultantly, Turkey accepted the ASEAN Treaty of Amity and Cooperation in 2010. The decision to launch the Sectoral Dialogue Partnership (SDP) between Turkey and ASEAN was taken at the Foreign Ministers’ Meeting on 5 August 2017 in Manila. The Sectoral Dialogue Partnership, which sets forth more concrete cooperation between ASEAN and third countries in various sectors is considered to represent a turning point in terms of the relations between Turkey and ASEAN. With a view to becoming a Dialogue Partner and as the new Sectoral Dialogue Partner of ASEAN, Turkey will continue its efforts to enhance its bilateral relations with ASEAN countries and advance its institutional ties with ASEAN.