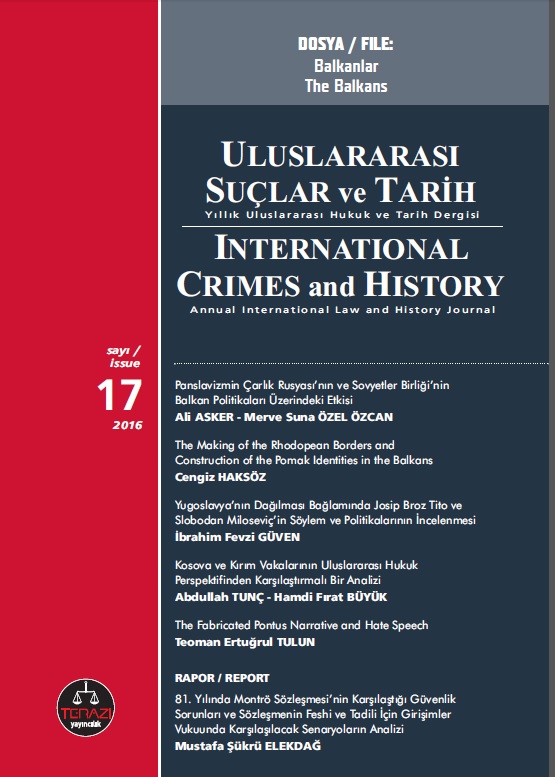 The Balkans has been at the intersection of various migration routes throughout history; different peoples have left their footmarks on the Balkan soil throughout their journeys. These peoples uprooted, swallowed, or mixed with other groups, or they were assimilated by
them in a process that eventually led to the emergence of new ethnonational and ethno-religious identities over time. As a result of these intense, centuries long, continuous, contingent, and casual interactions, the Balkans became one of the most ethnically diverse geographies in the world.

Population movements and interactions do not occur in a vacuum. They both affect and are affected by the socio-political context. Between the 15th and 19th centuries, population movements and interactions took place within the context of the imperial rules, particularly the rule of the Ottoman Empire. By the beginning of the 19th century, empires began
to collapse, giving way to nation-states as new and novel political formations. Within a hundred years or so, the social, economic, and political landscape of the Balkans transformed dramatically. During this period, conflicts and clashes led to voluntary or forced migrations in
various forms, which significantly transformed the ethno-demographic structure of the peninsula. During World War II and the following Cold War era, population movements were also witnessed albeit in smaller scales. The end of the Cold War was followed by merciless ethnic  clashes that also resulted in changes in the ethno-demographic structure of the peninsula as a consequence of massacres, and voluntary or forced migrations. Today, the Balkans is a transit route of a huge migration wave from the Middle East (particularly from Syria), which renders it a stage for tragic scenes.

The 17th issue of International Crimes and History focuses on this geography, which is still dominated by complex political and social dynamics.

The article titled Panslavizmin Çarlık Rusyası’nın ve Sovyetler Birliği’nin Balkan Politikaları Üzerindeki Etkisi (The Influence of Panslavism in Tsarist Russia’s and Soviet Union’s Balkan Policies) written by Ali Asker and Merve Özel Özcan analyzes Panslavism which is one of the most important currents in the Russian history of thought. This study, which addresses the historical development, transformation, impact and results of Panslavism, provides the readers with a historical analysis about the place and function of Panslavism in the Russian foreign policy on the Balkans and contemporary Russian nationalism.

Cengiz Haksöz’s article titled The Making of the Rhodopean Borders and Constructıon of the Pomak Identities in the Balkans analyzes the identity formation of the Pomaks, a Slavic-speaking Muslim community, within its relationality with Bulgarian, Greek and Turkish nation building processes. Within this framework, Haksöz elaborates on the formation of borders in the Rhodopes and how formation of borders affected the making of the identities of Pomaks in Bulgaria, Greece and Turkey.

During the dissolution of Yugoslavia in 1990’s, a tragic period of conflicts and massacres with great humanitarian tragedies took place. The fact that communities that once lived together or side by side later engaged in destructive and bloody conflicts is an historical process that should be analyzed and taken lessons from. İbrahim Fevzi Güven, in his
article titled Yugoslavya’nın Dağılması Bağlamında Josip Broz Tito ve Slobodan Miloseviç’in Söylem ve Politikalarının İncelenmesi (Examination of the Discourses and the Politics of Josip Broz Tito and Slobodan Milosevic in the Context of the Dissolution of Yugoslavia), comparing the attitude and policies of two Yugoslavian leaders Tito and
Milosevic, examines the dissolution of Yugoslavia and analyzes how the different ideologies and policies of the two leaders influenced the fate of Yugoslavia.

Russia’s annexation of Crimea consequenced by the emergence of one of the most significant international law and foreign policy issues after NATO’s Kosovo intervention. Russia tries to legitimize its policy of invasion by citing NATO’s intervention in Kosovo. Abdullah Tunç and Hamdi Fırat Büyük, in their study titled Kosova ve Kırım Vakalarının Uluslararası Hukuk Perspektifinden Karşılaştırmalı Bir Analizi (A Comparative Analysis of Kosovo and Crimea Cases from an International Law Perspective), address the Kosovo intervention and the
annexation of Crimea with reference to international law, and their historical, demographical and political aspects, and analyze similarities and differences of the two events. Ultimately, Tunç and Büyük reveal the basic differences between two cases, and demonstrate that the Kosovo case can not be a precedent for the annexation of Crimea.

In addition to this studies that focus on the Balkans, the present issue of International Crimes and History also includes Teoman Ertuğrul Tulun’s study titled The Fabricated Pontus Narrative and Hate Speech, which addresses the “Pontian Genocide” narrative that has been voiced since the end of the 1980s. This study, which is based on a comparative analysis of Greek and Turkish sources, points to hate speech that is integral to the “Pontian Genocide” narrative.

Ali Asker is the Head of Karabük University International RelationsDepartment.  Asker graduated from Azerbaijan Technical Universityin 1993 and Baku State University Faculty of Law in 1997. He gained hismaster’s  degree  in  Public  Law  at  Marmara  University  in  2000.  Hecompleted his doctoral studies in the same field at Ankara University in2007. Asker is an Associate Professor of Regional Studies. His researchfocuses on Post-Soviet countries, the Caucasus and the Turkish World.

Hamdi Fırat Büyük is currently a visiting research fellow at Universityof Sarajevo’s Faculty of Political Science. His main research interestsare the Balkans, Turkey-Balkan relations, and EU enlargement policies.In Turkey, Büyük worked in think-tanks and the media sector. Büyük is aregular contributor to various national and international media outlets, andoften conducts fieldwork in the Balkans. Büyük is currently pursuing hisPh.D. with his dissertation titled Balkan Muslims in AKP Period TurkishForeign Policyin International Relations at Ankara University Faculty of Political Sciences. Heobtained a B.A. in Business Administration and International Relations from Kadir Has University,and received a M.Sc. in International Relations from University of Essex with his thesis titledTurkey’s Soft Power in the Balkans.

Mustafa Şükrü Elekdağ, after graduating from İstanbul Yüksek İktisatve Ticaret Okulu, completed his masters and doctoral studies inEconomics  at  La  Faculté  de  Droit  et  des  Sciences  EconomiquesL’université Paris-I-Panthéon-Sorbonne. Elekdağ joined the Turkish MFAin 1951. He served as ambassador in Tokyo, undersecretary of the TurkishMFA, and ambassador in Washington. He retired in 1989. Elekdağ taughtcourses at Bilkent University between 1990 and 2002. He was a memberof the parliament as a deputy of Istanbul at 22ndand 23rdlegislative terms. He has made numerouscontributions  to various media organs.

Cengiz Haksöz has a B.A. degree in Political Science and InternationalRelations  from  Marmara  University  (2003)  and  M.S.  degree  inSociology from Middle East Technical University (2007). He is a PhDcandidate in Anthropology at University of Pittsburgh, and in Sociology atMiddle East Technical University. His main geographical areas of interestinclude the Balkans, Eastern Europe, Turkey, and North America. Histheoretical interests lie in the sphere of food, collective memory, landscapes,borderlands, identity, minorities, ethnicity, language, religion, nationalism and urban studies. Hisdissertation at University of Pittsburgh focuses on use of various landscapes in post-socialistperipheral cities in Bulgaria.

Abdullah Tunç is currently pursuing a Ph.D. at Georgia State UniversityPolitical Science Department. He completed his master degree atAnkara University Public Law Department by defending his dissertationtitled Intervention  by  Invitation  in  International  Law.  His  academicinterests in international law include use of force, humanitarian law andcivil war. He has published numerous commentaries and analyses. Havingearned his undergraduate degree from Bilkent University Law Department,Tunç completed his law internship at Ankara Bar Association.