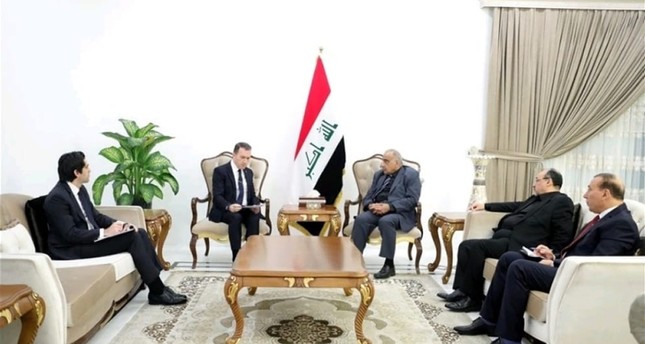 Abdul-Mahdi expressed Iraq's eagerness to develop relations with neighboring Turkey in all fields to serve mutual interests and stability in the region.

They also discussed cooperation in the economy and water and reconstruction sectors as well as President Recep Tayyip Erdoğan's upcoming visit to Iraq.

In the wake of Daesh's defeat, Iraq has faced the task of rebuilding its country and restoring security. In February 2018, governments from around the world pledged billions of dollars in loans and investments for the reconstruction of Iraq. Turkey pledged $5 billion in loans and investments at the conference in Kuwait, making the country one of the top contributors.

Accordingly, Turkey will help redevelop the cities of Kirkuk, Mosul, Tal Afar, Baghdad, Irbil and Sulaymaniyah through the Turkish International Cooperation and Development Agency (TİKA) to help Iraqis return to their homes.

Another major issue between Turkey and Iraq is water management. Drought and low precipitation have been a significant problem in Iraq. Turkey depends on water from the Tigris to fill a reservoir behind its Ilısu Dam near the Iraqi border. Iraq has asked for a larger share of the river's flow amid shortages, particularly in the southern province of Basra.

Ankara and Baghdad have a working group on water-related issues. One of its focuses is solving water problems in Basra to prevent diseases emanating from usage of unhealthy water. The group is also working to improve modern irrigation infrastructure and increasing productivity. It also plans to train Iraqi experts, engineers and technical personnel on waste management, wastewater treatment and hydrology.

Turkey and Iraq have witnessed an uptick in high-level visits this year. Abdul-Mahdi visited Turkey in May and met with President Recep Tayyip Erdoğan to discuss bilateral ties and the fight against terrorism. In late April, Foreign Minister Mevlüt Çavuşoğlu visited Iraq and met with his counterpart Mohamed Ali Alhakim. In January, Iraqi President Barham Salih also visited Turkey and held talks with President Erdoğan, agreeing on enhancing cooperation in all fields.