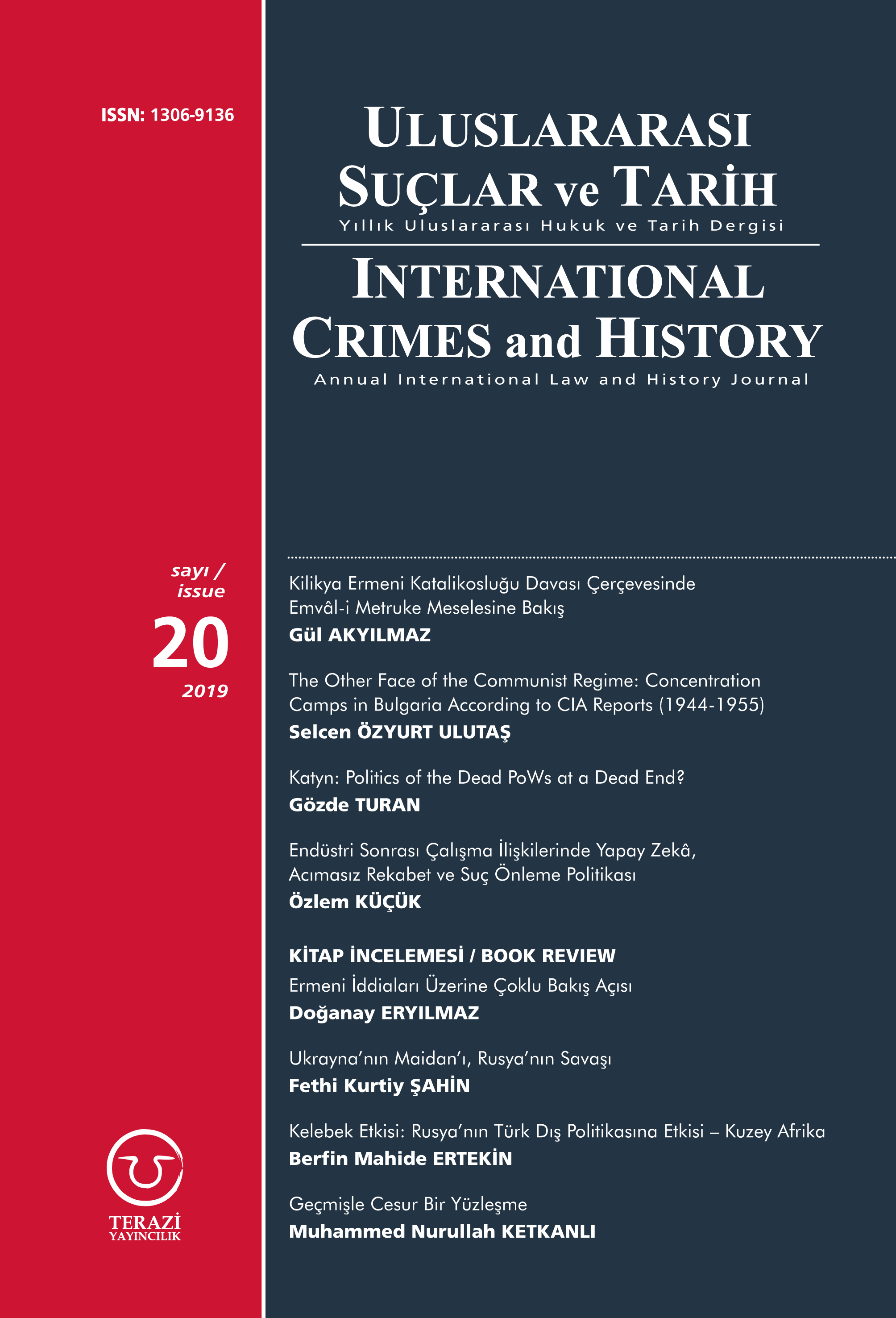 The first research article in this issue is Gül Akyılmaz’s “Kilikya Ermeni Katalikosluğu Davası Çerçevesinde Emvâl-i Metruke Meselesine Bakış” (A Look at the Emvâl-i Metruke Question in Relation to the Armenian Church Catholicosate of Cilicia Lawsuit).In this article, Akyılmaz focuses on the question of the properties that were left behind by the Armenians who were subjected to relocation and resettlement by the Ottoman Empire during the World War I (known as Emvâl-i Metruke) as one of the disputes that was inherited to Turkey from the Ottoman Empire. Observing that in recent years the number of lawsuits on religious and non-Muslim foundations is increasing, Akyılmaz studies the process that was opened by the lawsuit filed by the Armenian Apostolic Church, also by name Armenian Catholicosate of Cilicia in Lebanese records, on 28 April 2015 in Turkey. On this ground, she investigates how regulations regarding Emvâl-i Metruke, Ottoman land regime, and Ottoman laws on foundations would affect the decisions of the Turkish courts and the European Court of Human Rights.

“The Other Face of the Communist Regime: Concentration Camps in Bulgaria according to CIA Reports (1944-1955)” penned by Selcen Özyurt Ulutaş is the second research article in this issue. Ulutaş in this article investigates oppressive policies of the communist regime in Bulgaria, which came to power after the collapse of the fascist rule in Septeber 9th, 1944, that targeted the ethnic and religious groups deemed as adversary to the government. Within this framework, she addresses the oppressive measures of the communist regime between 1944 and 1955 as described in the CIA reports.

The third research article is Gözde Turan’s “Katyn: Politics of the Dead PoWs at a Dead End?” In this article that discusses the massacre of approximately 15,000 Polish prisoners of war in the Katyn forest in Poland, Turan reflects on the ways in which different actors interpret this massacre and how they utilize this tragedy as a political instrument. Accordingly, she provides an outlook on this tragedy that goes beyond Realpolitik analyses.

The last research article in this issue titled “Endüstri Sonrası Çalışma İlişkilerinde Yapay Zekâ, Acımasız Rekabet ve Suç Önleme Politikası” (Artificial Intelligence, Fierce Competition and Crime Prevention Policy in Post-Industrial Labor Relations). The author of the article, Özlem Küçük, addresses the developments in industry and technology and discusses the ways in which progress in the field of artificial intelligence may affect public security.

Fethi Kurtiy Şahin’s “Ukrayna’nın Maidan’ı, Rusya’nın Savaşı” (Ukraine’s Maidan, Russia’s War) reviews Mychailo Wynnyckyj’s “Ukraine’s Maidan, Russia’s War: A Chronicle and Analysis of the Revolution of Dignity,” a monograph that examines the EuroMaidan revolution in Ukraine, which took place between November 2013
and February 2014, and the effects of this revolution.

Berfin Mahide Ertekin in her “Kelebek Etkisi: Rusya’nın Türk Dış Politikasına Etkisi – Kuzey Afrika” (Butterfly Effect: The Impact of Russia on Turkish Foreign Policy –North Africa) examines Numan Hazar’s “Sovyet Tehdidinin Gölgesinde Türk Dış Politikası Kuzey Afrika Örneği” (Turkish Foreign Policy on North Africa under the shadow of the Soviet Threat), in which Hazar addresses the Turkey’s approach of allying with the West at the face of threatening policies of the USSR after the World War II and the limits that this approach had imposed on Turkish foreign policy by focusing on the example of North Africa.

The last book review in this issue is the review titled “Geçmişle Cesur Bir Yüzleşme” (A Brave Encounter with the Past) penned by Muhammed Nurullah Ketkanlı. Ketkanlı in this article reviews Svetlana Aleksiyeviç’s (Svetlana Alexievich) “İkinci El Zaman- Kızıl İnsanın Sonu” (Secondhand Time: The Last of the Soviets), the third edition of which was published in Turkish in July 2018, in which Aleksiyeviç tells the story of the “ordinary person” in Soviet times, which has not found its representation in the official historical narratives.

Gül Akyılmaz gained her master’s degree in Public Law from Selçuk University Social Sciences Institute in 1987. She earned her doctoral degree in Public Law from the same institute in 1990. Since 2004, Akyılmaz has been working as a Professor of History of Law at Hacı Bayram Veli University (Gazi University). Akyılmaz has also been the Head of the same History of Law Department. She is the author of five books and numerous book chapters and articles published in Turkish and international peer-reviewed journals.

Selcen Özyurt Ulutaş is an Assistant Professor at Uşak University Department of History. She earned her master’s and doctoral degrees from Ege University Institute of Turkish World Studies. Her research focuses on the Turkish history in the Balkans. She is the author of numerous studies on Turkish history and belief systems particularly in Bulgaria. She continues her research on the rights of the ethnic and religious minorities in Balkans, Anatolia, and Central Asia. Selcen Özyurt Ulutaş is fluent in English and Bulgarian.

Fethi Kurtiy Şahin is a research assistant at Middle East Technical University (METU) Graduate School of Social Sciences and a Ph.D. Candidate in Area Studies in the same university. His recent research focuses on post-Soviet space, nationalisms, ethnicity, Ukraine and Crimean Tatars. He was awarded by the Mustafa N. Parlar Foundation in 2016 for his master thesis entitled “Crimean Tatar Factor and Euromaidan in Ukraine’s Nation Building Efforts: Novelties and Changes after 2014.”

Berfin Mahide Ertekin completed her undergraduate studies at TOBB University in 2019. In the same year, she joined the Center for Eurasian Studies (AVIM) as a scholar in residence. Her research areas are Turkish-Armenian relations, Armenian diaspora and the Caucasus.