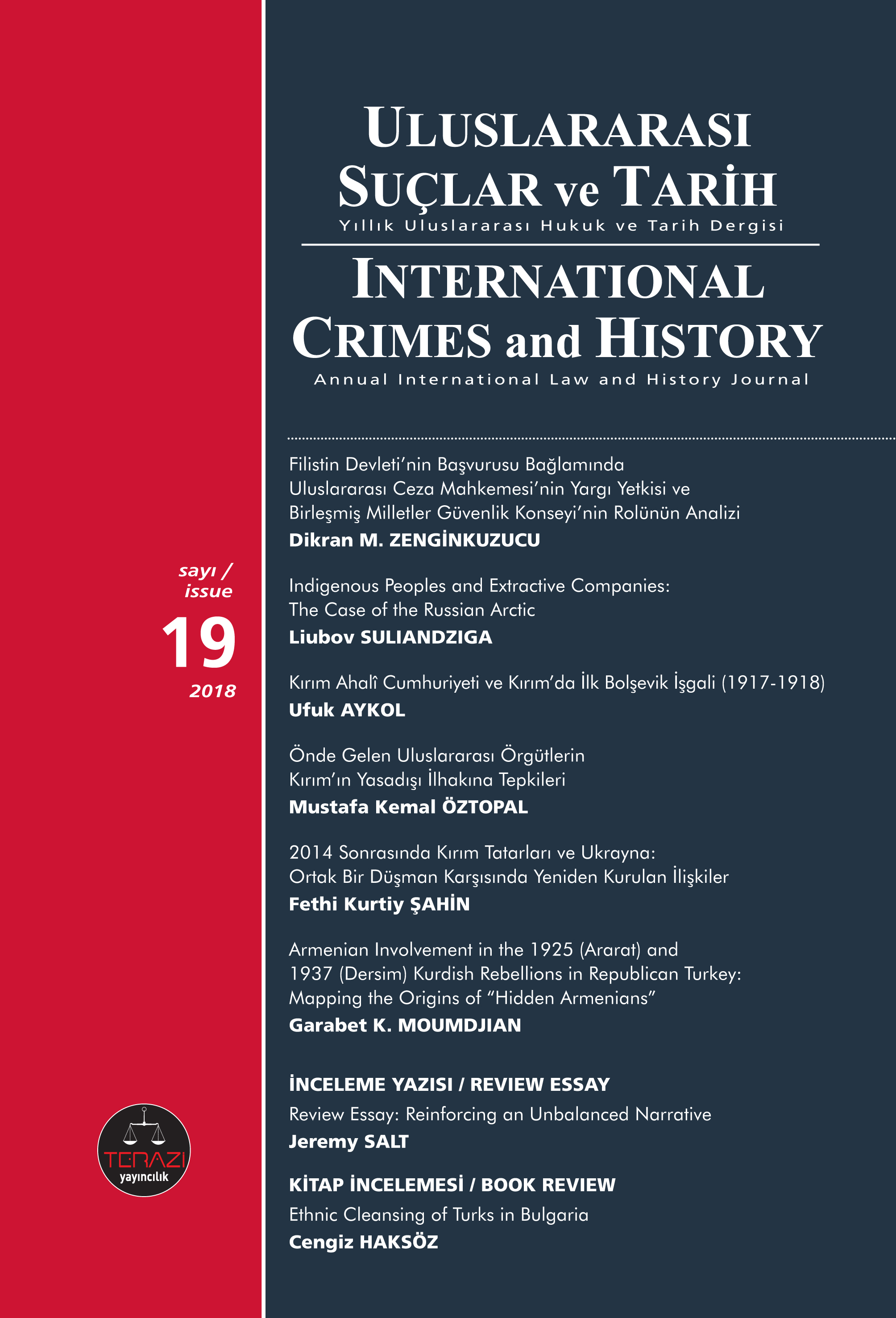 The first article in this issue is Dikran M. Zenginkuzucu’s “Filistin Devleti’nin Başvurusu Bağlamında Uluslararası Ceza Mahkemesi’nin Yargı Yetkisi ve Birleşmiş Milletler Güvenlik Konseyi’nin Rolünün Analizi” (Jurisdiction of International Criminal Court in the Context of the Referral of the State of Palestine and an Analysis of the Role of United Nations Security Council). In this study, Dikran M. Zenginkuzucu addresses the Israel-Palestine conflict, which has been a cause of humanitarian, sociological and political deadlock in the Middle East for decades. One of the most significant dimensions of this conflict, which is one of the most important reasons of the chaos occurring in the Middle East impacting the world politics, and its possible resolution, is undoubtedly its legal dimension. In his study, Dikran M. Zenginkuzucu analyses the State of Palestine’s applications to the International Criminal Court for its claims about the crimes against humanity and war
crimes that Israel has committed. In this context, he analyses the International Criminal Court’s jurisdiction ratione temporis, personae and materiae, and, in this framework, he examines the UN Security Council’s possible roles regarding the subject and the probable outcomes.

Access to and control of energy resources and minerals is one of the most important aspects of the political competition in the international domain. Together with the relevance of this issue for international politics, extraction of resources and the sharing of the obtained profits is also a matter of significance with respect to domestic welfare policies. In her study titled “Indigenous Peoples and Extractive Companies: The Case of the Russian Arctic,” Liubov Suliandziga addresses this subject in the context of the Russian Federation and evaluates the relations between the resource (oil, gas and mining) companies and the indigenous communities in the Russian Artic in the framework of the question of benefit-sharing. In her study, Liubov Suliandziga displays that indigenous communities in Russian Artic with rich energy and mineral resources benefit insufficiently from the profits obtained from the resources being extracted from their own soil.

The academic and political interest regarding Crimea and its indigenous people, the Crimean Tatars, is understandably increasing due to Crimea’s occupation and illegal annexation by the Russian Federation in February-March of 2014. Thusly, UST/ICH had reserved its 16th issue published in 2015 to Crimea and the Crimean Tatars. In the last five years, no solution has appeared in sight to Crimea’s occupation and illegal annexation and to the consequent difficulties that Crimean Tatars have been encountering.

The UST/ICH’s present issue includes three studies that focus on Crimea and the Crimean Tatars. The first one is Ufuk Akyol’s article titled “Kırım Ahalî Cumhuriyeti ve Kırım’da İlk Bolşevik İşgali (1917-1918)” (The Crimean People’s Republic and the First Bolshevik Invasion of Crimea (1917-1918)). This article focuses on the three-month period between 1917-1918 when Crimea was occupied by the Bolsheviks for the first time. In this article Ufuk Akyol examines the 1917-1918 Bolshevik occupation of Crimea and how Bolsheviks crashed down the young but fast developing Crimean Tatar national movement that aimed at a Crimean Tatar state.

The sixth article in this issue is titled “Armenian Involvement in the 1925 (Ararat) and 1937 (Dersim) Kurdish Rebellions in Republican Turkey: Mapping the Origins of “Hidden Armenians”.” In this article Garabet K. Moumdjian focuses on Armenian Revolutionary Federation- Dashnaktsutyun’s role in the Kurdish uprisings in the early Republican era. Although we find Moumdjian’s characterization of the tragic events of 1915 extra legem and unacceptable, his article provides hitherto unpublished Dashnak and other Armenian archival documents concerning the participation of Armenian militants in the Ağrı and Dersim uprisings which took place during 1930s. We believe that the documents published therein would help fill an existing gap in the literature concerning this point, since primary documents published from the Dashnaktsutyun archives and excerpts from the memoirs of the key figures of the Dashnak committee leaves no doubt as to the participation of the Dashnak and other Armenian elements in the Kurdish uprisings of 1930s. We trust that this article will also reflect on the current state of affairs of Armenian-Kurdish relations.

Ufuk Aykol graduated from Bilecik Şeyh Edebali University with his thesis titled “Kırım Mecmuası’nda Tatar Kimliği (1918-1919)” (Tatar Identity in the Journal of Kırım Mecmuası (1918-1919)). He currently pursues a master’s degree at Hacettepe University Institute of Social Sciences Department of History with his thesis titled “Müstakil Kırım Hanlığı’nın İlk Dönemi (1774-1777)” (The First Period of the Independent Crimean Khanate (1774-1777)). Aykol, who also works as a history teacher at Beykoz Çavuşbaşı High School, has been on the editorial board of “Türk Edebiyatı”(Turkish Literature), which is a literary journal published by Türk Edebiyatı Vakfı (Turkish Literature Foundation), since 2016.

Garabet K. Moumdjian holds a Ph.D. in History from University of California at Los Angeles (UCLA). He has held several academic positions. He has written a multi-volume Armenian history textbook for grades 4 through 9, titled “Our History” (Mer Badmutyune). He is the author of two academic tomes and has about ten chapters in academic volumes, as well as scores of articles in academic journals.

Mustafa Kemal Öztopal graduated from the University of Economics and Entrepreneurship Faculty of Turkish World Business Department of International Relations (Kyrgyzstan) in 2009. In 2017, he earned his master's degree from Giresun University Institute of Social Sciences Department of International Relations with his thesis titled “Rusya Federasyonu’nun Kırım’ı İlhakına Uluslararası Tepkiler” (International Reactions towards Annexation of Crimea by the Russian Federation). He is currently working at Giresun University Espiye Vocational School. His main research areas are Eurasia, the Black Sea Basin and Central Asia.

Cengiz Haksöz has a B.A. degree in Political Science and International Relations from Marmara University (2003), and a M.S. degree in Sociology from Middle East Technical University (METU), Ankara (2007). He is a Ph.D. candidate in Anthropology at the University of Pittsburgh, and in Sociology at METU. Cengiz Haksöz’s main geographical areas of interest are the Balkans, Eastern Europe, Turkey, and North America and his theoretical interests lie in the sphere of food, collective memory, borderlands, identity, minorities, ethnicity, language, religion, nationalism, landscapes and urban studies.

Liubov Suliandziga graduated from Moscow State Linguistic University as a specialist in International Relations and Social-Political Studies with two foreign languages (English and French). In 2013, she received her MA in European Studies from Catholic University of Leuven in Belgium. In 2014, she was enrolled in the Master Program in Comparative Studies and Administration in Asia at Kyushu University Faculty of Law in Japan in the framework of Double Degree Program. From 2009 to 2012, Liubov Suliandziga was involved in RAIPON (the Russian Association of Indigenous Peoples of the North) and CSIPN (Center for Support of Indigenous Peoples of the North) activities, studied violation of indigenous rights, analyzed living standards of Russian indigenous peoples, and participated in conferences of the UN and the World Bank. She continues her studies on the rights of the indigenous peoples and works as a research assistant in Kyushu University, Faculty of Social and Cultural Studies.

Fethi Kurtiy Şahin is a research assistant at Middle East Technical University (METU) Graduate School of Social Sciences and a Ph.D. Candidate in Area Studies in the same university. His recent research focuses on post-Soviet space, nationalisms, ethnicity, Ukraine and Crimean Tatars. He was awarded by the Mustafa N. Parlar Foundation in 2016 for his master thesis entitled “Crimean Tatar Factor and Euromaidan in Ukraine’s Nation Building Efforts: Novelties and Changes after 2014.”

Born in 1970 at Istanbul, Assist. Prof. Dikran M. Zenginkuzucu graduated from Ankara University Faculty of Political Science in 1994. He was awarded a post-graduate fellowship of International Human Rights Institute in Strasbourg in the same year. He gained his doctoral degree from Istanbul University in 2011. He is the author of three books. He has also published various articles in national and international journals, and presented papers in conferences. He is presently a lecturer at Istanbul Esenyurt University Department of Political Sciences and International Relations. He is working on the fields of international law, international investment law, international organizations, dispute settlement and human rights. Dikran M. Zenginkuzucu is fluent in English, French and Armenian.

Jeremy Salt is a former lecturer/professor at the University of Melbourne, Boğaziçi University, and Bilkent University. Throughouthis academic career, he taught courses on modern Middle Eastern history,religion and politics in the Middle East, media and politics, andpropaganda. He is the author of two books; “Imperialism, Evangelism andthe Ottoman Armenians 1878-1896” (Frank Cass, London, 1993) and “TheUnmaking of the Middle East. A History of Western Disorder in Arab Lands”(Berkeley: University of California Press, 2008). A third, “The Last Ottoman Wars. The Human Cost1877-1923,” will be published in 2019. His articles have appeared in the following journals, amongothers: Middle East Policy, Third World Quarterly, Middle Eastern Studies, Muslim World, CurrentHistory, International Journal of Turkish Studies, Journal of Palestine Studies, and Review ofArmenian Studies.