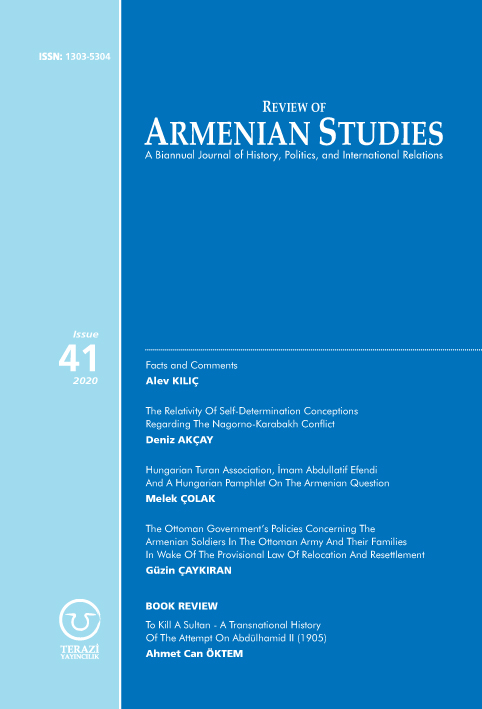 As always, the first article in the 41st issue of our journal is “Facts and Comments”. This article covers Turkey-Armenia relations as well as Armenia’s domestic and international developments between January and July of 2020. The government of Nikol Pashinyan has experienced difficulties in fulfilling its promises to the electorate. In retaliation, the government has targeted the bureaucracy since it has been accused of being a remnant of the previous administrations and standing in the way of the current government’s “progress”. The Nagorno-Karabakh conflict has continued to give ammunition for the political opposition in Armenia and has resulted in short but serious armed border clashes between Armenia and Azerbaijan. Armenia has continued its pursuit of a “multi-vector” approach in foreign policy, looking for new openings as relations with Russia show signs of strain and approach towards Turkey has become even more negative. Just like the rest of the world, the COVID-19 pandemic has taken a heavy economic toll on Armenia.

In her article titled “The Relativity of Self-Determination Conceptions Regarding the Nagorno- Karabakh Conflict”, Deniz Akçay evaluates the legal merits of the OSCE Minsk Group’s insistence on approaching the Nagorno-Karabakh conflict from the angle of the self-determination formula. Nagorno-Karabakh is currently under the dominating influence of Armenia, meaning the region cannot exercise a will of its own. Meanwhile, the Minsk Groups seems to have veered away from principles of territorial integrity and inviolability of borders concerning this conflict. Analyzing international agreements, court rulings and advisory opinions, the UN resolutions concerning the conflict, and the conditions in which Armenia and Azerbaijan were accepted as members of the UN, Akçay concludes that self-determination cannot not be used as a realistic formula for the resolution of the Nagorno-Karabakh conflict.

In her article titled “Hungarian Turan Association, İmam Abdullatif Efendi and a Hungarian Pamphlet on the Armenian Question”, Melek Çolak analyzes a Hungarian-language pamphlet published in Hungary by İmam Abdüllatif Efendi in the early 1920s explaining the unfair disposition of the European public towards the Armenian Question and the Turkish National Struggle that led to the establishment of the Republic of Turkey. Using documentary evidence, the pamphlet sought to disprove the British smear campaign concerning these issues and to properly inform the Hungarian public about these same issues. Çolak additionally shares information about Pan-Turanism in Hungary during that period, the activities of the Hungarian Turan Association, and the circumstances of İmam Abdüllatif Efendi presence in Hungary. It seems that Abdüllatif Efendi served as a bridge between the Hungarian Turanists and the Turkish government during the National Struggle, and the pamphlet was meant to function as a counter-propaganda tool against those who sought to turn the Hungarian public against the Turkish National Struggle.

Lastly, Ahmet Can Öktem analyzes the book titled To Kill A Sultan - A Transnational History of the Attempt on Abdülhamid II (1905) edited by Houssine Alloul, Edhem Eldem, and Henk de Smaele. Öktem explains that each chapter of the book deals with various aspects of the 1905 Yıldız assassination attempt against Ottoman Sultan Abdülhamid II from several angles. In this respect, the authors narrate the interaction between the Ottoman Empire and its European counterparts, the domestic and international repercussions of the assassination attempt, and introduces the perpetrators of the attempt such as the ARF and the controversial Belgian anarchist Edward Joris. Öktem indicates that although the book makes for an interesting read, it may also confuse its readers due to the sheer amount of information and perspectives introduced during its narration. Öktem argues that the book is important in the sense that it goes into issues that resonate today, such as terrorism’s influence on international relations and law, and “how the perceptions towards terrorism can vary with different parties and conditions.”