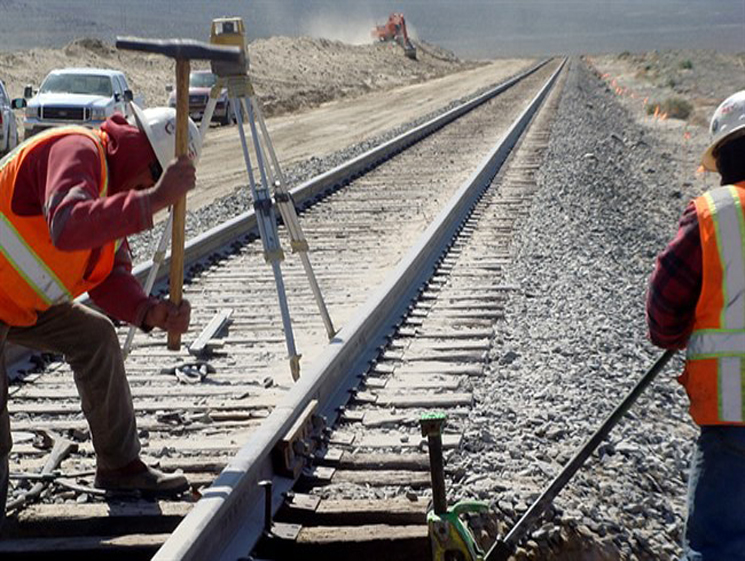 Russian, Iranian and Azerbaijani presidents—Vladimir Putin, Hassan Rouhani and Ilham Aliyev, respectively—held a trilateral summit in Tehran, on November 1. They stressed the necessity to complete the Resht–Astara railway as soon as possible, with a view to developing the North–South Transport Corridor (NSTC). The NSTC will connect India and Southeast Asia to Russia and Northern Europe, via Azerbaijan and Iran (Kremlin.ru, November 1). During the summit, Azerbaijan’s President Aliyev announced the successful conclusion of negotiations to issue a $500 million loan to Iran to complete the missing Resht–Astara segment of the railway (President.az, November 1). As a result of this project, St. Petersburg, Russia, will be connected to the Iranian port of Bandar Abbas, on the Persian Gulf, via a direct railway link. President Putin specifically expressed support for the construction of the NSTC’s last missing segment—the western Caspian route, which includes the Resht–Astara rail line (Kremlin.ru, November 1).

A long-proposed alternative to the western Caspian (or Azerbaijani) route within the NSTC is the Armenian-Iranian rail link, also known as the South Armenian Railway, which would connect Iran’s Bandar Abbas port to the Black Sea and Russia through Armenia and Georgia (Regnum, October 17, 2016; Civilnet.am March 23, 2017; EurAsia Daily, January 13, 2016; Ritmeurasia.org, February 17, 2016). However, since Baku is a crossing point for both North–South and East–West transcontinental transport corridors currently under development, Azerbaijan has gained a great opportunity to synergize the Russia–Azerbaijan–Iran railway with the just inaugurated Baku–Tbilisi–Kars (BTK) railroad, which is part of the East–West “Silk Road” corridor from China to Europe. Indeed, President Aliyev pointedly mentioned last month that the two transport corridors would be integrated (President.az, October 30, 2017). Such synergy of the North–South and East–West transport infrastructures rules out any prospects for the South Armenian Railway. This effectively puts an end to Armenia’s ambitions to become a regional transit country and adversely affects it politically as well as economically. Yet, Armenia’s closest ally, Russia, has essentially been unsupportive of Yerevan’s position on this issue. Why?

First, the Azerbaijani route will solidify the blockade on Armenia implemented by Azerbaijan and Turkey due to the Karabakh conflict. And the more isolated Armenia is, the more dependent on Russia it becomes. Indeed, a major rationale for the Armenian-Iranian railway was to subvert the blockade of Armenia while simultaneously reducing its dependence on Russia. This reasoning also explains why the United States was not opposed to the construction of a rail line linking its regional adversary Iran with Armenia, which is home to Russian military bases (see EDM, January 30).

The second basis for Russia’s indifference is the fact that the choice of the Azerbaijani route over the Armenian-Iranian railway will seriously undermine Yerevan’s attempts to build closer relations with Tehran independent of Moscow. It will also prevent Armenia from developing stronger transport connectivity with Europe as well as Georgia. As noted above, the Armenian-Iranian route would have continued northward into Georgia, which is politically at odds with Russia (Jam-news.net, February 28).

Third, at a cost of around $3.5 billion, the South Armenian Railway is not commercially viable (Newsarmenia.am, October 31). This sum is close to Armenia’s entire state budget. Yerevan has no prospects to finance the Iranian-Armenian railway on its own, while Baku has agreed to fund the $500 million still needed for the completion of the missing railway segment of the NSTC. In 2015, the president of Russian Railways made it clear that Moscow was not interested in the South Armenian Railway project, calling it “commercially unviable” (Azatutyun.am, June 9, 2015; Arka.am, January 19, 2016).

Russia’s current position on the business sense of building the South Armenian Railway sharply contradicts its policy from years earlier—before Armenia was as closely tied (politically and economically) to Russia as it is today. Back in 2008, Moscow had in fact assured Yerevan that it would participate in the implementation of the Iranian-Armenian rail link (Asbarez.com, November 14, 2008). At that time, the Russian Railways company took over Armenian Railways in a 30-year deal, which is extendable by another 20 years. Moreover, the proposed railroad was apparently on the agenda of the Armenian and Russian presidents’ Moscow meeting on September 3, 2013. Right after this, President Serzh Sargsyan announced Armenia’s decision to abandon the association agreement being negotiated with the European Union and declared his country’s intention to join the Russia-led Eurasian Economic Union (News.am, September 3, 2013; Arovat-ru.am, February 27, 2016; Jam-news.net, March 13, 2017).

Fourth, by supporting the Azerbaijani route, Moscow also aims to neutralize Chinese intentions to help fund the Iranian-Armenian railway to serve the One Belt, One Road project (Armenpress.am, November 16, 2015). The South Armenian Railway and China’s involvement in bringing it to fruition would have pulled Armenia out of Russia’s exclusive control. President Sargsyan had publicly stated that this project would lead to a stronger Chinese presence in the South Caucasus, something Moscow obviously would not like to see.

Last but not least, the Azerbaijani route will provide Russia with faster, easier and cheaper direct railway access to Iran as well as an overland passage to the Gulf and the Middle East. Due to Russia’s role in the Syrian conflict, burgeoning partnership and trade with Iran, and rising relations with Iraq, this railway connection can serve Moscow’s interest to project power into the region. Indeed, Russia’s attempted involvement in the recent Qatari-Saudi rift illustrates that Moscow is seeking a stronger presence in the Gulf region (see EDM, June 12). Iran’s Bandar Abbas port—the other end of the NSTC link—provides easier passage to Qatar and other Gulf countries for Russian goods.

Many in Armenia feel betrayed by Russia due to the effective failure of the Iranian-Armenian railway project. Yerevan has repeatedly counted on Moscow’s political support or economic backing for various regional initiatives, only to be disappointed. Ultimately, it seems, Armenia is simply too small to sacrifice Russian interests for (see EDM, April 14, 2016; February 13, 2017). This disconnect, however, has yet to fully register for the Armenian ruling elite (see EDM, July 27, September 8). And the reality is, Yerevan’s stubbornness on the Karabakh conflict has made the economy of Armenia and the prosperity of its people hostage to unrealistic ambitions for more than 25 years.