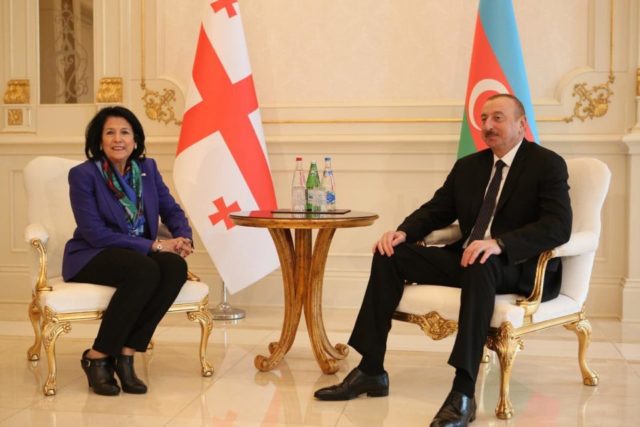 Speaker of the Georgian Parliament Irakli Kobakhidze visited Baku, Azerbaijan, on June 20. While meeting with his Azerbaijani counterpart, Ogtay Asadov, the latter noted that Azerbaijan as well as Georgia suffer from separatism and territorial losses, which obstruct their political-economic progress; otherwise, the Baku-based lawmaker argued, both countries could develop faster (Report.az, Ona.az, June 20). Yet, the implicit jab at Russia (which is responsible for or at least contributes to maintaining the status quo of the region’s so-called “frozen conflicts”) could not entirely obscure the current turbulence in Azerbaijani-Georgian relations.

The latest difficulties along the Baku-Tbilisi axis have developed despite the recent history of a successful and sustainable partnership built upon shared national interests and interdependence (Times.az, July 5, 2017). But clearly, serious vulnerabilities to this partnership were never fully dealt with, and they have now begun to spoil relations. Indeed, Azerbaijan and Georgia have been blaming each other over sharp tensions around the disputed Keshkichidag/Davit Gareja monastery complex. And earlier this year, the erection of a monument in a Georgian village populated by ethnic Armenians to an Armenian soldier and Karabakh war “hero” who fought against Azerbaijan caused a serious uproar in Baku. Meanwhile, Georgia has resented being left out of an Azerbaijani-Russian-Turkish side deal regarding the Baku–Tbilisi–Kars Railroad. And at the same time, Tbilisi’s intention to concede to opening a new transport corridor connecting Russia to Armenia is absolutely unwelcome in Baku. Such controversies create mistrust, which not only harms Azerbaijani and Georgian interests but also serves the agendas of their adversaries (see EDM February 7, May 14, 16,  June 6; Isdp.eu, September 2013).

Azerbaijan claims a leadership role in the South Caucasus region, and, as a result, all actors are likely to look to Baku to lead the way in addressing the problems inherent in the bilateral partnership with Georgia. But recent troubles have demonstrated that Azerbaijan cannot rely solely on joint energy and infrastructure projects to buttress the bilateral relationship (see EDM, March 7). Second, it has become apparent that Azerbaijan’s soft power is not particularly effective vis-à-vis Georgia, in spite of state oil firm SOCAR’s numerous social responsibility projects there or the presence of a large Azerbaijani community in Georgia.

Georgian society is largely ignorant of Azerbaijan’s positions on controversial issues. For instance, there was limited understanding in Georgia that the above-mentioned monument incident, combined with emotional statements from Tbilisi, would contribute to triggering the later border conflict at Keshkichidag/Davit Gareja. And the Georgian side consequently misread Azerbaijan’s approach toward the monastery, which was based on a presumption of shared use of the historic site (Oc-media.org, April 30; Contact.az, May 10; Jam-news.net, May 13; Apsny.ge, May 30; Trend, March 12, 2007).

On the other hand, Baku can learn something useful from Georgia regarding the latter’s initiatives such as the Poti deep-water port expansion and/or Anaklia port projects, which are almost absent in public discourse in Azerbaijan. At the same time, Georgia, not Azerbaijan, seems to have taken a leading role in promoting the long-proposed trans-Caspian natural gas pipeline project (TCGP) (GagraInstitute.org, May, Petroleum-economist.com, June 6).

While both are transit countries, Georgia is in a better position than Azerbaijan to take advantage of the added value that comes from goods crossing its territory. First of all, Georgia is a member of the World Trade Organization (WTO) and has signed free trade agreements with the European Union and China; as such, Georgia could potentially develop its manufacturing sector using Chinese parts and then export “Made in Georgia” products to Europe and elsewhere. Both the TCGP and its deep-sea port development projects would serve Georgia’s geo-economic vision by providing cheaper gas and lower shipping costs, respectively. Azerbaijan, in contrast, is missing such an opportunity due to its prolonged WTO accession negotiations in the name of protecting domestic producers; furthermore, energy still makes up well over 90 percent of the country’s exports (Worldstopexports.com, June 4, 2019; Turan.az June 28, 2019; Caspianbarrel.org December 17, 2018; Cesd.az, November 2014; Ada.edu.az February 15, 2010).

Last but not least, Azerbaijan has so far failed to actively work and engage with wider Georgian society and institutions at various levels while it waits for Georgia’s de facto leader Bidzina Ivanishvili to leave the political stage. Baku has wishfully hoped that former Georgian president Mikheil Saakashvili or another like-minded figure might return to lead Georgia. Indeed, the Saakashvili era can be regarded as a kind of honeymoon period between the two regional neighbors (Turan.az  October 29, 2018; President.az, February 17, 2013; Azernews.az, May 27, 2013; YouTubeMarch 7, 2012; Asbarez.com, August 4, 2011). But at least in Tbilisi, individual leaders are becoming less and less crucial and are “here today, but gone tomorrow” due to the evolving nature of Georgia’s domestic political system—in contrast to Azerbaijan’s (Bakuresearchinstitute.org February 19, 2019). The recent resignation of the Georgian speaker of parliament and the government’s concessions to civil society regarding a return to a proportional electoral system are cases in point (see EDM June 24).

Georgia’s approach to relations with Azerbaijan is clear: Tbilisi wants to uphold its strategic partnership with Baku while simultaneously reducing its overdependence on Azerbaijan (Nezavisimaya Gazeta, February 26, 2019; Sputnik.az, January 6, 2016; BBC—Azerbaijani service, February 11, 2014). It is certainly normal for a country to seek to reduce its dependence on another power. And that is exactly what Azerbaijan itself is proudly doing. Speaking at the Atlantic Council, in Washington, DC, last month, Azerbaijani presidential aide on foreign policy, Hikmet Hajiyev, passionately formulated his country’s foreign policy as the “4 Ms”—multi-vectorism, multilateralism, multi-regionalism and multiculturalism (YouTube,  June 11).

But Azerbaijan has failed to update its strategic vision toward Georgia. Policymakers and the leadership in Baku appear to be over-relying on the existing bilateral partnership, hence failing to tackle problematic issues in a timely and proper manner. One likely reason for this is the lack of qualified analysis coming from the Azerbaijani expert communities and thank tanks. For various reasons, Azerbaijani experts possess abundant details and data about Georgia; however, this translates into a “data rich but information poor” syndrome, characterized by “analysis paralysis.”

As a result, Azerbaijan overconfidently and overwhelmingly relies on large-scale transportation and energy projects along with SOCAR’s investments in Georgia as guarantees for the bilateral partnership. Meanwhile, Baku tends to ignore other factors—especially the necessity to diversify the basis of the relationship. It is high time for both the Azerbaijani authorities and experts to stop glamorizing the past and instead start tackling the Azerbaijani-Georgian partnership’s most challenging contemporary question: What next?