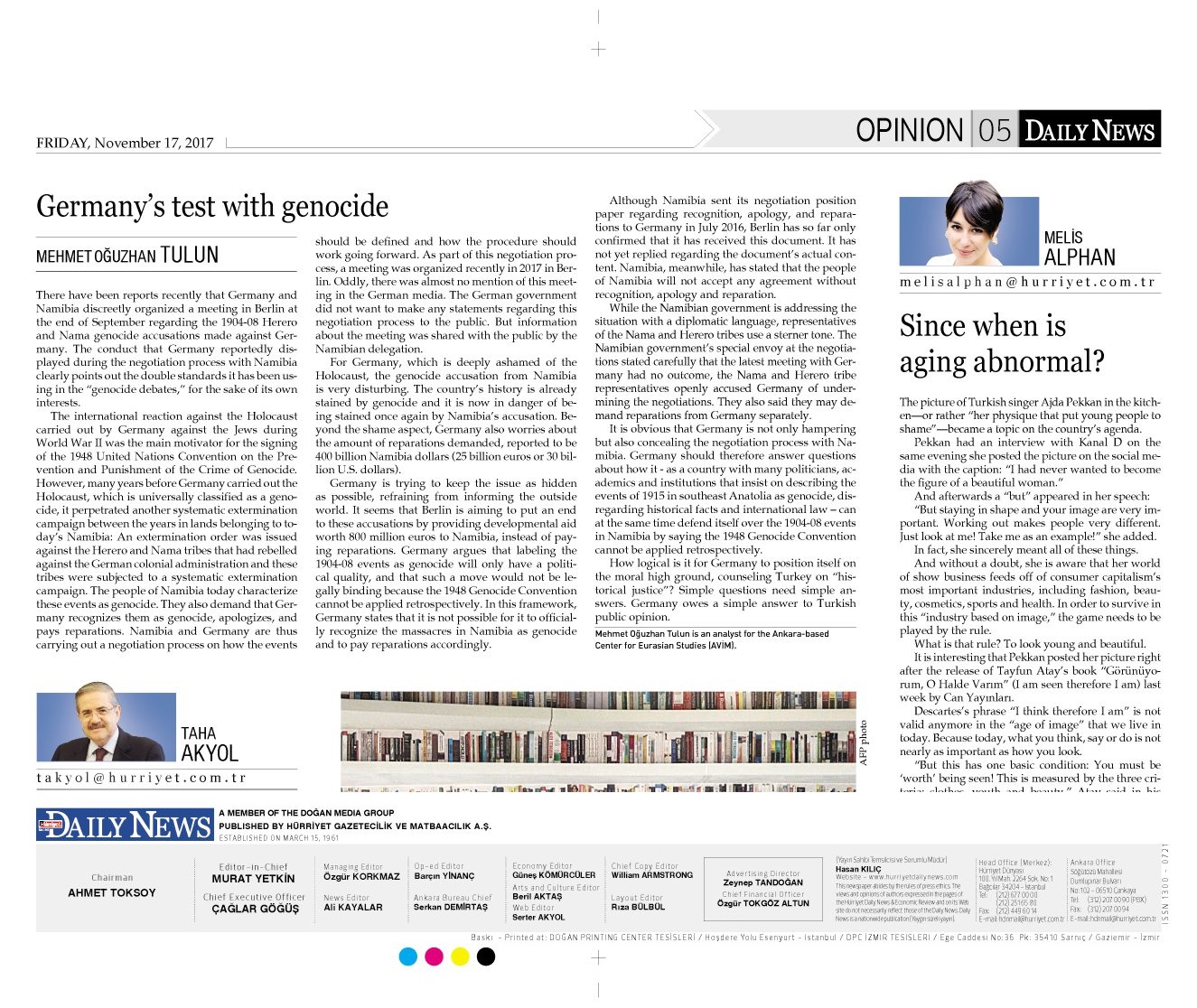 There have been reports recently that Germany and Namibia discreetly organized a meeting in Berlin at the end of September regarding the 1904-08 Herero and Nama genocide accusations made against Germany. The conduct Germany reportedly displayed during the negotiation process with Namibia clearly points out the double standards it has been using in the “genocide debates,” for the sake of its own interests.

The international reaction against the Holocaust carried out by Germany against the Jews during World War II was the main motivator for the signing of the 1948 United Nations Convention on the Prevention and Punishment of the Crime of Genocide. However, many years before Germany carried out the Holocaust, which is universally classified as a genocide, it perpetrated another systematic extermination campaign between the years [1904-1908] in lands belonging to today’s Namibia: An extermination order was issued against the Herero and Nama tribes that had rebelled against the German colonial administration and these tribes were subjected to a systematic extermination campaign. The people of Namibia today characterize these events as genocide. They also demand that Germany recognizes them as genocide, apologizes, and pays reparations. Namibia and Germany are thus carrying out a negotiation process on how the events should be defined and how the procedure should work going forward. As a part of this negotiation process, a meeting was organized recently in 2017 in Berlin. Oddly, there was almost no mention of this meeting in the German media. The German government did not want to make any statements regarding this negotiation process to the public. But information about the meeting was shared with the public by the Namibian delegation.

For Germany, which is deeply ashamed of the Holocaust, the genocide accusation from Namibia is very disturbing. The country’s history is already stained by genocide and it is now in danger of being stained once again by Namibia’s accusation. Beyond the shame aspect, Germany also worries about the amount of reparations demanded, reported to be 400 billion Namibia dollars (25 billion euros or 30 billion U.S. dollars).

Germany is trying to keep the issue as hidden as possible, refraining from informing the outside world. It seems that Berlin is aiming to end these accusations by providing developmental aid the worth 800 million euros to Namibia, instead of paying reparations. Germany argues that labeling the 1904-08 events as genocide will only have a political quality, and that such a move would not be legally binding because the 1948 Genocide Convention cannot be applied retrospectively. In this framework, Germany states that it is not possible for it to officially recognize the massacres in Namibia as a genocide and to pay reparations accordingly.

Although Namibia sent its negotiation position paper regarding recognition, apology, and reparations to Germany in July 2016, Berlin has so far only confirmed that it has received this document. It has not yet replied regarding the document’s actual content. Namibia, meanwhile, has stated that the people of Namibia will not accept any agreement without recognition, apology, and reparation.

While the Namibian government is addressing the situation with a diplomatic language, representatives of the Nama and Herero tribes use a sterner tone. The Namibian government’s special envoy at the negotiations stated carefully that the latest meeting with Germany had no outcome, the Nama and Herero tribe representatives openly accused Germany of undermining the negotiations. They also said they may demand reparations from Germany separately.

It is obvious that Germany is not only hampering but also concealing the negotiation process with Namibia. Germany should therefore answer questions about how it -as a country with many politicians, academics, and institutions that insist on describing the events of 1915 in southeast Anatolia as genocide, disregarding historical facts and international law- can at the same time defend itself over the 1904-08 events in Namibia by saying the 1948 Genocide Convention cannot be applied retrospectively.

How logical is it for Germany to attempt to position itself on the moral high ground, counseling Turkey on "historical justice"? Simple questions need simple answers. Germany owes a simple answer to Turkish public opinion.

Mehmet Oğuzhan Tulun is an analyst for the Ankara-based Center for Eurasian Studies (AViM).