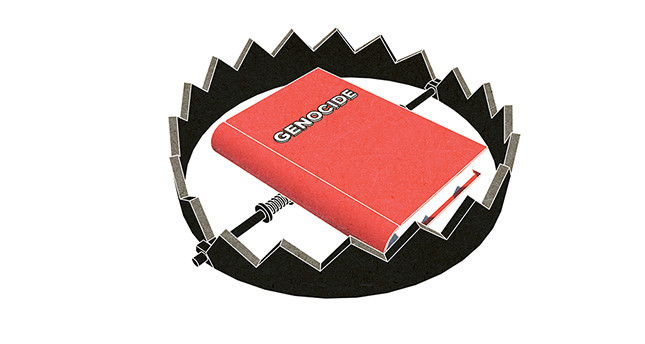 As Taner Akçam became the most cited reference of mainstream Armenian groups, his use of sources to justify calling the 1915 incidents genocide should be double-checked. This is a response to his last defense of the testimony of Sarkis Torossian and his more recent discovery of a document supposedly proving the Ottoman government's genocidal intentions.

A sociologist dealing with historical issues, particularly Ottoman Armenians, Taner Akçam has faced increasing criticism during the past decade. He never answered the critiques, including mine in Daily Sabah on March 25, 2015 of his use of Ottoman documents, such as the telegram sent by Interior Minister Talaat Pasha on Aug. 29, 1915, a document forbidding violence against Armenians and yet presented by Akçam as excellent evidence of genocidal intent against them.

In the Journal of Genocide Research, last winter (Vol. 19, No. 2, p. 277), he unexpectedly and indirectly answered the article I had published in Daily Sabah on Oct. 2, 2015, on his favorite witness for 1915, Sarkis Torossian, a self-described veteran of the Ottoman, British and French armies. Akçam now admits that the French certificate of decoration is, problematic, which is a considerable understatement, but he remains silent on the absurdities I found in the book and on the absence of any Torossian in the lists of officers of the Armenian Legion. Akçam, who cannot read French, changed the subject in mentioning the photograph of Torossian "wearing a French-Armenian voluntary unit uniform" that is published in Torossian's book, and another one, the English translation, "Evereg-Fenesse: its Armenian history and tradition," of a study, "Hishatakaran Evereek-Feneesei / Hawakets," printed in Armenian in Paris in 1963. Ayhan Aktar followed Akçam once again.

Yet, Torossian is not wearing the same uniform in these two pictures. For example, the decorations visible in his own book disappear in the other one. Beside this discrepancy, there is no date and no recognizable building in these photographs, yet anybody could buy or rent uniforms of the Armenian Legion in the U.S. during the 1920s, because many of its member were from America and went back home after the unit was disbanded in September 1920. So these pictures prove nothing except the lack of care of those who use them as evidence.

More recently, Akçam claimed to have found the smoking gun he has been looking for 25 years: An implicit admittance that the authentic telegram sent by Talaat Pasha on Aug. 29, 1915 is no evidence for genocidal intent. It is a telegram attributed to B. Şakir, a leader of the Committee for Union and Progress (CUP), in power from 1913 to 1918, and was supposedly sent to the governor of Mamüret-ül Aziz, modern-day Elazığ.

Contrary to what The New York Times published on April 22, 2017, it is hardly a new argument. It was previously used by Arthur Beylerian in 1983, Gerard Libaridian in 1984, Vahakn N. Dadrian in 1994 in facsimile, Yves Ternon in 1996 and Akçam himself in 2006 and 2008. Moreover, even if the telegram is authentic, and we will see that this is not the case, it cannot be presented as evidence of genocidal intent. Indeed, the text asks about the fate of the Armenians and separately requests information about the elimination or not of "the dangerous persons," Armenians in general and "dangerous persons" in particular not being confused in the text.

NOT A FACT-BASED DOCUMENT

Extrapolation, a method recurrently used in the mainstream publications supporting the Armenian genocide label, is not the only problem. What Akçam showed us is actually not a document but a mediocre photograph. The original, if it actually exists, is in the archives of the Armenian Patriarchate in Jerusalem, and Akçam himself not been allowed to work there. He never faced serious difficulties to work in the Ottoman archives for more than 10 years. Such a basic issue is alluded to in his presentation of the document.

Yet, any serious historian should consider the impossibility to access the original to be both a fundamental problem and a reason to be even more careful in the verification of its authenticity. Regardless, Akçam and his supporters have never explained, at least for the moment, how B. Şakir, who left his position in the Special Organization (SO), an elite unit of the Ottoman army, on June 19, 1915, could have signed a document with the title of a SO leader on July 4, 1915, the date of the alleged telegram: see Ahmet Tetik, "Teşkilat-ı Mahsusa (Umûr-ı Şarkıyye Dairesi) Tarihi: 1914-1916," (İstanbul, Türkiye İş Bankası Kültür Yayınları, 2014, p. 316).

More fundamentally, the telegram was used in the trial in absentia of Şakir, so it has to be understood in the more general context of the trials of CUP leaders and officials in 1919-1920, during the occupation of Istanbul along with the impossibility of being assisted by a lawyer during the investigation, suppression of the right to appeal the sentences, absence of cross-examination of the witnesses and documents produced by the prosecutor. About Şakir in particular, W. S. Edmonds, a diplomat working at the Eastern Department of the British Foreign Office, wrote on March 9, 1920, that his sentence did not mean anything, because if Şakir went back to Istanbul, he would have the right to ask for a new trial (The National Archives, Kew Gardens, FO 371/5089/E 949, f° 84). Even more remarkably, Col. Süleyman Şakir, one of the judges of the court martial that sentenced B. Şakir, wrote a report concluding that there was no witness or intelligence to corroborate the accusations against him. Similarly, the photograph shows us the deciphered version of the telegram. As a result, it should be on the regular paper of the Ottoman administration of Posts, Telegraphs and Telephones. This is not the case. Problems were raised on the website of the Center for Eurasian Studies (AVIM) by a young historian, Sean Patrick Smyth.

That interesting analysis, however, does not exhaust the issue. In particular, Akçam has to tell us why the telegram was not used by British authorities and their Armenian and Greek assistants during the investigation conducted into 144 former Ottoman officials arrested and interned on Malta from 1919 to 1921. On Aug. 24, 1921, Judge Lindsay Smith concluded that the investigation was a complete failure and that a trial ending with a general acquittal would hardly improve the prestige of the Crown. As a result, he suggested an exchange of prisoners with the Kemalists (FO 371/6504/E 10023). Is it imaginable that a smoking gun, as Akçam alleges, could have been missed by the British authorities who occupied Istanbul from the end of 1918 to 1923? On the contrary, Ottoman documents actually found by the British have been published in Salahi Sonyel's "The Displacement of Armenians. Documents" (Ankara: TTK, 1978, and can be checked in FO 371/9158). Their content is a clear refutation of the accusation of an Armenian genocide and they show an Ottoman cabinet concerned about the fate of the relocated Armenians, giving orders to take care of them.

The implementation of these orders is another confirmation that there is no smoking gun at all. Indeed, in the province of Elazığ to which Şakir allegedly sent his telegram, 224 Muslims were sentenced for crimes against Armenians. These sentences were pronounced between October 1915 and January 1917, namely when the CUP was still in power and should not be confused with the unfair trials of 1919-1920, organized by an anti-CUP cabinet (Kamuran Gürün, "The Armenian File", London-Nicosia-İstanbul: K. Rüstem & Bro/Weidenfeld & Nicolson, 1985, p. 213). Among these 224 people sentenced as a result of the CUP cabinet's orders, noteworthy is Ali Cemalzade Hüseyinoğlu, who was in charge of a convoy of relocated Armenians in Palu, close to Elazığ, who received a prison sentence (Yusuf Sarınay, "The Relocations (Tehcir) of Armenians and the Trials of 1915–16," Middle East Critique, Vol. 20, No. 3, 2011, p. 311).

As a result, it is clear that neither the formal aspect of this telegram nor the existing record corroborate the smoking gun theory. About this document, like Torossian's testimony and many other sources, Akçam recycles discredited material.