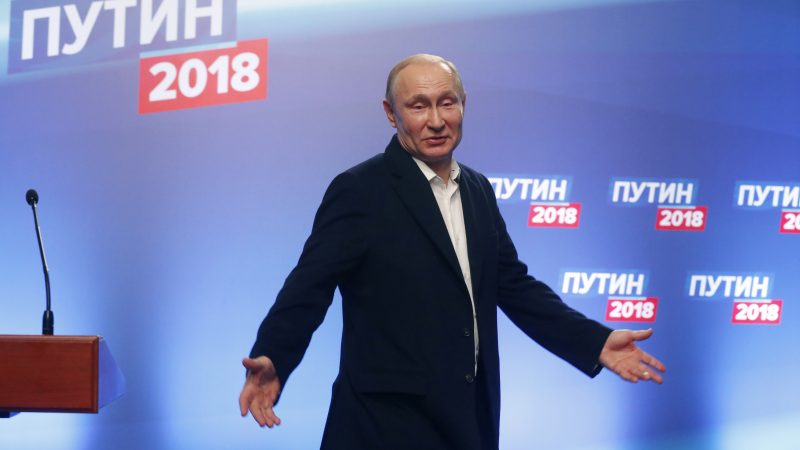 The 2018 Russian presidential elections on March 18 resulted in an overwhelming victory for Vladimir Putin, who won 76 percent of the votes. The opposition’s hope for low voter turnout to cast doubt on the legitimacy of the elections reached nowhere, as the voter turnout was declared to be at 64 percent. The fact that the presidential candidate who came second after Putin won 7.1 percent of the votes shows Putin is pretty much an uncontested politician. On the whole, the recent presidential election in Russia disclosed that in the present, Putin’s power and hegemony in Russia is unchallenged.

Putin appeared in Russia’s political scene at a time of severe economic troubles, coupled with a widespread disillusionment with President Boris Yeltsin’s foreign policy, which was perceived by a large portion of the Russian society as humiliating vis-à-vis the West. The ineffectiveness of the Russian army to suppress a rebellion in Chechnya was also a major reason for the Russians to be embarrassed. Putin, a former KGB officer, first gained reputation as a determined leader who suppressed the Chechens by taking brutal measures. His purge of the oligarchs in Russia made him gain further popularity. The increase in oil prices helped him recover the Russian economy, subsequently leading to a rise in living standards. All these made Putin a strong and capable leader that the Russian people had been longing for.

During 2008 and 2012, Dmitri Medvedev was the president of the Russian Federation, but the strings of the country were still being pulled by Putin. During the last year of Medvedev’s presidency, pro-democracy mass demonstrations marked the political scene in Russia. When Putin once again became president in 2012, he advanced a crackdown onto this popular movement, stigmatizing it as a Western-led conspiracy. In such a context, Putin began to voice a new ideology that he defined as conservatism against the “degenerate values of Western liberalism.” In fact it was during this period Russia began to explicitly define itself as the guardian of the “traditional values” against the corrupt liberal Western culture, as well as the pioneer of multi-polarity against the “U.S.-led unilateral globalism.” Doing that, Russia sought to form blocs and partnerships with non-Western countries such as China. In brief, starting from 2011-2012 Russia began envisioning itself as an unyielding power and the leader of an alternative global order and an alternative civilization defined by conservatism.

What does Putin’s overwhelming power and hegemony in Russia tell us?

We can readily claim that Putin’s success in recovering the Russian economy and raising the living standards in Russia had been a key factor behind the overwhelming support he got from the Russians. And besides the economy, it can be seen that Putin’s assertive foreign policy appeals to the Russian people. Indeed, it is not a coincidence that only 17 days before the election Putin announced Russia’s newly developed nuclear arsenal, which, he claimed, Russia would not hesitate to use in the event of a threat. It seems that for the majority of Russians, who were depressed by the economic conditions and some sort of a psychological distress for the loss of the great power status, Putin came to symbolize the hope to return to the old glorious days of the mighty Tsarist Russia and the Soviet Union. In fact, with Putin as a strong and assertive leader, the recently popularized conservative ideology and the image of Russia as the defender of the “traditional values” in contrast to the “Western liberalism” fit well to the wants of the Russians to re-gain their status of being a great power.

*Turgut Kerem Tuncel is a senior analyst at the Center for Eurasian Studies (AVİM).