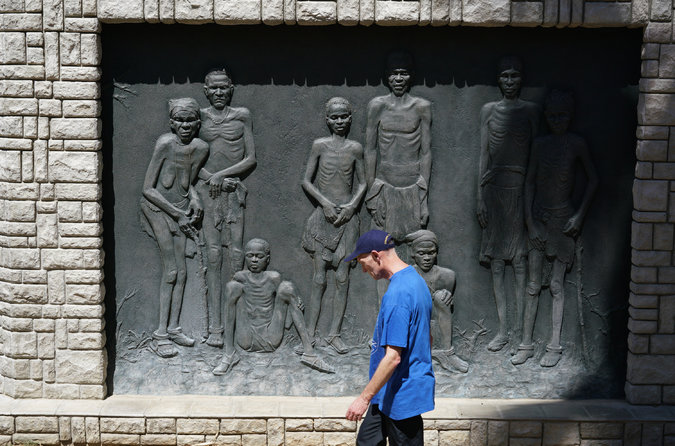 More than 100 years after a genocide of the Herero people in Namibia, Germany is acknowledging its role.

In this faraway corner of southern Africa, scores of German soldiers lie in a military cemetery, their names, dates and details engraved on separate polished tombstones.

Easily missed is a single small plaque on the cemetery wall that gives a nod in German to the African “warriors” who died in the fighting as well. Nameless, they are among the tens of thousands of Africans killed in what historians have long considered — and what the German government is now close to recognizing — as the 20th century’s first genocide.

A century after losing its colonial possessions in Africa, Germany and its former colony, Namibia, are now engaged in intense negotiations to put an end to one of the ugliest chapters of Europe’s past in Africa.

During German rule in Namibia, called South-West Africa back then, colonial officers studying eugenics developed ideas on racial purity, and their forces tried to exterminate two rebellious ethnic groups, the Herero and Nama, some of them in concentration camps.

“It will be described as genocide,” Ruprecht Polenz, Germany’s special envoy to the talks, said of a joint statement that the two governments are preparing. Negotiations, which began this year, are now also focusing on how Germany will compensate and apologize to Namibia.

The events in Namibia between 1904 and 1908 foreshadowed Nazi ideology and the Holocaust. Yet the genocide in this former colony remains little known in Germany, the rest of Africa and, to some extent, even in Namibia itself.

Throughout Namibia, monuments and cemeteries commemorating the German occupiers still outnumber those honoring the victims of genocide, a concrete reminder of the lasting imbalance of power.

“Some of us want to remove that cemetery so that we can put our own people there,” said Magic Urika, 26, who lives about an hour away from the cemetery here in Waterberg. “What they did was a terrible thing, killing our people, saying all the Herero should be eliminated.”

While Germany’s efforts to atone for crimes during World War II are well known, it took a century before the nation began taking steps to acknowledge that genocide happened in Namibia decades before the Holocaust.

About 80 percent of all Herero, who numbered as many as 100,000, are believed to have eventually died. Many perished after the battle of Waterberg: They were shot, hanged from trees or died in the desert, where the Germans sealed off watering holes and also prevented survivors from returning.

Even after the centennial of the Namibian genocide in 2004, Germany’s willingness to acknowledge it officially has proceeded so slowly — and, to critics, grudgingly — that it has set off accusations of racism in how the victims in Europe and Africa have been treated.

“The only difference is that the Jewish are white in color and we are black,” said Sam Kambazembi, 51, a traditional Herero chief whose great-grandparents fled during the genocide. “The Germans thought they could keep this issue under the carpet and the world would never know about it. But now we have made noise.”

But Mr. Kambazembi and other leaders are also quick to blame domestic politics for the delay in recognition.

After Germany lost its African colonies during World War I, Namibia slipped under the control of South Africa’s white-minority government until 1990, largely making talk of the genocide taboo.

After independence, Namibia’s liberation party — South West Africa People’s Organization, or Swapo — took over and governs to this day. But it is dominated by the country’s main ethnic group, the Ovambo, and critics contend that it showed little interest in bringing up the genocide against the Herero and Nama.

The Swapo-led government has also depended greatly on foreign aid, especially from its biggest donor, Germany.

For years, Mr. Kambazembi, a longtime member of Swapo, said he had unsuccessfully pressed fellow party leaders to emphasize the genocide issue.

“They make as if they listen, but then maybe when they go, they say, ‘That one is a Herero’ — I don’t know,” he said.

Namibia was Germany’s most prized African colony, the one that attracted thousands of German settlers, who grabbed land and cattle from local residents.

That drew fierce resistance from the Herero, traditional cattle herders, and the Nama. To quell it, Lothar von Trotha, a military commander who had earned a fierce reputation in Germany’s possessions in Asia and East Africa, was deployed to Namibia to lead the “Schutztruppe,” or protection force.

In 1904, he issued a warning that “every Herero, with or without rifles, with or without cattle, will be shot.” He said he would no longer take in women or children, but “drive them back to their people or have them shot.”

Stories of the deaths in the desert were passed down quietly in Herero families — usually around a fire at night.

Marama Kavita, 43, a Herero activist in Okakarara, a town about an hour from Waterberg, said he heard stories from his grandmother, who fled to what is now Botswana as a child during the genocide.

“Whenever I asked her about this, she always said a word or two, and then started crying,” he said. “If you would see an old lady like that crying, it also transferred to you that emotion, the hatred.”

Over the decades, Nama communities also kept alive the memories of the genocide in cultural festivals, handing down songs about the war and re-enacting wartime episodes, said Memory Biwa, a researcher at the University of Namibia who has compiled an oral history of the genocide.

In Hoachanas, a desolate Nama town in central Namibia, memories center on the concentration camp in Windhoek, the capital, where many of the residents’ ancestors were taken.

“My grandfather used to tell me how they were kept in a sort of kraal,” said Timotheus Dausab, 79, using the word for an enclosure for animals. “Some came back, but many died there. My grandfather used to tell me how cruel the Germans were. When he told us those stories, he would jump up and stand straight, very aggressively. His face would get angry.”

Petrus Kooper, Hoachanas’s traditional chief, said that the loss of lives, property and land during the genocide were still being felt in his community, where there are no paved roads and many people live in shacks.

“It is because of those wars that we live like this on this barren land,” he said.

In a potential obstacle to the talks, some Nama and Herero leaders want to negotiate directly with Germany for compensation. The Namibian government, they say, will spread future money from the Germans to unaffected ethnic groups or, worse, simply pocket it.

“We don’t trust our own government to negotiate on our behalf,” said Ester Muinjangue, chairwoman of the Ovaherero Genocide Foundation.

Namibia’s special envoy to the genocide talks, Zed Ngavirue, said that Herero and Nama officials were already involved and would continue to be when Namibia receives compensation from the Germans.

“The method, the distribution will be done with the participation of the community themselves,” said Mr. Ngavirue, who is Herero.

But the two sides have yet to agree on a compensation amount, or what it should be called. Namibia speaks of reparations, but Germany rejects the term.

Reparations would amount to acknowledging guilt under the 1948 United Nations Convention on Genocide, the Germans say, adding that the convention cannot be applied retroactively to past genocides. That is also why Germany is refusing to negotiate directly with the Herero and the Nama, because discussions would fall under reparations, said Mr. Polenz, the German special envoy.

While Germany has directly paid victims of World War II in the past, compensating descendants in Namibia would subject Germany and other nations to an endless stream of new claims, Mr. Polenz said.

“Maybe even the United States would ask us now what to do with the Indians?” he said. “You cannot restart history. You cannot rewind time, not in your private life, not in public life.”

“There is still a colonial amnesia,” said Reinhart Koessler, a German historian and expert on Namibia.

In a visitors’ book at the Waterberg military cemetery, a German man from Oldenburg wrote in English: “It hurts me that this cynical memorial is left without an information about the genocide and with only a small notice of the killed Herero people.”