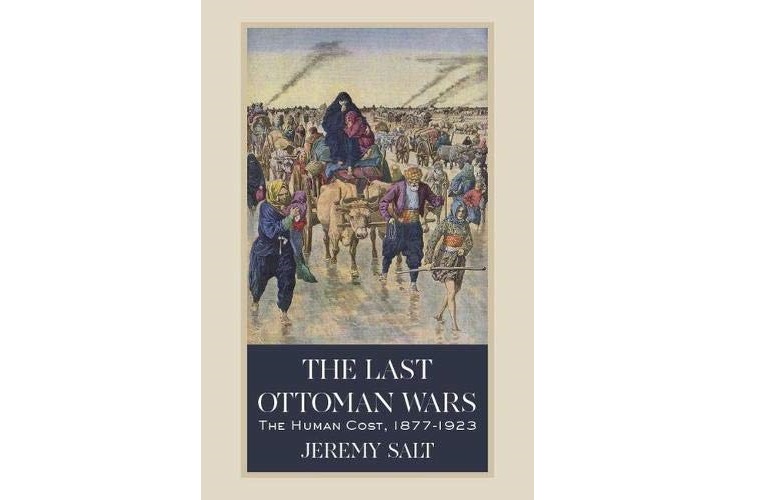 While Australia’s commemoration of the centenary of the First World War is now over, it behoves us to remember that, in Turkey’s case, the significant dates are 1911-23, rather than 1914-18. Jeremy Salt has written a compelling book that contextualises the experience of the Ottoman Empire in that conflict, the precursor to the emergence of modern Turkey.

From a Turkish perspective, the events of 1914-18 were part of a conflict that included Italy’s attack on Libya in 1911, the two Balkan wars of 1912-13, the Ottoman-Allied conflicts of 1914-18 (including Gallipoli, Mesopotamia, Palestine and the Russo-Ottoman front in northeastern Anatolia), and the war between Greece and the Turkish National Movement in 1921-22.

Salt goes back to the late 1870s in his analysis of the downfall of the Ottoman Empire. As the subtitle indicates, his emphasis is on the “human cost.” A major theme is to show the suffering endured by the Ottoman Muslims, but not at the expense of neglecting other groups who also suffered greatly. Salt has a passion for his subject but is also compassionate. His approach is very measured. He deals with some highly contentious subjects, where there are competing nationalist claims. He is not “post truth,” but uses a traditional historical methodology. This means using a variety of sources, indicating where biases might be involved (for example, if an author or report is promoting a political objective). Assessing sources on this basis enables the writer to come up with a “best estimate” of the losses  in the various conflicts.

Addressing himself to the general reader, Salt organises his book into four sections. Part I discusses “Late Ottoman Society,” outlining key elements of the Ottoman Empire, with particular reference to tensions between Kurds and Armenians in eastern Anatolia and the Russo-Ottoman war of 1877-78. Part II on “Balkan Crusades” covers the moves by Christian ethno-religious groups in the Balkans to eject the Ottomans from this region, the heartland of the Ottoman Empire. Section II also discusses the efforts at reform by the Young Turks, and the Italian invasion of Libya in 1911; it  culminates in two chapters on the Balkan Wars when Greece, Serbia, Bulgaria and Montenegro brought an end to the Ottoman domains in Europe, with Greece and Serbia subsequently falling out with Bulgaria over the division of the spoils.

Part III, “The Last Ottoman War,” covers 1914-18, including the military campaigns, which included Ottoman victories at Gallipoli in 1915 and Kut (Mesopotamia) in 1916 but failure elsewhere; there are also two chapters on the Armenian issue. Salt’s argument here is that the Ottoman government’s policy towards the Armenians was based on a perception of “military necessity,” comparable to the internment of Japanese-Americans during the Second World War, or the relocations of people during the Malayan Emergency, the Algerian War, and the Vietnam conflicts. While only a minority of Armenians engaged in violence (much of it against Kurds) or actively supported the Russians, the Ottoman authorities believed they had to act for defensive reasons. The immense loss of life (Salt estimates deaths of 600,000 out of an Ottoman Armenian population of 1.6 million) was due to the completely inadequate means for moving people from northeastern Anatolia to distant Syria, the main destination, as well as attacks on Armenians from Kurdish brigands; Salt points to the punishment (including executions) of Turks committing violence against Armenians.

While the Armenian issue clearly resonates still, with completely opposing interpretations, Part IV on “A Questionable Peace” is helpful also for giving the reader a better understanding of the background to Greek-Turkish tensions that have continued up to the present day. Initially the focus in this section is on the Ottoman success in advancing into Transcaucasia and capturing Baku (Azerbaijan) in early 1918, Russia essentially being a spent force in the aftermath of the Russian Revolution. However, this did not compensate for the Ottoman loss of Palestine and Syria to the advancing British (including Australian) forces under General Allenby. The Treaty of Sèvres with the Ottoman Empire in August 1920 was much more punitive than the Treaty of Versailles with Germany: Greece was allocated the region around Izmir (Smyrna); an Armenian state was to be created in northeastern Anatolia; zones of influence were assigned to France in southeastern Anatolia (Cilicia) and to Italy in the south; and the Straits connecting the Aegean and Black Seas were to be internationalized. The Turkish National Movement under Mustafa Kemal (Kemal Ataturk) arose to resist this settlement. War with Greece came about when Greece, supported by British Prime Minister David Lloyd George, attempted to occupy the region allocated to it under the Treaty of Sèvres. Following the Greek defeat, and with the British unwilling to intervene without broader backing, the way was cleared for revising Sèvres in the Treaty of Lausanne in 1923, leading also to the establishment of the Turkish Republic. Part of the settlement involved a transfer of Greeks from southwestern Anatolia to Greece, and of Turks from what was now northern Greece to Turkey –  this was an ethnic cleansing of people from regions inhabited by their forebears for centuries.

Salt’s overall argument is that the region affected by the “last Ottoman wars” was an ethnic mix. The Ottoman system gave autonomy to ethnoreligious groups to run their own institutions but did not claim to represent an Ottoman “nation.” The empire crumbled with the emergence of militant nationalisms whereby particular movements claimed that they should have a state based on their own ethno-religious group. In a situation of cultural heterogeneity, the consequence of acting on this claim was ethnic cleansing and forced assimilation, with large-scale suffering and violence. The Christian groups within the empire were often supported by external powers, the most significant of which was Russia. Other powers could oscillate in terms of whether they supported the Ottoman Christian groups or sought to prop up the “sick man of Europe.” Salt provides an insight into the dynamics of what happened, but one might ask why militant nationalism arose and developed in the first place, when clearly the Ottoman system of religio-cultural autonomy had much to commend it. The spread of nationalist ideas requires further study in this context.

The theme of suffering pervades this book. In reference to 1914-18, Chapter 11 on “A Land in Despair” is particularly graphic. Deaths from disease were much higher than actual combat deaths. Salt says there were over 3 million civilian deaths during the war, and another one million military deaths (p. 195). With over 4 million deaths in an Ottoman population of 18.5 million, this was the highest proportion for any of the combatant states. Allowing for the Armenian figures indicated above, it appears that at least three quarters of those who died were Muslims. Over the course of the conflicts between the 1820s and 1922, Salt refers to an estimate of 5.5 million Muslim deaths, with “upward of 5 million” turned into refugees (p. 196). In reference to the Balkan Wars of 1912-13, Salt cites figures from Justin McCarthy, the Ottoman historian and demographer, of 632,000 deaths, or 27 percent of the pre-1912 Ottoman Balkan population of 2.3 million non-Albanian Muslims (p. 162).

The conflicts covered in this book invoke intense nationalist arguments. Salt’s point is that there should be recognition that suffering was mutual, Muslim as well as Christian. It is only in that recognition that the way can be prepared for reconciliation (p. 321). Surveying the conflicts of the present that derive from the “last Ottoman wars,” this is a noble but elusive aspiration, but surely one worth striving for.

Professor Derek McDougall is a Professorial Fellow of the School of Social and Political Sciences at the University of Melbourne.