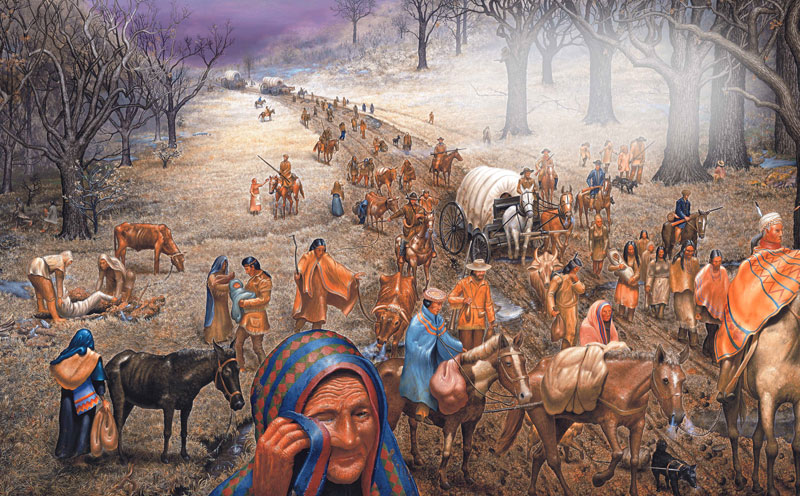 This is the English translation of a Turkish language article that was originally published by AVİM on 25 April 2022.

It may be seen as striking that such accusations are aimed at a country known as the cradle of democracy. However, one needs to accept that this evokes some facts. Here, the mentioning of genocide refers to the fate of the Native Americans, the indigenous people, while speaking of slavery refers to the African Americans, the people of African descent.

In this article, the subject will be dealt in terms of the Native Americans.

According to the viewpoint of the founding fathers of the United States, establishing the state that they envisioned required the seizure of the lands that the indigenous people were living on for centuries. This case necessitated the systemic eradication of the indigenous Native American population through various means to open space on the most fertile lands for the European immigrants.

There are no written documents regarding how high the population of indigenous people who were living on the continent was before the Discovery. To this day, only figures based on estimates have been put forth concerning the matter. Lastly, research conducted with the aim of explaining the reasons behind the 0,15 degrees Celsius drop in the global temperature during the 1600’s has also given striking results on the indigenous population before the Discovery. According to this research, prior to the arrival of the European settlers, the indigenous population residing on the continent was stated to be 60,5 million in an article published in the Quarterly Science Reviews journal’s February 2019 issue.

No matter how scientific and accurate the applied methods may be, the asserted numbers are open for discussion. The non-debatable aspect is the fact that, the Native American population dropped down to 270,000 by the 1900’s according to the official records.

The European colonists’ brutal behavior and extreme acts of violence against the Natives are what lie behind this stark reality. The friction and conflicts, which started from the beginning of the Discovery, persisted after the official establishment of the US in 1776 and an intensive period of war, also known as the American-Indian Wars, occurred. This period ended with the Natives losing their lands year by year. The foreigners conquered all the lands that they wanted. Through an enacted law, the Natives were ripped apart from the fertile lands where they had lived for centuries and forcibly displaced to regions thousands of kilometers away. Those who refused to go would be met with violence. During the “Trail of Tears” forced displacements, thousands of Natives lost their lives due to hunger, disease, and atrocious conditions of travel. The Natives, who lacked the immunity, were affected intensely by the epidemics and suffered heavy losses. The foreigners even considered utilizing the infectious diseases to annihilate the Natives. Access routes to foodstuffs were cut off so that it would lead to the Native population’s starvation. The sterilization of the Native women was a method applied for the systematic slaughter of the Natives. Moreover, the Native youth was subjected to a harsh assimilation.

To conclude, the white people of European origin never considered granting the right to live to the Natives and did not hesitate to take any action in order to decimate them. In other words, the annihilation of the Natives’ started when the European immigrants set foot on the American continent.

Below are some of the statements of the US statesmen, governors and soldiers of various status who supported this process.

- The most explicit and vulgar remark belongs to General Philip Sheridan, who viewed Native Americans in a biased manner and considered them as enemies throughout his life. In 1851, this General stated “The only good Indian is a dead Indian”.

- In order to carry out the punishment of the Iroquois tribe, which attacked the immigrants, President George Washington ordered in 1779 the dismantling and destruction of all settlements belonging to the Natives.

- In his proclamation during the early 1800s, concerning a tribe situated near Detroit refusing to leave their lands, President Thomas Jefferson said “If we are constrained to lift the hatchet against any tribe, we will never lay it down until that tribe is exterminated, or driven beyond the Mississippi. […] in war, they will kill some of us; we shall destroy them all.”.

- This explanation was printed in a 3 January 1890 issue of the Aberdeen Saturday Pioneer newspaper: “The Pioneer has before declared that our only safety depends on the total extermination of the Indians. Having wronged them for centuries, we had better, in order to protect our civilization, follow it up by one more wrong and wipe these untamed and untamable creatures from the face of the earth. In this lies future safety for our settlers and the soldiers who are under incompetent commands. Otherwise, we may expect future years to be as full of trouble with the redskins as those have been in the past.”. Three days after the Wounded Knee Massacre, the journalist and writer L. Frank Baum wrote the comment above. It is understood that there was a general acceptance towards these statements.

It is a fact that US officials make genocide accusations to other countries, if one considers the historical record of the US, in order to exonerate and purify themselves by imputing a human crime to others just like Germany does in an effort to dilute its well-known record.