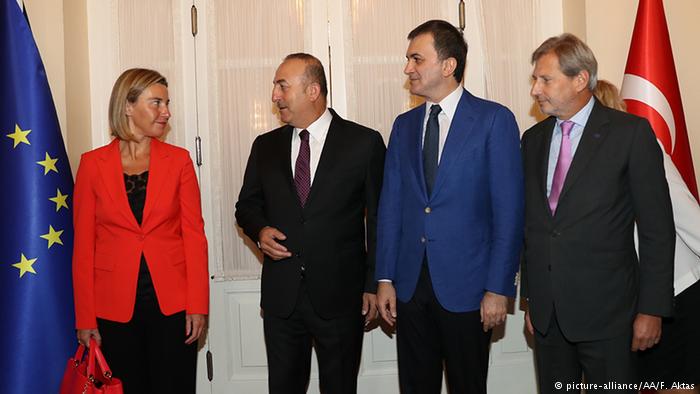 These attacks are mainly focused on two issues. The first issue is regarding the Balkans. Many actors in the EU argue that Turkey and Russia are meddling in the so–called "Western Balkans" region, a sub-division of the Balkans invented by EU member countries to marginalize Turkey from the rest of the Balkans and thus Europe. This invention creates a convenient excuse not to accept Turkey’s EU bid. According to this logic, Turkey and Russia are using their proxies, Albania and Serbia, to redraw the boundaries in the Balkans.

In their sense, Russia allegedly encourages Serbia for the annexation of territory from Bosnia-Herzegovina. The argument further elaborates that Turkey supports Albania so that it annexes Kosovo and territory from Macedonia to create a “Greater Albania”.

Certain analysts in prestigious newspapers have argued that the Balkan leaders have shown to the EU that if the EU is not willing to speed the EU accession process, they are willing to look to the East. More specifically, these Balkan countries are apparently willing to contribute to Russia’s and Turkey’s nationalistic agendas.

There are two important points that such articles omit. The first point they omit is the evidence supporting Turkey’s role in creating a crisis in the Balkans region. None of the articles that put forth Turkey’s role in Balkans as a crisis instigator provide any evidence to back up their claims regarding Turkey. Interestingly, they do put forth evidence for Russia, but not for Turkey.

Secondly, how can Turkey and Russia work at the same time to instigate a crisis in Balkans when these two countries’ goals are inherently and historically opposed to each other? For above-mentioned analysts, Russia is trying to create a larger Serbia while Turkey seems to be trying to create a larger Albania. None of the articles provide any explanation as to how these mutually exclusive goals exist at the same time.

The second issue is that the EU actors seem to be attempting to describe Turkey as a “NATO in Name Only” (NINO) country. The usage of this concept has begun to be slowly but steadily put into circulation against Turkey. One must ask what proof there is behind the usage of NINO against Turkey? Turkey is one of the few NATO members who almost meet NATO’s two percent defense spending criteria. EU members such as Germany, the biggest economy of the EU and one of biggest in the world, trails noticeably behind Turkey. If Germany is not being referred to as NINO, at a juncture where it defies sanctions against Russia, as well as voicing opposition to US designs, then why is Turkey being referred to as such? Furthermore, the Turkish armed forces have significantly more real-world combat experience than the German one. So, again, why is Turkey being branded as NINO? We could multiply such examples for Germany or other NATO members.

Apparently one of the reasons why Turkey seems to be accused as being NINO is because the Anadolu News Agency had disclosed some information about the whereabouts of the allied soldiers in the Middle East. Yet nobody seems to be concerned as to the lack of support for Turkey in the Middle East from its NATO allies. This inaction interestingly does not turn them into NINO. Once again, why?

In the last months, especially last six months, Turkey seems to have become a heavy bag for many EU actors. The act of defaming Turkey is easy because these actors, whether political or non-political, seem to pay little price for attacking Turkey. In fact, they seem to be gaining political dividends, particularly from the far right and racist extremists. Yet none of these actors, the elite and the thinkers of their societies, are thinking ahead. What will happen when the up coming elections are over? What happens when the politicians who occupy the seats today are gone? The words uttered, the seeds that have been sown will still grow.

Link to the where the article was originally published: http://www.hurriyetdailynews.com/the-heavy-bag-for-the-european-union-turkey.aspx?pageID=449&nID=116878&NewsCatID=396