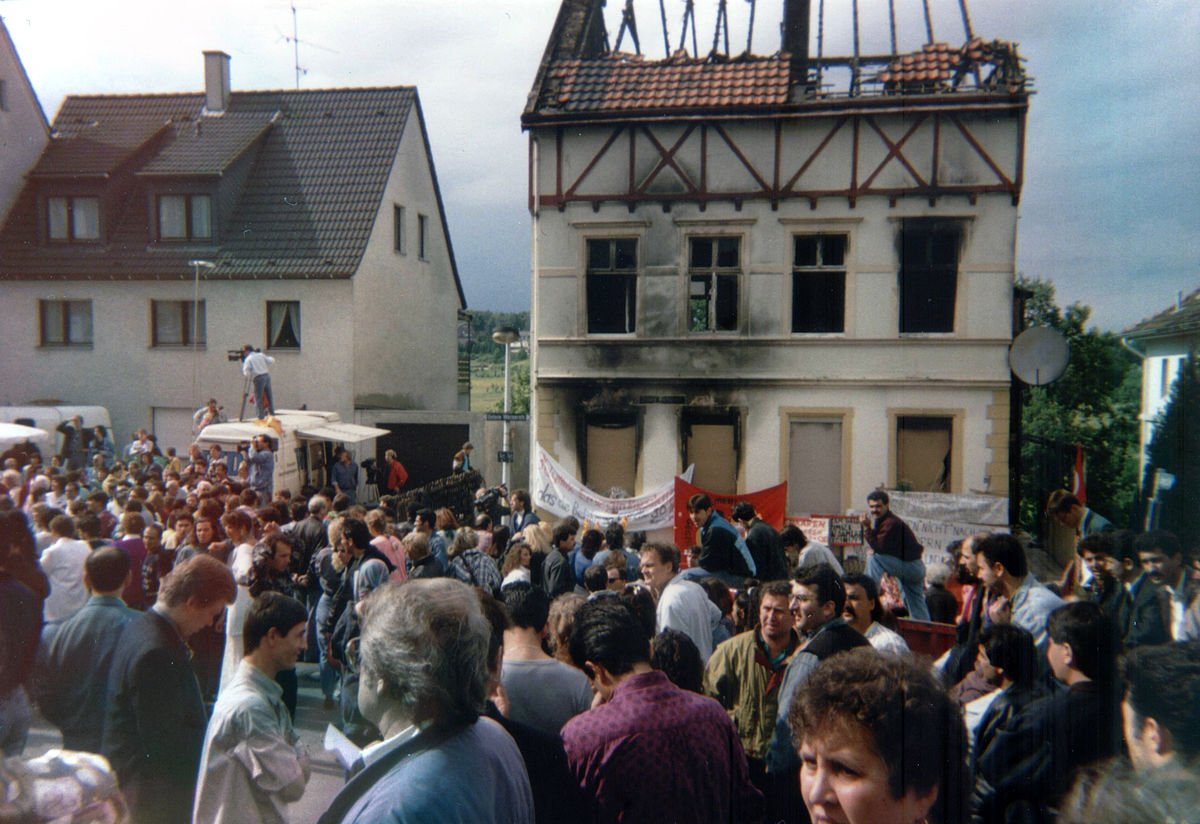 In the early 1990s, resentment toward foreigners led to physical assaults and arson attacks on foreigners in Germany. Such attacks took place in the cities Rostock-Lichtenhagen, Hoyerswerda, Frankfurt an der Oder, Magdeburg, Mölln, and Solingen. The Solingen arson attack is considered as one of the most severe instances of xenophobic violence in modern Germany. On the night of 28-29 May 1993, four young German men belonging to the far-right group with neo-Nazi ties, firebombed the house of a Turkish family in Solingen, resulting in the death of three children and two adults. Fourteen other family members, including several children were severely injured.

This attack led to protests by Turks in several German cities. Such crimes, which reminded Germans of the Nazi persecutions of the past, triggered nationwide protests. Vast crowds of Germans took a public stance against neo-Nazism and xenophobic violence. Thousands of Solingen residents condemned the attack and lamented it, and gathered to bid farewell to their murdered neighbors. According to a news report at the time, in his speech to the crowd at the gathering, Solingen Mayor Gerd Kraimer stated that they were deeply “horrified and ashamed” and asked for forgiveness.

German Chancellor at the time, Helmut Kohl, declined to appear at the memorial services. He also rejected appeals to attend the burial of the five victims in Turkey. Both in Solingen and at a larger demonstration in Cologne, demonstrators carried signs and shouted slogans aimed at Chancellor Kohl such as: “Mister Kohl, Shame on You.” In Cologne, Turkish youth hoisted a sign that demanded: “Helmut, Do Something! We Don't Want Another 1940.”

Unlike Chancellor Kohl, many dignitaries were present in Cologne for the memorial services. Among them were German President Richard von Weizsacker, President of Parliament, Governor of North Rhine-Westphalia, and Germany's foreign, interior, and labor ministers. President Von Weizsacker asserted that rightist terrorism in Germany was politically motivated and aimed at weakening German democracy. He referred to the firebombing in Solingen and a similar attack six months ago that had killed three Turks in Mölln, and stated that “the murders in Mölln and Solingen [were] not unrelated or isolated atrocities, but results of a climate created by the extreme right.” It should be noted that three assailants were sentenced to 10 year, while the other assailant was sentenced to 15 year imprisonment.

May 29 will mark the 25th anniversary of the Solingen tragedy, during which we are going to commemorate the Turkish victims of this painful tragedy. On this occasion, we have to ask a crucial question: what has changed in western Europe since then? Nowadays in Austria, a far-right party, having garnered  25 percent of the votes, is part of the coalition government. In Germany, for the first time in decades, a far-right party has entered into the Parliament by having collected nearly 13 percent of the votes in the general elections. Taking into account undecided voters who might contemplate voting for the far-right, the backing for far-right parties in Austria and Germany may easily rise respectively to one-third or one-fifth of the voters of these countries.

It is not possible to underestimate these numbers in any Western democracy. Moreover, in western European countries such as Belgium, Sweden, and France, racism, xenophobia, and Islamophobia are on the rise. Especially xenophobia, which involves aggression and violence, has now reached to extreme levels and has taken the place of old-style racism. Racist forms of discrimination have metamorphosed into publicly-accepted extreme xenophobia.