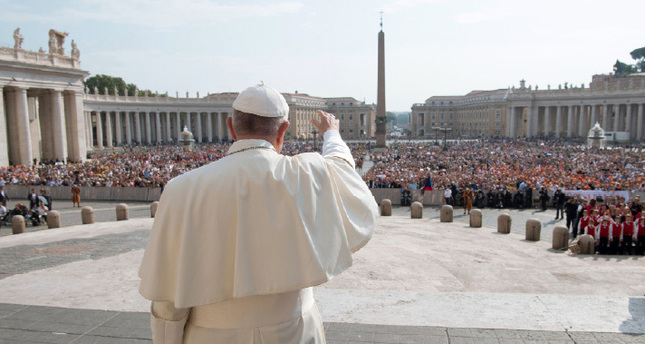 By his accusation of 'genocide' launched to the face of the Turkish people and his refusal to mention the crimes of Armenian extremists, Pope Francis ignored the history of his own church, particularly the stance of his predecessor Benedict XV (1914-1922)

Bryan Ardouny, a leader of the Armenian Assembly of America (AAA), cynically stated in 2005, to the authors of the documentary movie "The Armenian Revolt": "We don't need to prove the genocide historically, because it has already been accepted politically." In this regard, the statements of Pope Francis in 2015 and this year have been appreciated by Armenian leaders. Francis always denied any prejudices against Turks or Muslims in general. This defense is hard to conciliate with reality. For example, why was the current pope silent on the crimes perpetrated by Armenian nationalists against Muslims (more 500,000 victims) and Jewish civilians (several thousand killed) and loyalist Armenians, such as Bedros Kapamaciyan, mayor of Van, murdered in 1912? Similarly, why was Francis silent, during his visit in Armenia, about the monuments to terrorists (ASALA) and Nazi war criminals (Nzhdeh, Dro), which exist in Yerevan, as well as about the territorial claims of Armenia toward Turkey, represented by the stones of the "genocide" memorial in Armenia's capital city?

Born and raised in a country such as Argentina, which experienced serious troubles, including seven years of a merciless military dictatorship (1976-1983), Francis should know that selecting and distorting historical facts is particularly wrong.Nothing would be further from the truth, however, than imagining that the stance of the current pope toward the Armenian issue is in conformity with the Catholic tradition. The most obvious example is the prudence of Benedict XVI (2005-2013) vis-à-vis Turkey in general and the Armenian issue in particular. A more tragic one is the assassination, in 1977, of Taha Carim, Turkish ambassador to the Vatican, by the Justice Commandos for Armenian Genocide (JCAG, established in 1972 by the Armenian Revolutionary Federation), assassination which was, among other aims, an attempt to force Pope Paul VI (1963-1978) to make an anti-Turkish statement on 1915. As Paul VI and – initially - John Paul II refused to do so, Taha Carim's successor was victim of an attempt of murder by the JCAG in 1980.

Regardless, the most relevant question is the position of Benedict XV, who was the leader of the Catholic Church from 1914 to 1922. Indeed, in 1919 and 1920, the British authorities arrested a total of 144 former Ottoman officials. The main reason of most of these arrests was that they were suspected of crimes against Armenians during the First World War. Among these officials there was Sait (Said) Halim Pasha, Grand vizier from 1913 to 1917 and minister of Foreign Affairs from 1913 to 1915. On February 25, 1920, the British ambassador to the Vatican reported to his minister: "My Lord, I have the honor to enclose a note from the Cardinal Secretary of State relative to Said Halim Pasha, ex-Grand Vizir of the Ottoman Empire, and eight or nine other persons, including Dejvdet Bey, all of whom stated to have belonged to the Committee Union and Progress and who are at present interned in Malta.

"The Pope begs that Your Lordship will give the matter favorable consideration, expression of his hopes that if absolute liberty cannot be granted to these prisoners, they may at least be allowed special privileges consonants with their rank."

The document is in The National Archives, Kew Gardens/London, FO 371/5089/E1114. It shows that, in diplomatic language, Benedict XV asked for the release of Sait Halim Pasha, former governor of Van Cevdet and several other ex-leaders of the Ottoman Empire. This is logically impossible to imagine a pope asking for intervention on behalf of persons he believed to be killers of Christians; and barely less illogical to imagine that officials such as Sait Halim and Cevdet could have been innocent if a "genocide" had actually taken place. As a result, it appears that Benedict XV did not believe that the Ottoman state had tried to exterminate the Armenians. The pope, who was in charge during and just after the First World War, who had direct access to information, elaborated a much more complex and subtle opinion than the black-and-white vision of Francis. It also bears noting that if Sait Halim Pasha (also praised by German General Ottoman Liman von Sanders in "Fünf Jahre Türkei," Berlin: Scherl, 1919, p. 13) is a particularly difficult case for the supporters of the "Armenian genocide" label, who generally speak about him as little as possible, Cevdet, is on the contrary one of their favorite targets, after minister of Interior Talat and minister of War Enver, of course.

If the British authorities refused to release any of these officers, or even to "allow special privileges consonants with their rank," (see Jean Schlicklin, "Angora. L'Aube de la Turquie nouvelle," Paris: Berger-Levrault, 1922, pp. 119-128) the next year they had to admit that they had no evidence of any involvement of Sait Halim, Cevdet or any other ex-Ottoman official, in any massacre (see especially the letter of Judge Lindsay Smith, August 24, 1921, in FO 371/6504/E 10023). The intervention of Benedict XV was, as a result, fully justified. Yet, his successor Francis, who was not even born in 1915, decided to ignore what this pope thought, said and did.

Benedict XV's rational position toward the Turks was not isolated in the Catholic Church. Father Ludovic Marseille was the chief of the French mission in Eskişehir (Western Anatolia) before and after the First World War. In a detailed report dated Sept. 15, 1922 and sent to the Quai d'Orsay (Archives du ministère des Affaires étrangères, La Courneuve, P 1380), Father Marseille explained how the Turkish army had left the city without doing anything bad in 1921; and how the Greek one, defeated the next year, burned the same city without any military necessity, and forced, including by false tales of "massacres," the Christian population to leave. To fully understand the importance of this report, it must be known that, out of 10,000 Armenians of Eskişehir, about 3,000 - especially the Catholic ones - had been exempted of relocation in 1915. Anyway, it is simply unthinkable that Father Marseille did not make a second copy of his report for the Vatican. Yet, in the compilation of the Vatican's documents recently published, there is no trace of Ludovic Marseille. As a result, this omission seems deliberate, to mislead the public opinion, including scholars.

If the current pope does not want to remember Ludovic Marseille, another Armenophile, Abbot Émile Wetterlé (1861-1931) was much more honest in this regard. Wetterlé had given money for Anatolian Armenians in 1896 - after the bloody events provoked by the insurrections and terrorists acts of the Armenian revolutionists, who desired violence against their own people, to obtain a Russian and/or a British intervention. Then, in 1915, Wetterlé spoke again about the Armenians, not as a fanatic Christian, but as a French nationalist from Alsace, ready to believe any accusation against the German cabinet - supposed to have given orders to the Ottoman one. Yet, eventually, Wetterlé, elected as a deputy, went to İstanbul, İzmir and Syria in 1922, and developed a much more nuanced position. He summarized the report of Ludovic Marseille in his own book ("En Syrie avec le général Gouraud," Paris: Flammarion, 1924, pp. 84-86) and more generally expressed a rather accurate understanding of the suffering of Turkish civilians during the First World War and the war of independence - the very sufferings Francis never wanted to understand.

Pope Francis' irresponsible stance can only exasperate the religious prejudices and conflicts on both sides. It must be answered with precise and concrete facts from history, particularly those who can be found in Catholic sources. Then, we may hope that the shadows of Benedict XV and others will incite him to think again.