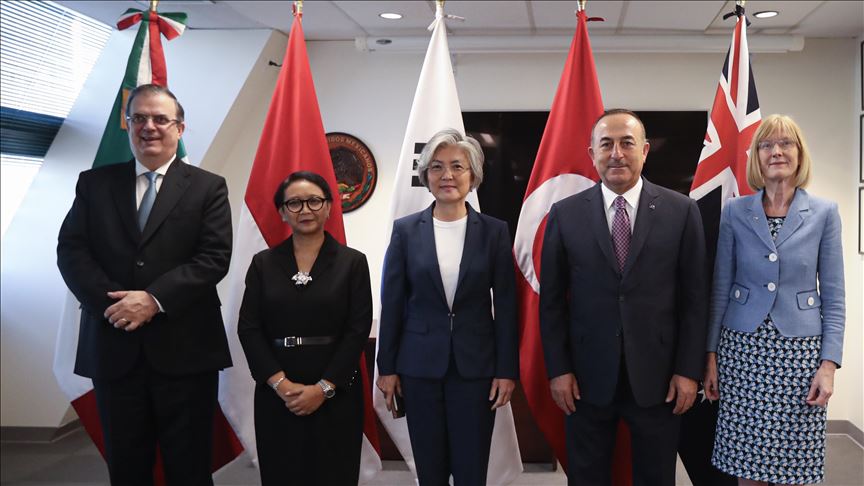 It is known that Turkey attaches importance to participation in international and regional platforms[1] with the aim of becoming an influential player in them. Within this perspective, Ankara took over the term presidency of MIKTA (acronym for Mexico, Indonesia, South Korea, Turkey, and Australia) for 2022 from Australia[2] on 7 March. The Foreign Ministry of Turkey stated that, during the 20th Foreign Ministers Meeting where Turkey took over the presidency[3], the joint activities managed under Australia’s presidency, the war in Ukraine, and Turkey’s future works as term president were discussed[4]. This is the second time that Turkey has received the term presidency since 2017[5]. It was stated that Ankara will attach importance to issues of global health, effective migration management, and food security[6] during its presidency. Indeed, Turkey strongly backs enhanced cooperation among the member countries and prioritizes strengthening cooperation with MIKTA members[7]. There is no doubt that MIKTA can further contribute to multilateralism while benefitting its member countries[8].

Before analyzing MIKTA’s contribution to multilateralism, the history and role of MIKTA organization must be mentioned. MIKTA was launched by the Foreign Ministers of MIKTA members on 25 September 2013, on the 68th UN General Assembly[9]. At first, MIKTA was launched as MIKT (or MIST), which included Mexico, Indonesia, South Korea, and Turkey[10]. Later, MIKT turned to be MIKTA with Australia’s participation to the platform[11].

MIKTA can be described as “a cross regional group and an informal consultation and coordination platform” which consists of Mexico, Indonesia, South Korea, Turkey, and Australia as member countries[12]. The five member countries view MIKTA as a partnership of progress[13]. MIKTA represents 500 million people, a GDP worth of 5.6 billion dollars and a trade volume of 1.5 trillion dollars in total[14]. According to Baba and Engin, “All 5 countries of MIKTA comprise a quarter of the world’s largest economies in the G20”.

It aims to provide cooperation and collaboration on matters of global significance[15]. Another aim of MIKTA can be defined as finding constructive solutions for global and regional challenges while providing effectiveness in global governance[16]. Moreover, MIKTA prioritizes strengthening cooperation among the members to increase its effect within the international organizations[17]. Apart from those, MIKTA members adopted seven core principles: 1) sustainable development, 2) reform of international energy governance and the promotion of energy access, 3) fight against terrorism and providing security, 4) pursuing peacekeeping role, 5) enhancing trade and economy between member countries, 6) promoting gender equality, and 7) pursuing good governance and protecting human rights and democracy[18].

The MIKTA Chair, which is appointed annually, is responsible of coordinating MIKTA activities[19], supporting crucial priorities of MIKTA, and providing multilateral collaboration[20].

Even though MIKTA has a varying country profile[21], it can be seen that its members are democracies and open economies which have significant growth rates and economic power[22]. Thus, the locations of the member countries are strategic in terms of providing connection to specific regions[23]. Furthermore, it can be suggested that MIKTA consists of likeminded members in terms the global challenges as well as being active contributors in the efforts to overcome them[24].

If the motivations of member countries are further analyzed, it can be stated that different members have different interests for joining MIKTA. For the Australia, it can be said that participation to the platform could increase Canberra’s reputation[25]. Secondly, as Australia’s economic, political, and strategic partner, South Korea joined the platform with the same motivation[26]. For Indonesia, MIKTA membership means an opportunity to increase its role through the middle power diplomacy[27]. Finally, it can be stated that participation was beneficial for both Turkey and Mexico as it offers a way to promote those countries' trade volumes and improve their economic growth[28]. Moreover, MIKTA membership can enhance those two countries in terms of energy cooperation, foreign investment, and easing of visa procedures[29].

In general, MIKTA offers its members a means to increase their cooperation and presence in global matters. The profile of the member countries, despite the differences in terms of their location, GDP, and culture, also suggests that so much can be achieved with cooperation. For instance, Australia is one of the greatest raw material providers to the Asia Pacific region while South Korea is one of the significant economic actors in Asia[30]. In addition to those, Mexico is another promising actor with its proximity to the US, USMCA membership and evolving relations with Central and South American markets[31]. Indonesia is a member of ASEAN[32] and possesses quite a strategic location. Finally, Turkey is one of the rising middle powers in the world with its strategic location and increasing diplomatic ties in the Balkans, the Caucasus, Central Asian Republics as well as the Middle East and Africa. Within this perspective, the member profiles and the increasing rise of middle powers in the world suggests that MIKTA can open new opportunities for its members in many areas.