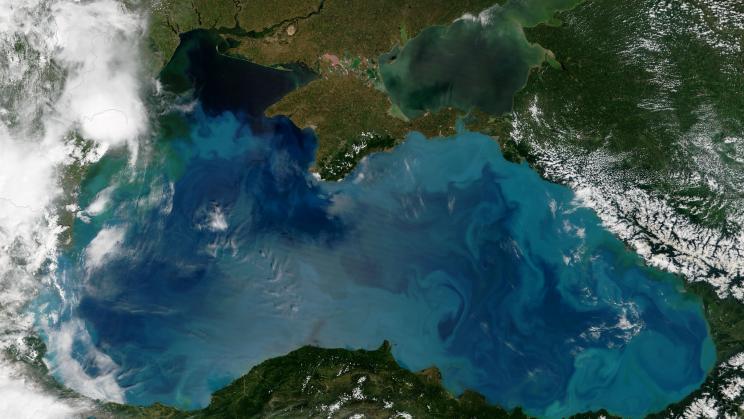 The world has been going through extraordinary times with the ongoing pandemic and rapid developments in certain regions. As the pandemic continues, so does the power competition between the great powers of the United States, China, and Russia. One specific reason for this rivalry can be explained by the rise of China and its attempts to become a hegemonic power, which is something the US wishes to prevent. Indeed, China’s rise in the world stage and its growing geo-political and geo-economical interests have been the targets of the Euro-Atlantic community[1] since it is perceived as a challenger to the Western-dominated liberal economic system. As a matter of fact, accounting for over 12 percent of global trade and 15.5 percent of the world’s GDP[2], China is of great concern for all countries since it is a great power with a huge population and massive economic power.

China’s rise to the first place in the threat perception of the US in 2012[3] and the recent trade war between Beijing and Washington demonstrate that the tension between the two countries have been on the rise for a while. Due to US’ actions based on its perception of threat, China and Russia have become more united against the US, leading to some commentators labeling this as a two-front new Cold War.

Within this context, a new hotspot for the great powers to compete is the Black Sea region where the Chinese presence and influence is growing. This has introduced friction to a region that already contains the Ukrainian-Russian and Russian-Georgian conflicts and the Crimea issue. The crucial reason for Black Sea to be under the spotlight is China’s Belt and Road Initiative (BRI) and Chinese investment in Black Sea Countries such as Turkey, Bulgaria, Romania, Ukraine, Georgia, and Russia.

To understand China’s interest in the Black Sea region, the BRI must be closely examined. The BRI, which was officially announced by Chinese President Xi Jinping in 2013[4], is accepted as the flagship Chinese project to revive ancient trade routes -more commonly known as the Silk Road- and aims to develop the economies and infrastructures of the partnering countries of the Initiative[5]. China has pledged at least 1 trillion dollars for this project. The project is mostly funded by the China Development Bank (the CDB) and the Export-Import Bank of China, both of which are known to have attractive loan options[6].

By initiating parallel projects in different economic corridors, Beijing is aiming to bridge the infrastructure investment gap with the BRI countries to boost its own economic and diplomatic ambitions[7]. Thus, the BRI has a goal to provide more market access for Chinese goods, services, and subcontracts[8].

However, there is notable suspicion about the future opportunities of this project. First of all, there is growing concern about whether Beijing is placing those countries in debt, which the said countries will inevitably fail to pay back in the long run and will most probably be put under pressure to provide political favors to China[11]. Another rising concern about the BRI are the efforts to use the project to go far beyond simply building roads and bridges to place partnering countries on a pro-Beijing axis[12].

When the Black Sea countries’ (Romania, Bulgaria, Georgia, Ukraine, Turkey, and Russia) connection with China are taken into consideration, it can be observed that the Chinese influence is increasing in the region despite the challenges of their bilateral relations with the Beijing. For instance, China became Romania’s second biggest trade partner outside the EU and has stable annual growth in both imports and exports with Beijing. However, the country has a considerable trade deficit, which was 4 billion Euros in 2019 with China[13] and China cancelled big scale investment projects in Romania like Cernovada Nuclear Power Plant. Bulgaria is more or less in the same situation. Despite optimistic views of the Bulgarian side to the BRI, Chinese investment remained small in Bulgaria, accounting for approximately 110 million Euros. Besides, just as in Romania, Bulgaria has a growing trade deficit with China. It is also significant to note that China has increased its activity and influence on the western coastal part of the Black Sea for the past decade, with the 17+1 (originally 16+1) formula in which Bulgaria and Romania are regarded as the stand-out participants[14]. As it can be seen, in both cases, the BRI has been beneficial for China more than for the partnering countries.

The same situation is present for Ukraine and Georgia, which are important for China due to offering short trade routes. Accordingly, it can be stated that China has increased its influence in those countries as well. Yet, like Bulgaria and Romania, those countries did not benefit from this partnership as much as China.

However, China’s trade relations with Bulgaria and Romania cannot be compared with Chinese investment in Turkey. Over the past five years, China has increased its investment in Turkey mainly in the mining, energy, telecommunication, transportation, infrastructure, finance, and banking sectors[15]. The Industrial and Commercial Bank of China (ICBC) acquired Turkish Tekstilbank in 2015 and the Bank of China became operational in Turkey with 300 million dollars. In addition to those, the Turkish banks of Akbank, İş Bankası, and Garanti have branches in China[16]. Moreover, the ICBC gave 1.2 billion dollars in loans to increase the natural gas production capacity at Silivri and Tuz Gölü[17]. Apart from those, Beijing also made huge investments in the telecommunication sector in Turkey. Turkcell’s agreement of 539 million dollars with CDB[18] is one of such investments. Lastly, Chinese investment in the Eurasia Tunnel, Northern Marmara Highway and Yavuz Sultan Selim Bridge represent China’s significant infrastructural investments in Turkey.

Although there is considerable amount of investment by China in Turkey, there are also challenges in Ankara-Beijing relations. The Uyghur question, the opposition to Turkey’s Middle Corridor and the uncertainty of future of Chinese investments for the BRI are the major weaknesses of the Turkish-Chinese relations. Nevertheless, the Chinese investment in Turkey means that China is growing its influence in yet another Black Sea country.

When it comes to Sino-Russian relations, there is uncertainty in general, especially in the Black Sea region. On the one hand, the two countries became “strategic partners”, as defined by Russia, due to global instability and the perceived unilateralism of the US[19]. The two countries have been cooperating in the energy sector and by 2016, Russia became the number one oil supplier of China[20]. Another field of cooperation between the two countries is the defense field. Beijing and Moscow carried out joint military exercises and China acquired the S-400 air defense system from Russia[21]. The deployment of tens of thousands of Russian troops near Ukraine and Crimea in April of this year (which have since been pulled back) is worth mentioning. Yet, the Ukrainian-Russian and Georgian-Russian Crises create divergence between China and Russia in the Black Sea region. In both crises, China has refused to side with Russia and did not recognize neither the occupations of South Ossetia nor Abkhazia and took a precautionary step by not recognizing the illegal annexation of Crimea and explaining that Beijing supports the territorial integrity of Ukraine.

In this sense, the Black Sea region is crucial for China since it offers substantial possibilities for maritime transport and commerce as well as large energy infrastructure as a transit route[22]. For the BRI, the region means a connection between the Middle East, the Caucasus region, and Europe. Another significant point of the Black Sea is that the region is viewed as a direct foothold from Asia into Europe[23].

Therefore, a different opinion suggests that the Black Sea offers a potential export market for China in terms of both renewable energy and nuclear technologies[24]. Since China is the world’s largest consumer of fossil fuels and world’s top importer of the crude oil[25], it will seek to import more energy in the future while turning towards its way to a cleaner energy.

In general, it can be said that Chinese influence is growing in the Black Sea Region with the continuing investment projects, mostly under the Belt and Road Initiative and Chinese Digital Silk Road Project despite the current challenges such as the limits of Sino-Russian relations, insufficient investment levels, and cancelled investment projects in Black Sea Countries such as Cernovada  Nuclear Power Plant in Romania and existence of diverging Black Sea Projects such as Turkey’s Middle Corridor. Nevertheless, China has turned out to be a crucial geo-economical actor in the world[26] and the weaknesses listed above will not prevent its future effect in the region. Accordingly, it would be appropriate to forecast that Chinese presence will continue to increase in the region despite lacking a united strategy.

[11] Lilkov, “The Belt and Road Initiative in the Black Sea Region”.

[13] Lilkov, “The Belt and Road Initiative in the Black Sea Region”.

[22] Lilkov, “The Belt and Road Initiative in the Black Sea Region”.