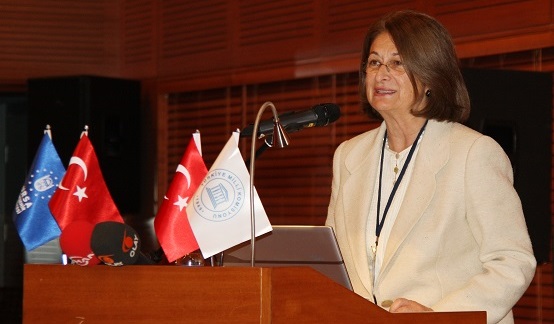 OPEN LETTER TO THE PRESIDENT OF ARMENIA*

I am writing this letter feeling compelled to bring to your attention my confusion, distress, and reaction to a news report that I have come across via the press.

In January 1973, in the town of Santa Barbara in the US, a US citizen named Gourgen Yanikian brutally murdered the Republic of Turkey’s Consul General of Los Angeles Mr. Mehmet Baydar and my husband Consul Bahadır Demir as part of a premeditated plan. In the lawsuit seen at the Santa Barbara Court regarding the murder, the felon named Yanikian pleaded guilty and was sentenced to life imprisonment. I assume that you are informed about this incident and the judicial process.

What has confused, upset, and led me to write this open letter is that this person’s remains have been moved from the US to your country’s capital and re-buried with a ceremony in a military cemetery. As far as I know, military cemeteries are areas that are reserved for heroes who have lost their lives in defense of their country. How can a person who lured in two defenseless, peaceful, and innocent diplomats into a murder scene through deceit, shot them with the pistols he had previously prepared, and on top of that, shot once again both diplomats suffering on the floor in their foreheads, be considered a hero? Moreover, the prosecutor of the lawsuit categorized this unrepentant person as a political terrorist, who stated at the court that his intention was to provide an example to others. It is quite clear that there are domestic and foreign policy priorities among the reasons behind treating such a mentally disturbed felon as a hero. Has it not been considered that this act would provoke terrorism, which is the bane of our times?

I am a retired ambassador. Domestic politics is not a field that I am familiar with. However, regarding foreign policy, I know very well the necessity and importance of a successful representative finding peaceful solutions to the present problems between countries or of efforts taken via both official authorities and the public in order to take precautions against potential future disputes.

How can this act carried out regarding a mentally disturbed, unrepentant felon possibly serve to the attainment of reconciliation and peace between two neighboring countries?

If the aim is not to create and consolidate amicable relations, the only outcome will be grieved people and families. Such an inconsiderate approach will thus bestow victimized families the right to expect a formal apology.