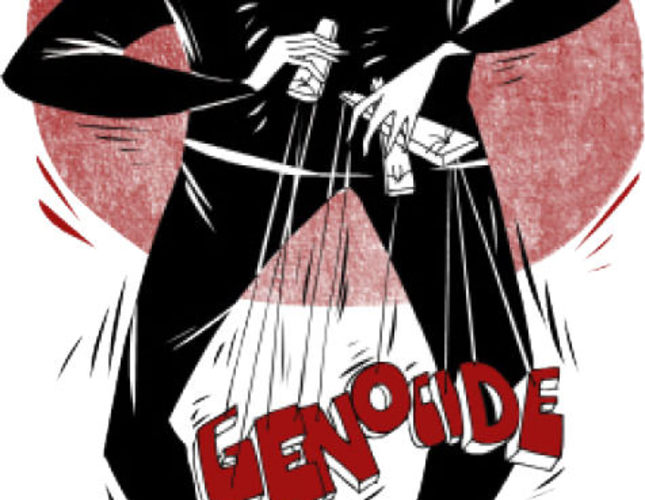 Once coming to the brink of apology due to political pressure from The United States, Turkey is once again being cornered by this country, not only with a terror corridor extending “from Qandil to Afrin” but also with Armenian allegations.

There is a scandal that has been revealed during the recent years by Şükrü Server Aya, who is well known for his researches on the Armenian claims.

According to Aya’s research and documentation, some 5,000 Armenians, who were taken prisoners from the Soviet Army during the Second World War, were reorganized by the Hitler regime into an “Armenian Legion" who fought against The Allies. This battalion was later evolved into an army of 22 thousand men, and a 33 thousand men army following that.

When Germany lost the war, the Armenian soldiers who fought in this army against the US Military did not receive any punishment. Quite the contrary, they were in fact helped to migrate into US and South America in smaller groups. These soldiers, who did not speak any foreign languages and were not craftsmen, created an “Armenian issue” and began to make their livelihoods through this, while offering their services to different intelligence agencies,. The terror organization known as ASALA was born as a result of these relations.

One of the soldiers in that Armenian Legion later prepared a text which he called “Hitler’s Speech on August 22, 1939". In this text, Hitler allegedly had said the following, prior to entering Poland:

“Genghis Khan led millions of women and children to slaughter -- with premeditation and a happy heart. History sees in him solely the founder of a state. It's a matter of indifference to me what a weak western European civilization will say about me. I have issued the command -- and I'll have anybody who utters but one word of criticism executed by a firing squad -- that our war aim does not consist in reaching certain lines, but in the physical destruction of the enemy. Accordingly, I have placed my death-head formations in readiness -- for the present only in the East -- with orders to them to send to death mercilessly and without compassion, men, women, and children of Polish derivation and language. Only thus, shall we gain the living space (Lebensraum) which we need. Who, after all, speaks today, of the annihilation of the Armenians?”

Later in 1946, the same document was presented as evidence to the Nuremberg Court, where German war crimes were being tried. In 1948, the court ruled that the document was a forgery and decided to remove it from the evidence file.

Years have passed. The German press began publishing commentaries, basically saying “Hitler followed the example of the Armenian Genocide, in planning his intended genocide on the Jews.” And their sole source was this forged document.

The people who prepared this fake document wanted to put parts of this text in the Genocide Museum in Washington. Failing to do so in the beginning, they got Fmr. US President Jimmy Carter involved. The document was then framed and it began to be exhibited in the same museum.

Recently, Armenian President Sarkisyan, The Armenian Patriarch and others who accompanied them posed before the world press with this fake document at the Genocide Museum in Washington.

It has been well known for twenty years by the museum authorities that there is no such document or speech. Author William L. Shirer, who wrote the most detailed version of the Nazi history, has in fact published the original text of the same speech that is attributed to Hitler in his encyclopedic book titled: "The Rise and fall of the Third Reich". And sure enough, there was no mention of the Armenians in that speech!

The piece of paper that was called a “document” was typed in Germany with a "non-German keyboard" typewriter; and it did not have even the slightest chance of constituting an evidentiary document.

Şükrü Server Aya examined this fraud in detail, and published it in his book: "The Genocide of Truth Continues but Facts Tell the Real Story".

The US military also found the original version of Hitler's speech. The text was exactly the same as the text provided in William Shirer's book. Hence, it was also proven in US Military documents that in his original speech Hitler did not mention the word “Armenian”.

Şükrü Server Aya sent copies of his book to The Genocide Museum, The Congress Library and The US Embassy. With the book, he asked the museum officials who told Mr. Melih Berk in 2002 (in reference to his inquiry) that they were “investigating the issue in question”, what the result of their investigation was.

Sukru Server Aya also forwarded all this information to the Turkish Ministry of Foreign via a written petition and demanded that they followed the issue up with the US authorities. The documents he presented were only opened to discussion by Armenian websites who were interested in finding historical truths.

Şükrü Server Aya now asks, in the face of silence from those who should be in charge of the matter, who tells the real truth? Falsified documents or the book describing the history of Nazi Germany and the documents found in the US Military Archive? Of, course if there is anyone anymore, who is interested in finding the truth! 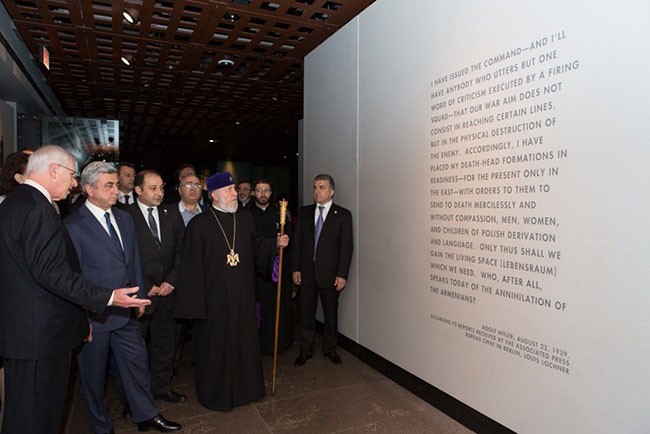 Sarkisyan Poses in Front of the Forged Document!

The Armenian President Sarkisyan, The Armenian Patriarch, and others accompanying them all pose together before the world press with the framed text of the so-called Hitler speech, which is based on a forged document. The so called document, which is proven to be a forgery by a court ruling, contains the following text:

“I HAVE ISSUED THE COMMAND-- AND I’LL HAVE ANYBODY WHO UTTERED ONE WORD OF CRITICISM EXECUTED BY A FIRING SQUAD-- THAT OUR WAR DOES NOT CONSIST IN REACHING CERTAIN LINES, BUT IN THE PHYSICAL DESTRUCTION OF THE ENEMY.

ACCORDINGLY, I HAVE PLACED MY DEATH-HEAD FORMATIONS IN READINESS-- FOR THE PRESENT ONLY IN THE EAST—WITH ORDERS TO THEM TO SEND TO DEATH MERCILESSLY AND WITHOUT COMPASSION, MEN, WOMEN AND CHILDREN OF POLISH DERIVATION AND LANGUAGE. ONLY THIS SHALL WE GAIN THE LIVING SPACE (LEBENSRAUM) WHICH WE NEED. WHO, AFTER ALL, SPEAKS TODAY OF THE ANNIHILATION OF THE ARMENIANS?”

ACCORDING TO THE REPORTS RECEIVED BY THE ASSOCIATED PRESS BUREAU CHIEF IN BERLIN, LOUIS LOCHNER 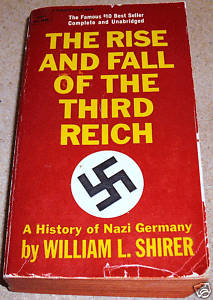 William Shirer published the original text of the speech attributed to the Hitleron pages 705-708 of his 1600-page encyclopedic book describing the Nazi period, titled: "The Rise and Fall of the Third Reich". There were no such words like “Armenian” or “Turk” in the whole speech! This book, which has been published countless times, provides the full details of the meeting that took place on 22/8/1939 (in p.705-708) along with the exact text of the speech.

How Does the Genocide of Truth Still Continue? 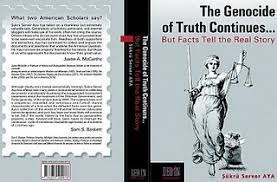 Şükrü Server Aya has published documents in his book "The Genocide of Truth Continues" with explanations, quotes, and pictures. And at the end, there is an open query to the museum. In chapter 14/2 of this book, a copy of which has been sent to the Museum Directorate and the US Embassy in Ankara in 2011, the issue is explained in 22 pages and a question was raised as to what the result of the research conducted in 2002 by the museum was. No response was ever received from the museum. 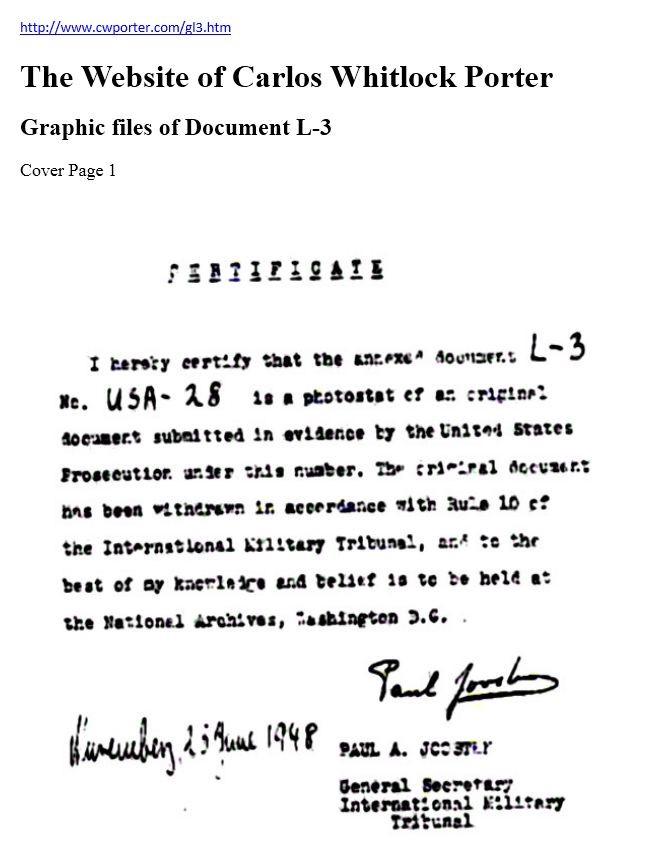 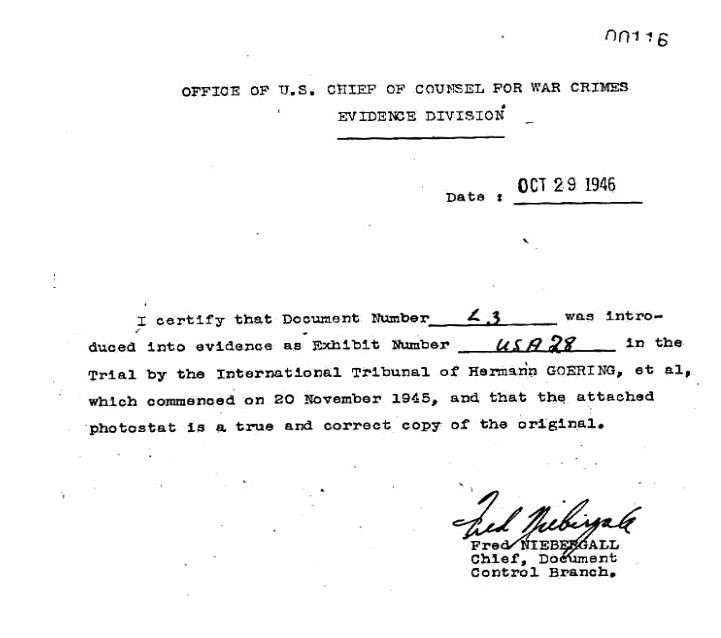 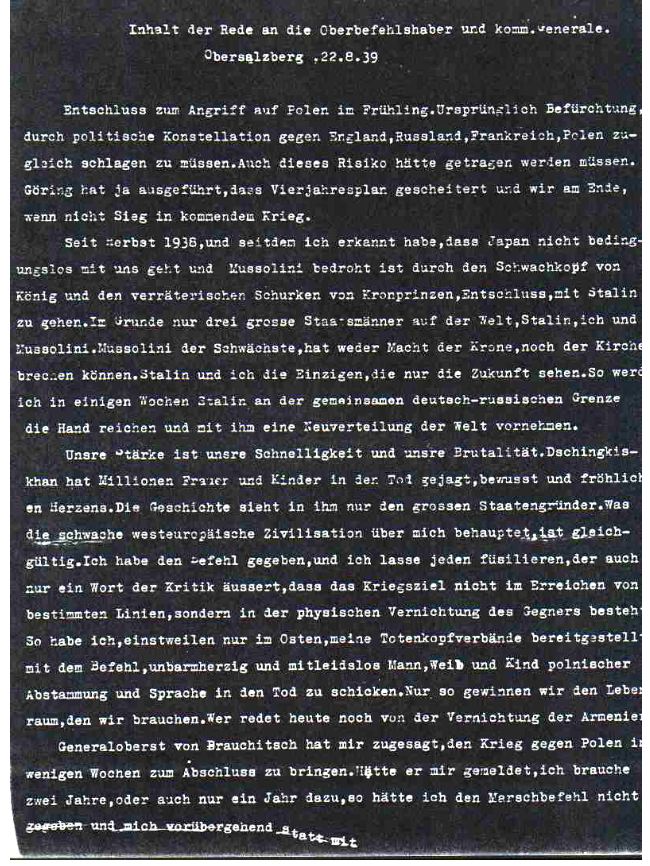 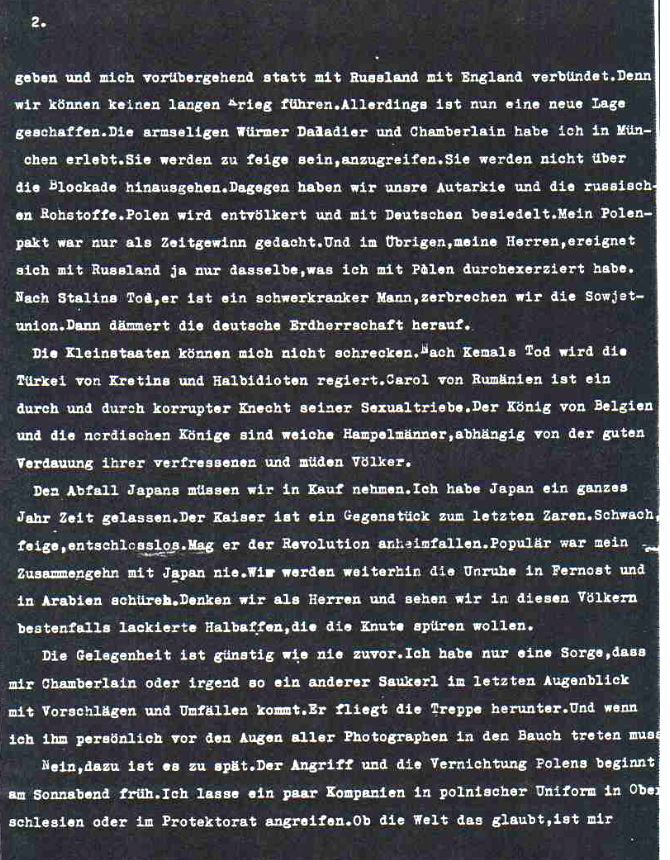 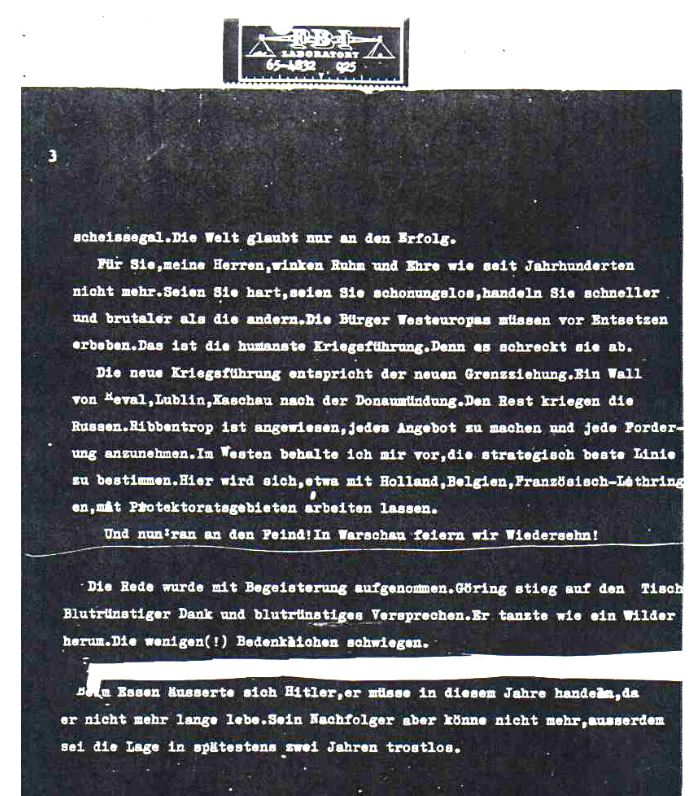 Australian Journalist, sworn German-English interpreter Carlos Whitlock Porter's website published all pages of the original negative photocopy of the "alleged” Hitler speech which was presented to the Nuremberg Court. On the web page, the General Clerk of the Court has a memorandum dated 1948, stating that the document filed is not valid. In the document, the letters – <ss> were typed adjacent instead of loaded ... This indicates that the forged document was typed on a typewriter that does not have a German keyboard. Could you imagine that Hitler’s headquarters had a typewriter that was not of German make? In its decision dated September 5, 1948, the Nuremberg Tribunal stated that the document "L-3" had been removed from the court file and stored away. 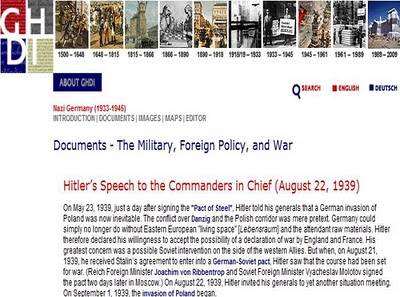 A copy of Hitler’s 1939 speech, found recently in the US Military Archives, has the exact same text provided in William Shirer’s book. It is understood from these official documents that the text displayed in the museum in Washington is indeed a forgery. Under the document, there’s a statement saying: "The English translation of the famous Hitler speech of August 22, 1939, where the sentence on Armenians is supposed to be present. Actually, there is nothing on Armenians, not even about Jews.”In short, the US Military Archive document says that the original speech contains nothing relevant to Armenians or Jews.