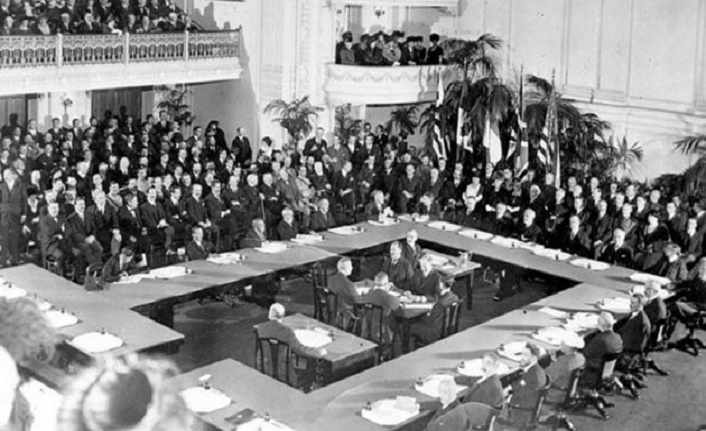 Peoples or states, before ever going into a deal with big powers need to think twice and keep in mind that it will most likely be the interests of those powers that will in the long run be taken into consideration and that the world order to be established by those powers would not necessarily fulfill their aspirations. Historically, among others, this assumption seems also to hold true for militant Armenian nationalists, who are known to have inclined most of the times to plan their future by leaning on a big power.

Of course, exceptions to this are to be found within the Armenian population of Anatolia. The Armenians of the Vilayet of Samsun, for instance, being aware then of the value of establishing a common future with the Turks, emphasized in a telegram they sent to the Grand National Assembly of Turkey that it would be much more honorable for the Armenian Patriarchate as well as for the leading members of the Armenian community to side directly with Mustafa Kemal Pasha, instead of knocking at the doors of the European states and being a tool of the Western imperialists’ schemes.[1]

After the First World War, the victorious powers had gathered at Paris, London, and San Remo Conferences to dictate their terms to their defeated enemies through peace agreements that took many months to conclude. The most difficult, longest lasting, and challenging of these agreements was the treaty to be made with the Ottoman state, because the ultimate purpose was the exclusion of the “Turk” from Europe and partitioning of the Ottoman territories. Accordingly, the Armenian natioanlists were given a solid promise to have an Armenian state on a considerably larger portion of these lands. This “state” would first be established under the mandate of the United States and later be united with Armenia which had come into being in the Caucasus in 1918. The dream of being an American mandate aroused a tremendous hope among those Armenian nationalists who were not successful at their attempted insurgency with the support of Russia in 1915. Yet, things did not go as they had expected, for on 19 May 1919 a new force emerged that the Allies, while discussing the future of Istanbul and Anatolia, had not conceived of or taken into account before: the Turkish Nationalist Movement.

The mandate issue had become a matter of discussion for the Turkish Nationalist Movement as well: A faction of nationalists came up with a demand to make Turkey a US mandate during the Congress in Sivas in September 1919. This was in fact one of the toughest political items that had to be personally dealt with by Kemal Atatürk. As it was not even clear whether there had been any such move from the US, he strongly defended the idea of full independence of Turkey against those asking for such a solution. His unbending stand was at the same time an honorable resistance against the new world order that the victorious powers intended to establish. Contrary to this approach, most of the Armenian nationalists were busy appealing to each and every door in Europe, clinging with eagerness to the promise given to them by the Allied countries for an autonomous Armenia. Of course, the answer to the question of whether full independence or mandate was the right solution was going to be clarified during the course of the years 1919 and 1920, at the end of which the Allied powers mercilessly left the Armenians with empty hands.

When the Peace Conference gathered in Paris in January 1919, the United States, the United Kingdom, and France had made firm commitments as to the establishment of an Armenian state. However, they were now less eager to become involved directly for such a move. We learn this dramatic judgement from page 46 of a book covering the partitioning of the Ottoman territories, entitled From Paris to Sèvres (Ohio State University Press, 1974, 376 pages). This book, which includes a rich bibliography, as well as extensive and most significant archival information, was written by the late American scholar Paul C. Helmreich (1933-2021).

In Paris, even the maps showing the areas to be cut off from the Turkish territory and handed over to the Armenians were neatly drawn and put to the disposal of the Conference. However, hard truths and the situation on the ground was totally different. First, the Armenian people in the region constituted at most 30% of the local population, much less in many areas. Moreover, non-Armenian groups were opposing any loss of land. Tension was high, hatred ran deep. Allies, which had just come out of a long war, were considering it a high risk to send troops to an area under those circumstances.

Some forty Armenian delegations had arrived in Paris from various countries and professions. They were ceaselessly reminding everyone their demands every minute and, with their importunity, annoyed even those people feeling sympathy for their cause.[2] Their ambitious demands included such extensive territories as the whole Cilicia, in addition to the vilayets of Van, Bitlis, Diyarbekir, Harput, Sivas, Erzurum, and Trabzon, as well as the harbor cities opening to the Caspian, the Black Sea, and the Mediterranean. Such endless demands did not stop short of causing hesitation among the world leaders who promised them a land. The sensation and enthusiasm that prevailed at the first weeks and months of the Conference gradually died out and left in their place realism and search for practical solutions. Victorious nations came to realize that, when established, such an immense state would require a high amount of material resources and that such a venture would draw the reactions of Turks and the Muslim people of the whole Near East. Moreover, once such big territories were offered to the Armenians, the agreements previously concluded among the UK, France, and Italy to partition the Ottoman lands could not have been implemented. Therefore, with Lord Curzon’s suggestion, an idea of a concession of a much smaller and landlocked territory, extending only to Erzurum in the west, to be united with the Armenian Republic in the Caucasus, was put into discussion. The idea included also as a favor an opening into the Black Sea to the free port of Batum.

This move did not suffice to bring an end to the demands put forward by those afore-mentioned Armenian groups: In addition to land, they began to ask for weapons, ammunition, and officers.  Such demands helped only to erode trust toward the Armenian nationalists. George Kidston from the British Foreign Office said on 28 November 1919 “I fear that there is not the slightest doubt the Armenian is at least as good a hand at massacring as his Moslem neighbor.”[3] Under such circumstances, Britain went ahead one step more and decided, with regard to the support to be lent to those groups struggling for their liberties in the region, to give them such assistance “as may be found desirable in the circumstances of each case as it arises.”[4] There could hardly be a worse blow than this decision for those pursuing the dream of establishing an Armenian state. There now remained hardly any trace of the resolve the UK and France had had in the beginning; they stopped committing themselves any more to supply money or weapons. The UK had already started to demobilize its forces in Mesopotamia, Egypt, and Asia Minor. France did not have a different position. Georges Clemenceau, French Prime Minister, said on 11 December 1919 on his meeting with his British counterpart Lloyd George that “The Armenians were a dangerous people to get mixed up with. They required a great deal of money and gave very little satisfaction… France was unwilling to spend any money in Armenia.”[5]

Thus, the UK and France tried to hand over the obligation of supplying men and money to the Armenian nationalists to the League of Nations, a new organization that had yet very little resources or means. Of course, this attempt was apparently not going to yield any outcome either, for sympathy towards both Armenia and Armenian nationalists was waning, compared to the eagerness witnessed during the beginning of the Conference. Finally, the UK and France decided to lay this issue at the door of the Americans. After a while, the US also began to realize the uphill nature of this matter and refused to undertake any mandate. The Bolshevik victory in the Caucasus in March 1920 was one of the last blows, if not the kiss of death, for this venture. Meanwhile, the National Movement in Anatolia was gaining momentum and strength.

Turning a blind eye to the realities developing on the ground, the final touch to the issue of “Armenian state map” in the Treaty of Sèvres was put by the Allies in San Remo, Italy, in April 1920. They agreed in principle not to the large sums of territories demanded by the Armenian nationalists, which was initially accepted by US President Woodrow Wilson, but settling for a small and “viable” piece of land. This Treaty was never implemented and soon found itself in the waste basket of history when the Treaty of Lausanne was signed on 24 July 1923. The delegates who were proposing such boundaries according to their own fancies apparently did not consider how these lands would be pulled off from Anatolia.

At last, all Armenian nationalist schemes put forward by merely relying on big powers met a dead end. The Armenian nationalists had entertained big hopes when the Turkish troops were defeated at the Balkan War, the Ottoman Empire ventured into the First World War, the disaster in Sarıkamış occurred, and the fighting at Çanakkale started.  At a time when the Turks were waging a struggle of life-or-death, they organized insurgencies with Russian assistance and slaughtered the Muslim population in eastern Anatolia, upon which the Ottoman state had no other option but to relocate the local Armenians.  Nevertheless, all Armenian nationalist calculations and plans failed because of various factors such as Russia’s slow handling of the occupation of eastern Anatolia, the unexpectedly strong resistance of Turkish armies at Çanakkale, and the total collapse of the Russian front in the third year of the war due to the October Revolution.

In every culture, one might have meaningful sayings advising people to make their judgement carefully when they are dealing with great powers. The one describing any relationship with Russia could be softened and modified in the following way: “The time of departure of someone who sits to a dinner with a bear depends not on him/her but the bear.” For those relying on US diplomacy, the saying may go like this: “American diplomacy always makes the right decision, but only after all wrong decisions have been tried.” Of course, while the Americans keep making the wrong decisions, the victim is always the one who counts on them.

Coming to our present time, the groups who are the successors of the afore-mentioned militant Armenian nationalists assume that they have succeeded in pulling the US toward their wrong historical narrative and have won the moral high ground. However, it is still a big question whether they would get the same support when, for instance, the Dashnak and Hunchak archives that they have been stubbornly resisting not to open are made public.