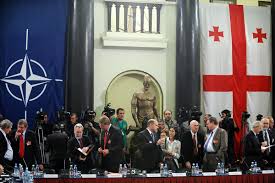 The tensions between the US and Russia continue to increase, Turgut Kerem Tuncel, a senior analyst on the South Caucasus at the Center for Eurasian Studies, told Trend.

“The increasing NATO deployment in the Baltics and Eastern Europe along Russia’s borders and Russia’s and China’s accelerated armament efforts accompanied by the hardening rhetoric of the sides are the apparent signs of this rapidly maturing political context,” he said.

Therefore, US Vice President Mike Pence’s affirmative statement about Georgia’s accession to the NATO should be evaluated within this framework, according to the expert.

Although the political situation in the Eurasian region is already tense, this statement would not be a major factor unless the US and NATO take concrete steps, which is not quite likely in the meantime, Tuncel believes.

“Certainly, US vice president’s words should be taken seriously and assessed accordingly. However, one may justifiably ask whether NATO has the required determination and ability to integrate Georgia into its framework,” he said.

The expert noted that this statement also demonstrates some level of inconsistency as Pence said that the US supports Georgia’s sovereignty and territorial integrity and condemned Russia’s “occupation” of Georgian territory.

Tuncel quoted Pence who said, “the United States supports Georgia's sovereignty and territorial integrity within its internationally recognized borders” and “the US will object to any claim at any time by any nation that undermines this enduring principle.”

“It remains inapprehensible, however, as to how the US administration does not hold the same principle with respect to Armenia’s occupation of Nagorno-Karabakh and the surrounding regions, which are a part of Azerbaijan’s internationally recognized territory,” said Tuncel.

“Armenia has not only been occupying the internationally recognized territory of Azerbaijan, but it is also the major outpost of Russia in the region housing the Russian 102nd military base and the Russian 3624th airbase on its soil. Moreover, in July 2017 Armenia ratified the formation of a joint Russian-Armenian military force in Armenia,” he said.

“As such, it seems that the US is not only in pains to formulate a consistent strategy, it is also in the loosing ground in terms of persuasiveness,” the expert noted.

US Vice President Mike Pence reassured his country’s strong support for Georgia’s ambition to join NATO at a meeting with Georgian Prime Minister Giorgi Kvirikashvili in Tbilisi on August 1.

In April 2008, at the summit of NATO member countries in Bucharest, it was confirmed that Georgia may become a NATO member in the future if it meets NATO standards.