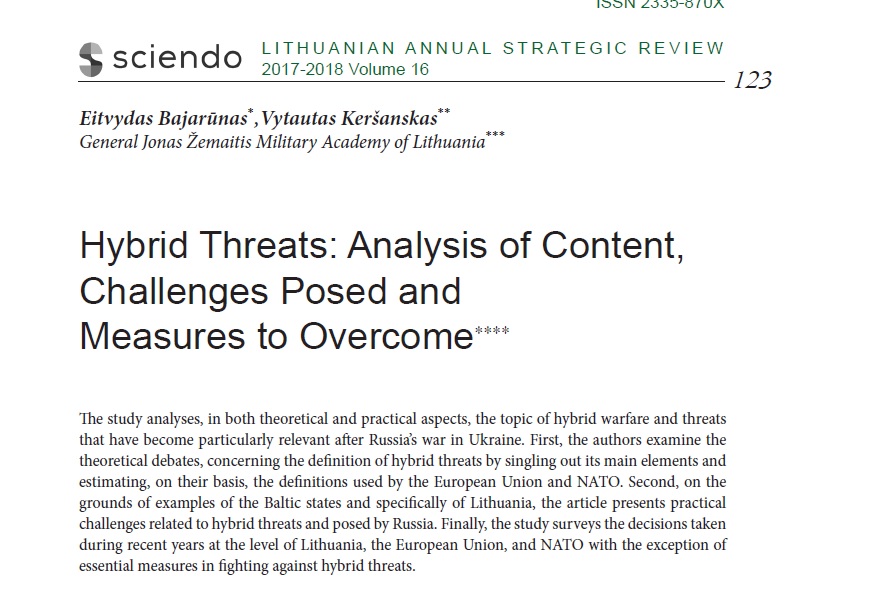 On 13 December 2018, the Embassy of the Republic of Lithuania in Turkey and the Center for Eurasian Studies (AVİM) jointly organized a panel titled “Fake News and Propaganda as Hybrid Threats.”

The panel started with the opening remarks of the AVİM Director Ambassador (R) Alev Kılıç, Ambassador of Lithuania to Turkey Audrius Bruzga, and the Ambassador-Designate of Turkey to Lithuania Gökhan Turan. Following the opening remarks, panelists, Ambassador-at-Large for Hybrid Threats (Ministry of Foreign Affairs of the Republic of Lithuania) Eitvydas Bajarūnas, Strategic Communication Specialist at the Strategic Communication Department of the Lithuanian Armed Forces MSgt. Tomas Čeponis, AVİM Senior Analyst Dr. Turgut Kerem Tuncel, Journalist Yusuf Kanlı, and the Defence Editor at DELFI Online Media Company and Contributor to Debunk.eu Vaidas Saldžiūnas delivered presentations on the significance of the hybrid threats, the ways to detect and counter fake news and propaganda, and the socio-political contexts that enables the dissemination of disinformation.

Below we present the abstract and the introduction of a research article titled “Hybrid Threats: Analysis of Content, Challenges Posed and Measures to Overcome” that was authored by the panel participant Eitvydas Bajarūnas together with Vytautas Keršanskas (Deputy Director and Policy Analyst of the Eastern Europe Studies Centre, Vilnius / Lithuania) and published in Lithuanian Annual Strategic Review 2017-2018 Volume 16. You may access the full article at https://content.sciendo.com/view/journals/lasr/16/1/article-p123.xml.

The study analyses, in both theoretical and practical aspects, the topic of hybrid warfare and threats that have become particularly relevant after Russia’s war in Ukraine. First, the authors examine the theoretical debates, concerning the definition of hybrid threats by singling out its main elements and estimating, on their basis, the definitions used by the European Union and NATO. Second, on the grounds of examples of the Baltic states and specifically of Lithuania, the article presents practical challenges related to hybrid threats and posed by Russia. Finally, the study surveys the decisions taken during recent years at the level of Lithuania, the European Union, and NATO with the exception of essential measures in fighting against hybrid threats.

The term “hybrid”, that became relevant after Russia’s illegal annexation of the Crimea and its continued aggression in Eastern Ukraine, turned essential in conceptualizing modern warfare and threats. A somewhat new paradigm emerged in defining anew the threats that the European security architecture is facing. Yet, in spite of great interest in this topic, many theoretical and practical challenges remain unsolved.

The phenomenon of asymmetrical, non-military, and mixed fighting attracted attention much earlier. It suffices to recall the continued antagonism between Israel and Hezbollah, Russian-Chechen wars, the confrontation going on in Afghanistan, or ISIS/DAESH activities – all these unconventional conflicts correspond to the existing definitions of hybrid warfare. In addition to these, the term “political warfare” that has some similarities with hybrid warfare also plays a part in theoretical debates.[1] In order to explain non-military measures, there exists a four-decades-ago-developed concept of “soft power” that is an important pillar of the foreign and security policy of Western countries.[2] Meanwhile, the USSR worked out its own means of influence, such as ideological fighting, propaganda, agitation, deception, “reflexive control”, and “active measures” (rus. активные меры), developed specifically by the KGB and taken over, at least partly, by Russia. The elements of all these concepts are also part and parcel of the discussions concerning hybrid warfare.

Warfare or confrontation while employing non-military means, is, as well, deep-rooted; however, Russian intervention in Ukraine distinguished itself by an exceptionally wide employment of these means. Instead of an obvious enemy, “little green men” without insignia conducted operations. Ukraine suffered diplomatic, energy-related and economic pressure, unprecedented informational impact, cyberattacks, and actions by special operations forces. Eventually, these actions turned into conventional military actions. These developments are well described in studies by Evgen Dykyi,[3] Evgenij Magda,[4] and others.

Responding to new circumstances, the academics community of and analysts split into supporters and sceptics of hybrid warfare as a new type of warfare. Roger McDermott called hybrid warfare a myth,[5] while Michael Koffman and Mathew Rojansky stated that hybrid warfare cannot replace the perception of traditional warfare and might only explain the dissemination of Russia’s influence.[6] In the opinion of Mary Ellen O’Connell, in the history of the 20th century, one might find many examples of analogous warfare; therefore, the events in Ukraine are not an example of a new kind of warfare.[7] Eventually, Bettina Renz and Hanna Smith also emphasized that such an analytical tool is defective in order to estimate threats posed by Russia as it narrows the approach and thus might serve the aggressor himself.[8]

Nonetheless, the concept of hybrid warfare and threats attracted many supporters. Jury Raitasallo, though stating that as an analytical tool, this concept is limited since many of its elements are an “elementary, traditional” statecraft, still believed that it is necessary to return to the discourse the traditional perception of power in international relations, the perception that was forgotten in the security concept dominating in the West after the Cold War.[9] Alexander Lanoszka argued that the concept of hybrid warfare enables explaining, in the best way, Russia’s ambitions in the post-soviet space in order to project the response of these countries and NATO to the evolving threats.[10] Christopher S. Chivvis underlined that, though hybrid threats are not new, Russia tailored them to the 21st century; therefore, the development of this concept is necessary to formulate a response.11[11] Lithuanian authors Kęstutis Kilinskas[12] and Remigijus Žilinskas,[13] as well, put forward arguments and substantiated the relevance of the concept of hybrid warfare and also the Russian hybrid war’s exceptionality, which is determined by the scope of Russia’s power projection and the application of old methods in new ways, thus causing a threat to the functioning of states and national security.

In general, the concept of hybrid warfare refers to a much earlier developed concept of the fourth-generation war,[14] the essence of which lies in the manipulation of mass media, execution of acts of terrorism, absence of a  clear hierarchy and structure of the enemy, employment of military, economic, financial, energy-related and social pressure measures, use of asymmetric tactics, and the implementation of combined and coordinated, overt and covert military, para-military and civilian measures. Taking advantage of the vulnerability of a country or region, the enemy performs these actions to affect or destabilize the adversary, hinder the process of decision-making and thus achieve the agreed tasks. The Ukrainian experience indicates that political and energy-related pressure, propaganda, and provocations might become a preparatory stage of conventional aggression.

On the other hand, in developing a new definition and its content, authors often encounter another extreme. The term “hybrid” is often used while attempting to define everything that takes place in a non-conventional form or is more difficult to define by using traditional terms, for example, attributing a single hacker attack or employees protesting because of social problems to hybrid actions.

With Russia continuing to pursue an aggressive policy directed against the West, the Baltic States are often defined as yet another potential object of Russia’s hybrid actions. Therefore, for them, the term “hybrid” became relevant not only theoretically but also practically; not only as an academic but also as a strategic challenge.

In the absence of a completely precise definition or content of a hybrid threat, countries or their groups face a significant dilemma – how to fight against these types of threats, what measures to counter them with? Therefore, hybrid threats should be conceptualized from both the theoretical aspect and, resting on it, estimated from the point of view of practical-retaliatory actions.

Thus, while intensive debates on hybrid threats are still going on, the objectives of this article are: (1) to survey theoretical discussions on the definition of the concept of hybrid warfare and threats, as well as to single out the relevant definition; (2) to assess external influence measures used by Russia, their role in strategic documents, and the challenges posed by them to Lithuania, the European Union, and NATO; (3) to review and assess measures and actions of states, of the European Union and NATO in countering hybrid threats.

Having surveyed various scientific studies that researched hybrid warfare, the authors will name in the article the essential elements of hybrid warfare and, later, on their basis, will assess the concept of hybrid threats in the strategic documents of the European Union and NATO, as well as their application in Lithuania. Further, resting largely on the case of the Baltic States, the researchers will present in detail the effect of Russia’s hybrid influences. Finally, the authors will pay particular attention to fighting against hybrid threats: starting with the survey of theoretical means and finishing with the actions of Lithuania, the European Union, and NATO seeking to enhance resilience to hybrid threats.

[3] Dykyi E., The ‘hybrid war’ of Russia: experience of Ukraine for the Baltic States. Vilnius: The General Jonas Žemaitis Military Academy of Lithuania, 2016.