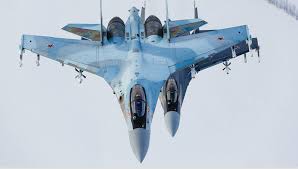 The Russian newspaper Izvestia announced, on June 19, that the country’s newest super-maneuverable fighter, the Su-35S (“Flanker-E” in the NATO classification), will soon be deployed to annexed Crimea. According to Izvestia, “The Su-35S is capable not only of guaranteed destruction of fifth-generation fighters, but also of effectively destroying ground and surface targets, which is especially important for control of airspace over the Black Sea” (Izvestia, June 19). The Su-35S (letter “S” stands for “serial”—not developed and still undergoing testing or verifying) is considered by the Kremlin to be a “4++” generation fighter. This combat aircraft was developed based on the Su-27 fighter design, but with a new cockpit and more modern engines, avionics and weaponry (Militaryarms.ru, April 30).

Plans to deploy these fighters to Crimea had not been disclosed by the Russian military until now. Nevertheless, Moscow’s intentions to this effect could have easily been predicted. In fact, Russia has been augmenting its air force presence in occupied Crimea since it forcibly absorbed the Ukrainian peninsula in 2014. Over the last five years, it has reconstructed the Belbek Air Base, near Sevastopol, where the 38th Fighter Regiment is located (Aviation21.ru, August, 15, 2018), as well as modernized the Chauda training range center, in eastern Crimea, to provide comprehensive instruction for pilots and crews of the Su-35 and other combat aviation platforms (TASS, May 24, 2019). Three years ago, Su-35Ss first saw action in Syria (TASS, February 1, 2017).

Based on the plane’s reported capabilities and tactical range, the Su-35S (when taking off from an airfield on the Crimean Peninsula) should be able to intercept air targets throughout the whole of the Black Sea region (Izvestia, June 19). But long-range air-interception missions, especially of low-flying targets, will probably be quite limited due to the lack of modern airborne early warning and control (AEW&C) systems in the Russian Air Force. Russia introduced the A-100 AEW&C aircraft in 2015 and plans to construct 39 of these machines by 2020 (Bastion-opk.ru, June 24). But to date, no A-100s have been deployed to any active units (RIA Novosti, February 9).

It is important to clarify that, in line with the Russian concept of what a multi-role fighter jet should be able to do, the Su-35S can not only intercept and hit aerial targets but also strike at ground-based objects (Mil.ru, accessed July 9). According to this vision, Su-35s can carry guided bombs and air-to-surface missiles, including the 260-kilometer-range X-35Y anti-ship missile with passive homing and a 145-kilogram warhead (Topwar.ru, October 23, 2017; Mil.ru, September 25, 2018). This strike capability invites special attention due to the Kremlin’s active desire to build a reliable anti-access and area-denial (A2/AD) bastion around Crimea—particularly encompassing the northern part of the Black Sea and all of the Sea of Azov.

Syria presents its own set of issues vis-à-vis the Su-35. Even though the Kremlin repeatedly asserts that the Syrian civil war is finally winding down (see EDM, March 15, 2016; November 27, 2017; October 30, 2018), Moscow pointedly does not plan to reduce the presence of its combat aviation, including four Su-35S platforms, at the Khmeimim Air Base (Interfax, February 2, 2017; Nvo.ru, January 15, 2017). In accordance with the bilateral Russian-Syrian agreement signed in 2015, this facility was transferred to Moscow by the government in Damascus for the indefinite deployment of Russia’s Air Force group (RIA Novosti, April 21, 2019). As such, the Su-35 deployment to Crimea would allow the Kremlin to improve fighter rotation logistics to/from Syria (News-front.info, June 19) as well as provide opportunities for Crimean Su-35S crews to receive combat experience in Syria.

That said, the announced deployment of Su-35s to Crimea does not mean that massive numbers of such fighters are likely to appear over the Black Sea in the near future. Most of the 78 Su-35S jets purchased by the Russian Air Force (VPK.news, December 13, 2018) are already stationed in Karelia and the Russian Far East. So the upcoming deployments to annexed Crimea are unlikely to exceed more than a handful of these platforms. Moreover, the authorities have announced plans to simultaneously increase Russian air capabilities in the Black Sea region by deploying the expensive, new fifth-generation Su-57 fighter (Today Khabarovsk April 8). Early Russian defense ministry plans foresaw acquiring and deploying 52 such advanced jets by the end of 2020 (Vz.ru, July 6, 2018). But difficulties in development of this next-generation fighter forced Moscow to postpone these plans to 2028, at the earliest (RIA Novosti, June 10).

It should also be noted that Russian pilots have identified a number of technical problems with the Su-35S, including the planes that have taken part in combat operations over Syria (Moskovsky Komsomolets, February 16, 2015; RiaFan, June 5, 2017). Additionally, some key components for these aircraft had previously been supplied by Ukraine. But after the tightening of the sanctions regime, Russia had to switch to its own defense contractors (Vz.ru, December 13, 2016).

The announced deployment of Su-35Ss to Crimea should be seen in light of Russia’s broader military buildup in the Black Sea region. However, some important constraints to these plans can be expected: first of all, the number of Su-35s available for a Crimean deployment is limited, and second, their full technical potential still looks problematic. Most likely, Moscow will use the Su-35s based in Crimea to intimidate neighbors, rather than to genuinely augment its strategic air domination over the Black Sea.