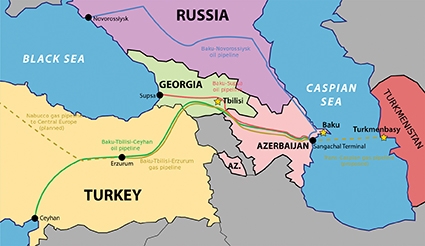 It’s been a few weeks since the Baku-Tbilisi-Kars (BTK) railway opened and the first cargo shipment has already passed through the station in Tbilisi to arrive peacefully in Turkey. Apparently, this was regarded as a revolutionary event in regional politics, and Russia started talking about initiating the construction of a new railway route. Meanwhile our neighboring Yerevan started investigating reasons for the failure of the project which could have been an alternative to the Baku-Tbilisi-Kars railway project.

Since Russia realized that it might be withdrawn from the New Silk Road railway project, President Putin announced the construction of a new high-speed railway route crossing Kazakhstan. The Kremlin thinks this Northern railway will compete with the Southern Route or the Baku-Tbilisi-Kars. But before Putin’s plan turns into reality, this Caucasian railway route is supposed to handle 1 million passengers and 6.5 million cargos from China to Europe in the first years. Notably, Russia is connected with China through rail, the famous Trans-Siberian route, which has been functioning for years. Yet, its cargo wagons move with the speed of only 12 km p/h, which means that cargo coming from Beijing will never reach Brussels. On the question as to why the Silk Road railway route can’t go through Russia, the Ambassador of China to Russia Li Hui replied: “Everyone has the right to participate in the New Silk Project, including Russia. However, everyone must be aware that this road is not the one moving from point A to point B or a route which camels can take.” Apart from the issue of speed, the Chinese have other concerns, too, one of them being the unpredictable foreign policy of Putin’s government, feared widely by everyone, including Europe and China.

As for our neighbor, serious debates began in Armenia about the issue of Javakheti the moment the BTK railway opened. The media wrote that the railway gave Tbilisi an opportunity to take full control over the region and even resolve the Javakheti problem. A quite precise assessment from their side, if not the question as to how it fits into the neighboring policy of Georgian-Armenian relations.

The BTK will enliven the sleeping Javakheti, the Municipality of Akhalkalaki, densely populated by Armenians; and will offer new jobs, which of course will result in reduced separatism. But mentioning this railway route, as a rule, brings up just one association in Yerevan, which is the isolation of Armenia. Indeed, after the railway started operating, Armenia found itself isolated from all international transportation projects. The only international transport project, Artashat - Meghri, which was supposed to connect Armenia with the Iranian transportation network, failed and now construction of a transport corridor between Azerbaijan and Iran is being discussed. This is how Armenia found itself without a railway connection to the outer world. The Armenian government takes all given chances to blame Georgia for this isolation, though everyone knows that Official Tbilisi has nothing to do with it and Armenia should instead blame everything on the annexation of Karabakh, which has been haunting it for two decades.

In 2008, Armenia had the chance to break this cursed loop, the process was even given the name “Football Diplomacy”, a game between the national teams of Turkey and Armenia, scheduled in Yerevan. Then-President of Turkey Abdullah Gül attended the match. Parallel to this process, the Armenian side initiated unprecedented reconstruction works of the 12 km-long section of the Gyumri-Kars railway, which went through Armenia. The goal of the restoration works wasn’t announced, but everyone knew: if the political dialogue between two countries ended successfully, one of the first important outcomes would be the opening of said railway route, which would have had essential importance for Armenia. However, the process failed: Armenian nationalists accused the government of “selling” Karabakh and this project became a thing of the past. The Tbilisi-Gyumri-Kars railway followed, which could have served as an alternative to the Baku-Tbilisi-Kars project. That’s what happens when numbers and economics are substituted by Hurray-patriotism. Therefore, we should learn the Armenian lesson and always keep it in mind.