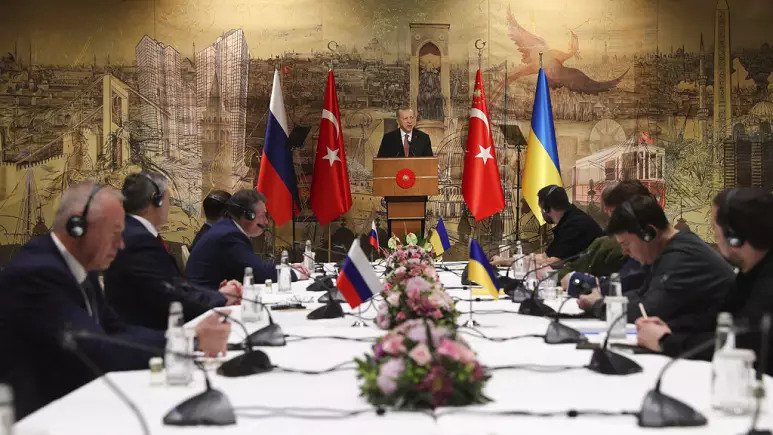 Ankara proposes itself as a broker of a peace solution between Russia and Ukraine. But finding a balance is getting more difficult due to high stakes for the opponents as well as the role external actors play in this conflict.

At the opening session of the UNGA in New York, President Recep Tayyip Erdogan of Türkiye emphasized the need for an international peace effort in the Russian-Ukrainian war calling to find “a reasonably practical diplomatic solution that will give both sides a dignified way out of the crisis”[1]. The fact that Türkiye is technically ready and politically accepted to engage as an intermediary part is already a reason for certain optimism, although finding a ‘dignified’ solution between the opponents in this conflict may be a very ambitious and complicated, so to say, Talleyrandian task.

The underlying cause is that the ongoing war does not only a geopolitical dimension but is a part of much wider and deeper competition, a clash of alternative civilisational projects. As Alexey Arestovych, advisor of Ukraine's Presidential Administration Chief and a rising star in the Ukrainian political scene metaphorically puts it: “This conflict is about the legacy of the Kievan Rus’. Arabs and Jews fight for the Temple Mount and we fight for the Kiev-Pechersk Lavra”[2]. Certainly, control over this or that territory may have tactical or operational significance during the active phase, but from the strategic point of view, any ceasefire line other than the 1991 internationally recognized state border of Ukraine is meaningless and will not serve as a basis for a lasting peace solution. On the other hand, no territorial gains for Russia make this war senseless and thus difficult to justify before its own population. In terms of chess terminalogy, this is a classic case of zugzwang.

From Ukrainian point of view, the supposed end of war will not only define its territorial shape, but the very existence of the statehood and even the nation. The logic behind that comes from the fact that nation-building process in Ukraine never came to an end and is the following: if we agree that a part of Ukraine is not really Ukraine and people living there can be defined by other criteria than their Ukrainian citizenship (ethnic, cultural, linguistic etc.), then we agree that Kiev’s control over any other part of Ukraine may be put into question in the future. Thereby, any territorial compromise now will legitimize Russian narrative of Ukraine as an ‘artificial state’[3] and provoke its new claims in the future.

On the other hand, Russia also feels that it is facing an existential threat[4]. Certainly, former Russian Minister of Culture as well as other nomenklatura members may tend to equate the existence of the ‘Russian civilisation’ to the existence of the actual regime, but there is something to it and the existential anxiety of Russian elite is not entirely groundless. One of the factors leading to the decision to start the war is the growing uneasiness of Kremlin with the fact that from the point of view of global balance of power Russia is visibly declining, especially in comparison to its western, southern and eastern competitors. The Russian model of development is unattractive for the former Soviet republics up to a point, when the simple presence of alternative models (such as Poland or Türkiye) by their borders makes any Moscow-centric integration impossible. Russian strategy planners understand that if they let the processes flow freely, Moscow may soon not only lose its zone of influence in the ‘near abroad’, but be confronted with similar questions inside its own national republics. Logically, if Moscow does not establish its presence by hard means, ‘soft’ factors will continue to play in its disadvantage, compromising not only its international identity as a great power capable of managing its supposed sphere of responsibility, but putting into question the very sense of its civilizational model internally. If Ukrainians or Belarussians prefer to live the ‘Polish way’ while Georgians and Azerbaijanis chose everything Turkish, there is no reason that this kind of questions would not arise in Kazan or Ufa as well as in Smolensk or Novgorod, not to mention Moscow and St. Petersburg.

Bilateral resentments between Russia and Ukraine standing behind their motivation for not losing the war and shaping their views on what ‘victory’ is and what ‘defeat’ is are complicated enough, but Turkish President Erdogan very diplomatically did not mention two other factors that may hamper a ‘dignified’ solution: a global and a regional one.

The global aspect consists of the fact, that the West, institutionally embodied by NATO and the EU, is not that much interested in the exact territorial affiliation of Donbass or Crimea but in Ukraine as an incarnation of Western values and a vivid example of Western development models’ attractiveness. As Kemal Derviş puts it, the West envisages “a ‘victory’ in Ukraine that lays the foundations for a world in which democracy is more secure and global governance more inclusive and effective”[5]. From Western point of view, the conflict in Ukraine is a part of Huntingtonian ‘clash of civilizations’[6] and its outcome will determine not only existence and shape of a specific country in eastern Europe but the overall ability of the West to stay as an attractive pole of power in the 21st century. In Washington or Brussels, losing Ukraine is equal to losing ideological credibility and civilizational appeal.

But there is also a regional factor which plays a role in this conflict. The fact that Ukraine borders several central European countries induces wide discussion on the new regional architecture that will result from the peace solution: either the whole region will be transformed into a ‘grey zone’ without any security guarantees according to Russian President Vladimir Putin’s January 2022 proposition[7] and thus again potentially dominated by Russia or, the role of buffering Moscow will be passed to Ukraine turned into a geopolitical stronghold on the regions’ eastern flank. Once again, the result of the war will determine not only where whose tanks are stationed, but all parameters of the regional development: the closer Russian forces are to the Polish border, the less investors the country may expect to risk their involvement in the Polish economy. That is why in central Europe Turkish President Erdogan’s’ statement that “a lasting peace must be based on protecting Ukraine's territorial integrity”[8] is interpreted in its wider, pre-2014 meaning.

The Turkish President's words about ‘dignified’ solution may be interpreted as a warning that an unbalanced deal may transform post-war Russia into an aggressively revisionist kind of a nuclear Weimar Republic concentrating all its resources on destroying the peace treaty provisions one by one. This would be an unfortunate outcome, but the paradox consists in the fact that the longer the war lasts, the more attractive a kind of unconditional surrender of Russia may seem to Ukraine as well as regional and global players.

[5] "What are the West’s strategic goals in the Ukraine war?" (brookings.edu), http://www.brookings.edu/opinions/what-are-the-wests-strategic-goals-in-the-ukraine-war/

[6] Samuel P. Huntington, The Clash of Civilizations and the Remaking of World Order (Simon & Schuster, 2011).