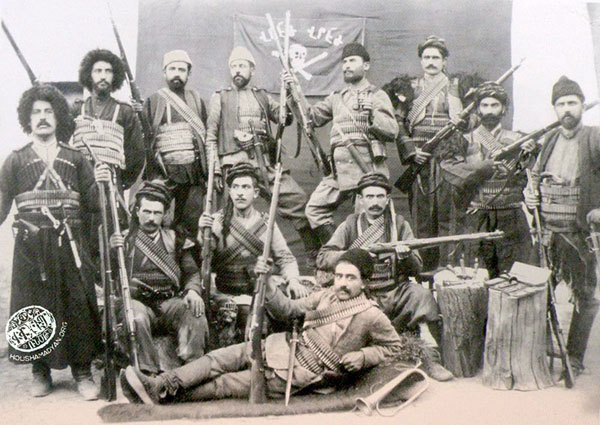 The lesson here is that identities, narratives or campaigns based on historical documents and ‘facts' can be construed differently depending on multiple variables, to include time and space. They can also be used and abused for political purposes

The campaign to declare the events of 1915 as genocide needs to be questioned and critically examined.

While closure and healing through recognition are an important part of progression, these two concepts are being manipulated to propagate a campaign for new legislation and "official recognition" of the Armenian events and they do not represent reality.

The Armenian campaign has little to do with history or healing and everything to do with politics. To put it bluntly, it is a political stunt aimed towards reparation, rights of return and the redrawing of Turkey's borders, the brain child of calculating politicians and a host of "genocide scholars" and a well-intentioned albeit ignorant public, particularly throughout Europe and North America.

An understanding of the genesis and fecundity of the Armenian campaign for genocide recognition can be found at the intersection of Armenian imagined memories of 1915, their transmission and the development of an Armenian diaspora identity which feeds off efforts to legislate history.

This has grave geo-political and legal implications, and the campaign's politicization of history is manifest contemporaneously from Turkey to Armenia and Europe to North America.

This identity-driven campaign and the implications of it are the subject of my new book. In it, I attempt to explore and deconstruct the campaign, its causes, its virility, its successes and its flaws. In short, it is the first in-depth study of Armenian and Armenian Diaspora identity as viewed via the prism of a historical trauma and the campaign it has spawned. The volatile mixture of Armenian identity as informed by trauma and an imagined history necessarily demonizes Turks and glorifies Armenians in a "self" versus "other" battle to the death. Put simply, Armenian diaspora identity, as developed over the past century, demands it. Yet the power of this identity, and the wealth and lobbying efforts associated therewith, are not the only variables at work and cannot possibly explain the overall success of the campaign to gain ad hoc legislation designating the events of 1915 as the "Armenian Genocide." In this they require willing, often cynical partners who accept Armenian claims of genocide for political and highly politicized purposes.

THE POLITICAL ECONOMY OF RECOGNITION

The politicization of historical events - tragic as those events may be - bleeds directly into the operational modes and methods of the Armenian campaign. The Armenian diaspora operates in and focuses on regions and states where natural strengths and allies exist. For example, in France and the United States where there exist relatively large number of French-Armenians and Armenian-Americans. But states with the proverbial axe to grind with Turkey are also a target and need little convincing to pass resolutions and legislation castigating Turkey and shaming it. Russia is a prime example. Greece, with Turkey and the Ottoman Empire as its historical "other" to the Greek "self," is another. These efforts often work in tandem with diaspora. For example, Greek diasporas generally support recognition of the Armenian Genocide because it plays to their identity-based prejudices against Turkey as transmitted generationally.

Elsewhere in Europe the case is slightly skewed. Yet it has no more to do with history, closure or offering succor to a grieving ethnic group than acts performed in Russia or Greece. When countries such as Austria or Italy reach economic or political impasses with Turkey or simply dislike the idea of Turkey in Europe, recognition of the Armenian Genocide becomes a very handy cudgel. This plays into the hands of politicians who cynically, but naturally look to receive a boost in support from their constituents. Italy's recognition that the events of 1915 constituted the Armenian Genocide came in 2000, right on the heels of a diplomatic dust-up with Turkey involving Italy's granting of asylum for Abdullah Öcalan, the leader of the PKK. An analysis of the legislation passed in Germany in June of this year is similarly instructive. A number of German politicians were incensed at Turkey's demands for visa-free travel to the European Union in exchange for managing the flow of refugees heading to Europe from Syria, Iraq and Somalia. With Turkey holding all the cards, German politicians played the only hand available to them: they attempted to humiliate Turkey by passing legislation recognizing the events of 1915 as the Armenian Genocide. That this legislation carries no legal heft makes no difference. Turkey has again been accused of the most egregious crime known to humankind based on the cynical and politicized calculations of German politicians who are unqualified to from either a scholarly or legal perspective to pass such judgements. The supreme irony is that these same politicians abrogated all responsibility for their votes, claiming they were only recognizing the terminology (the word "genocide" used in association with 1915) used previously by others in Germany, to include historians, deputies and civil society groups.

THE ROLES OF HISTORY AND GUILT

Yet, there is an equally interesting facet at play here and my book points out that this is not simply the work of a hyperactive Armenian lobby or cynical politicians. Rather, efforts at "Armenian Genocide" recognition are greatly assisted by many in the West who can be said to suffer from occasional maladies associated with historical guilt. Some are particularly keen to make amends for the laundry list of Western excesses - colonialism, genocide, slavery, ethnic cleansing, two World Wars - that characterized much of the nineteenth and twentieth centuries. Though the results of this prodigality is rarely, if ever, dealt with on a substantive level, symbolic acts of atonement and remembrance are viewed by some as suitable alternatives. In Europe, these often take the form of legislation or official commemorations such as International Roma Day or The European Day of Remembrance for Victims of Stalinism and Nazism. In North America, American liberals and their Canadian counterparts seem particularly keen to offer their support for recognition of traumatic events because it is the "right" thing to do. Recognition is felt to be a genuine and magnanimous gesture. As importantly, these acts partially assuage the West's guilty conscience without having to address any of their present-day manifestations and results.

These admittedly well-meaning, commemorative acts are thought to honor and bring closure to neighbors, friends and their relatives who are the descendants of traumas such as the events of 1915. Yet they also avoid the rather more difficult, expensive and politically sensitive demands that come from actually addressing historical traumas. In regards to the Armenian campaign, issues such as reparations and rights of return inherently need to be addressed should the events be classified as constituting a genocide. And herein lies the rather disingenuous nature of both the Armenian campaign and its cynical or well-intentioned allies. The campaign works with and exploits both politicians and common citizenry who support such moves because they are cheap, painless and ostensibly address historical grievances that occurred in a nebulous past and in a remote and misunderstood corner of the globe. In other words there is a cognitive dissonance and disconnection with the events of 1915 and the lives of supporters in Chicago or London. Yet many of these same individuals become squeamish when issues such as reparations for slavery or colonial excesses are raised. These issues are closer to home, so to speak, and therefore the historical record and accompanying narratives understandably appear more complicated, involved and potentially very expensive. Correspondingly, the issue of Armenian Genocide recognition becomes necessarily more complicated in Ankara than it would in Marseille or Buenos Aires. This is precisely because the costs are high (reparation, rights of return and ominously the potential redrawing of borders) and the biased narrative presented by the campaign is justifiably viewed with suspicion in Turkey - not only because of the costs associated therewith, but because of the baselessness of the campaign's accusations and the politicized legislation associated therewith. Indeed, what occurred tragically in 1915 - unlike the reality of slavery in the United States or Brazil - is disputed and accusations of genocide in relation to these events are either ignorant or disingenuous. Not only are the events more complicated with multiple groups (Turks and Armenian; Muslims and Christians) suffering immensely, characterizing them as a genocide carries direct and high costs - especially to those who are wrongly implicated - and disgraces one group (Turks) in order to assuage another group's (Armenians) humiliation and defeat.

As my book demonstrates, the multi-confessional, multi-ethnic Ottoman Empire finally and spectacularly tore itself apart in the years surrounding 1915 through episodes of ethnic cleansing pitting Christians against Muslims. While not a traditional history, the book does stitch together archival research and demographic records in relation to the disputed tragedy. In doing so, it readily becomes apparent that they bear no resemblance to a genocide of Armenians. A genocidal blueprint by the Ottoman state does not exist. This is because the Ottoman state lacked the desire, rationale and the wherewithal to destroy its Armenian citizens. Rather, tit-for-tat violence was visited upon entire regions and peoples as informed by more than a century of Christian nationalism - encouraged by Europe and Russia - that sanctioned the ethnic cleansing of centuries-old Muslim communities in the heart of Europe, the Crimea and the Caucasus.

The lesson here is that identities, narratives or campaigns based on historical documents and "facts" can be construed differently depending on multiple variables, to include time and space. They can also be used and abused for political purposes. The Armenian Genocide only exists in the imaginations of some Armenians and in their politicized campaign. Yet because Armenian diaspora identity insists that an Ottoman Turkish genocide of Armenians took place, the campaign continues to ignore conflicting historical documents, demographic records and books that directly confront the campaign and chip away at its unsteady foundation. The fact that the campaign is correspondingly assisted by cynical politicians on the one hand, and well-meaning, if ignorant and guilt-ridden individuals on the other, makes the spurious charges of genocide against Turkey that much more egregious and damning.