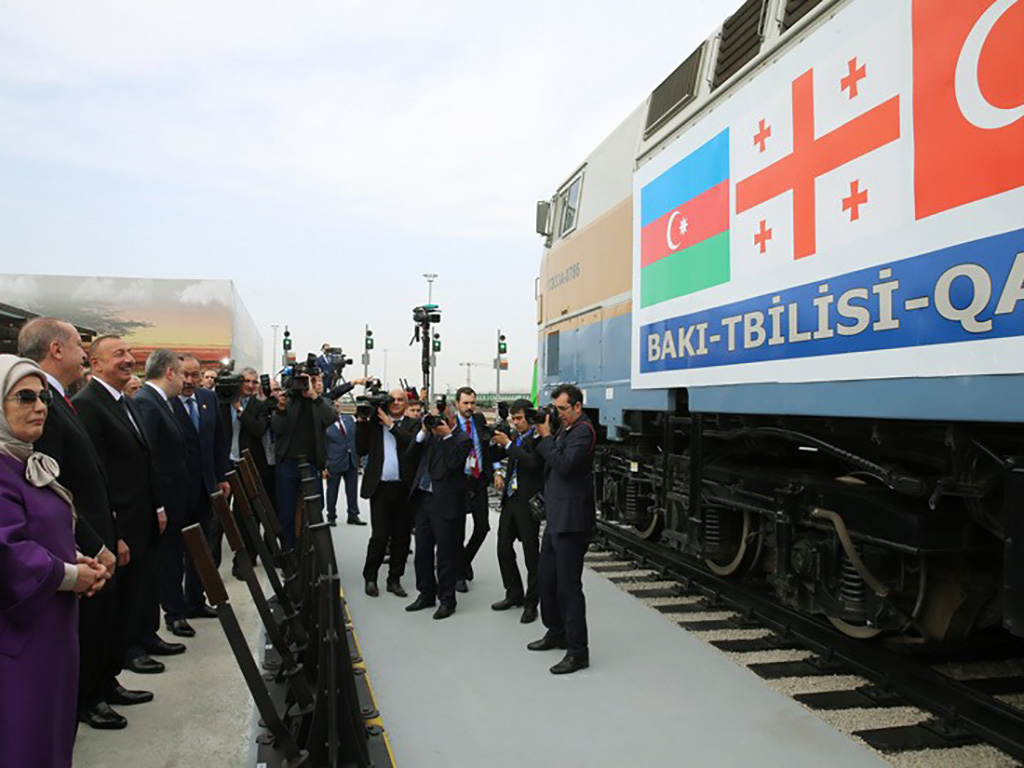 In late 2013, the President of China unveiled his plan to revitalize the ancient Silk Road trade route. This plan includes a land-based Silk Road Economic Belt (SREB) as well as a maritime Silk Road (MSR) that together are known as the One Belt and One Road (OBOR) Initiative. However, China is not the only country that will benefit from this cooperation among Eurasian countries, and Chinese goods will not be the only merchandise transported on the route.

A large section of this new 826-kilometer (500-mile) rail corridor, also known as Baku-Tbilisi-Kars (BTK) already existed. However, 105-km of track has been built to connect these countries directly to each other. This rail link will play a significant role in connecting countries in the East and West, and China is just one of them. The BTK railroad plans to transport 3 million passengers and 17 million tons of cargo by 2034. The trains leaving East Asia will traverse central Asia and reach the Khorgos Gateway in Kazakhstan. At that point the cargo can be shipped over the Caspian Sea by ferry to arrive at the New Port of Baku in Azerbaijan. It would be costly to build the facilities to receive this massive amount of cargo; likewise, there had been problems with financing for the project.

After the Bank for Reconstruction and Development, the World Bank, and the Asian Development Bank withdrew from the project, pointing to a pre-existing route that crosses through Armenia (and the U.S. pulled out due to Armenian lobby efforts), help finally came from Baku. The Sovereign Oil Fund of the Republic of Azerbaijan (SOFAZ) provided two loans totaling $775 million to Georgia to finish construction of the remaining 178-km portion of the railway system. The Azerbaijan investment has already paid a dividend.

The Azerbaijani trade volume has increased from $1.5 million in 1993 to $770 million in 2016. Azerbaijan is at the center of this trade route that impacts 60 countries in Central Asia, Europe, and Africa, which are major markets for the fast-growing economies in the Far East. Georgia, as a member of the BTK project, will also benefit from exporting to China. In 2016, Georgia's exports to China increased by 59.1%, reaching $138.9 million, which surpassed Russia as the second largest destination for Georgia's exports. The number one destination remains Turkey.

Turkey hopes that it will make a significant profit from transit fees. Even if it only receives 10% of the Asia-Europe freight traffic via BTK, that will mean 24 million tons of additional cargo. The economic boost to Turkey in areas like logistics, industrial output, and services will increase, creating more jobs for the country's 80 million people, who have experienced 1.6% population growth in 2016 compared to 1.2% in 2010. In addition, because of Turkey's easier access to the energy and oil derivatives flow from Central Asian producers, it is expected that faster economic cooperation and cultural exchange with these Turkic-speaking countries (as well as China) will occur. Also, these BTK-induced economic and cultural alliances could improve the peace prospects in the Caucasus.

In late 2017, the Azerbaijani Foreign Minister sent a positive signal to Armenia, announcing that if Armenian troops leave Karabakh, Baku will be ready to discuss cooperation and good relations between the countries. Economic opportunities, jobs, and other improvements from the BTK will extend to people living in areas such as the Javakh region, with its Armenian population in Southern Georgia, and the Nakhchivan and Karabakh regions in Azerbaijan. The BTK railroad could also be an engine of peace, by creating a framework for economic and socio-political cooperation among the countries in the region, especially in the north and south. The ties that BTK creates in various fields are becoming more and more evident as the project has grown since its inception in October 30, 2017.

The Port of Baku, as the centerpiece of the project, has experienced the largest growth rate in the volume of container traffic. Cargo transshipment reached 2 million tons in only the first half of 2018. There are no statistics available for the second half of 2018, but at that rate the Port of Baku would have transmitted 3,440,000 tons of containers for the year. This represents a 53% growth in container shipment in 2018 over the same period from the year before. Although this cargo transshipment is below the projected 17 million tons capacity for 2034, it is a significant achievement for 2018, especially considering the ongoing construction that is expanding the port's capacity.

Long distance trade using the BTK railway was very active in 2018. As one example, on July 2018 a cargo of iron and steel was loaded on cars leaving Magnitogorsk-Gruzovo and reached Payas in South Turkey after travelling 5,000 kilometers in 17 days. Besides long-distance trade, the activity between smaller countries along the BTK road increased in 2018. For example, trade between Astana and Ankara has been blossoming since the railroad began. So far, 110,000 tons of merchandise have been transported on the BTK railway between these two countries. The average cargo travel time between Turkey and Kazakhstan has been 180 hours, depending on conditions in the Caspian Sea.

To meet increased passenger demand, Azerbaijan Railways Closed Joint Stock Company signed a $133 million contract with Swiss Stadler to purchase 30 coaches (which was later renegotiated and reduced to 20 vehicles). Speed tests were completed in early 2019. Two locomotives from French Alstom Transportation S.A. were purchased in October 2017, but for a more affordable and sustainable solution, it has been decided in the future to manufacture locomotives locally. To this end, in December 5, 2018, the Turkish transportation and infrastructure minister announced that Turkey and Azerbaijan will jointly produce freight cars for BTK.

Looking ahead, BTK will provide the countries involved and their neighbors with historic economic and political opportunities. Economic cooperation will bring prosperity to the fast growing local economies and populations of the region, as well as bringing countries together on better terms, and hopefully creating an environment of peace and cooperation among them

The author is an Associate Faculty in the Department of History at Saddleback College, California; his research interests include the modern Middle East, political economy, environmental policy, energy policy and international relations. Dr. Yeganehshakib completed his Ph.D. in history at the University of California, his M.S. in Environmental Studies at California States University, and his B.S. in Chemical Engineering at the Islamic Azad University of Iran. We are grateful for his permission to reproduce this piece.